Maddow breaks down legal peril facing Trump for financial document lies: ‘This isn’t like lying about your hand size’ 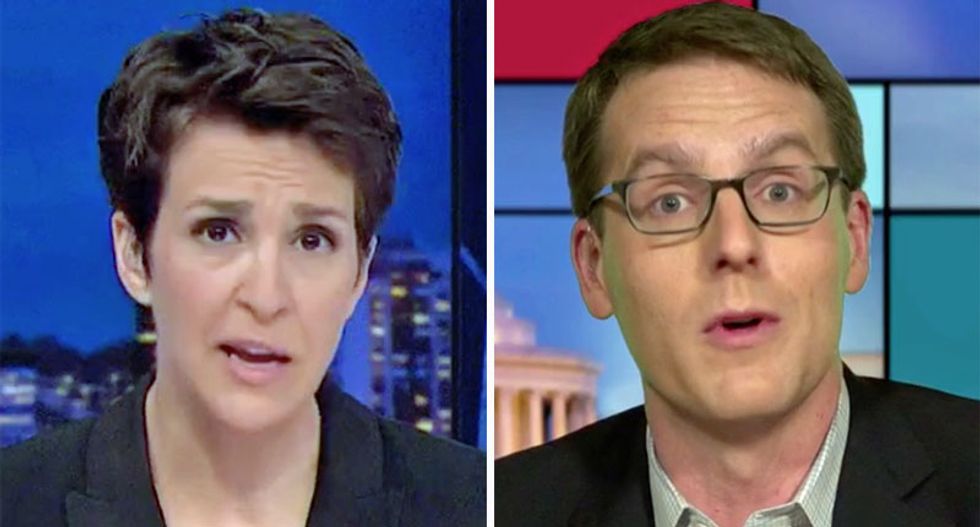 "When The Washington Post dug up financial statements from President Trump for a scoop today that shows how much Trump regularly exaggerated assets and his wealth in documents to potential investors and journalists and other people he wanted to impress, on one hand that was yet another example of the president telling lies about provable things," Maddow noted.

"On the other hand, though, this isn't exactly lying about your hand size," Maddow joked.

"This feels a little bit like some of the stuff that Michael Cohen laid out in his bombshell testimony before Congress a couple weeks ago where he talked about the president playing down liabilities in order to try to get loans from banks or to try to reduce his insurance premiums," Maddow noted.

"That seemed like potential legal jeopardy because the banking industry and insurance industry are tightly regulated and lying to those institutions can send you to jail, which Michael Cohen is about to do," she explained.

"In the short term, it is a legal problem," Fahrenthold noted. "In the last few weeks -- since Michael Cohen testified -- we've seen subpoenas that to Trump's lender Deutsche Bank and Trump's insurer and some document requests from the Oversight Committee, basically asking folks that Cohen said Trump influenced with these inflated statements, asking to provide documents about how exactly they were influenced and what Trump told them," he explained.

"I don't know in the long term, will this lead to civil charges, a lawsuit, will there be something criminal?" he wondered. "That's way in the future."

"Already, we've seen this issue go from kind of an issue as you said of character or morals into a legal issue as these investigators start to dig in," Fahrenthold observed.

"One of the ones you mentioned earlier is a $72 million error. Trump said he had 24 more home lots to sell in California than he did and he said he was going to sell them at $3 million a piece," he reported. "So if you look at Trump and think here's a guy who's got $72 million worth of future cash flow he really doesn't have, that could be a material distinction."