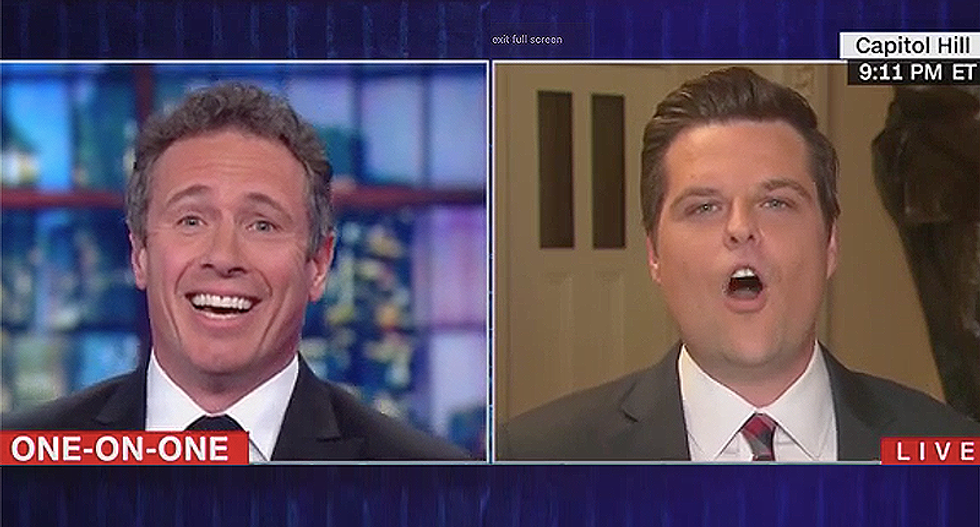 In a Tuesday CNN's Chris Cuomo epically owned Rep. Matt Gaetz (R-FL) while he was trying to excuse away crimes from Paul Manafort and others in the line of fire of special counsel Robert Mueller.

The two launched into a throwdown over what amounts to talking points that seem to be repeated by many allies of President Donald Trump. Reports have said that the White House is setting up a war room with ways to attack Mueller when his final findings are released, anticipating the worst.

Gaetz seemed to get mixed up in the talking points when he both attacked Mueller and his investigation, while also touting him for not indicting Manafort for conspiracy with Russia to elect Donald Trump.

Cuomo, who served as ABC News' justice correspondent, debated with Gaetz about evidence and degrees of the crimes. The Congressman tried to make the case that if the crime wasn't a felony then it was "fine." Cuomo maintained that's not the legal standard prosecutors look to.

"It has been proven. He gave the polling data to a bad guy connected to Russian intelligence, the trolls wound up targeting the same places and faces," Cuomo said.

"It's not conspiracy," Gaetz claimed.

"Matt, Congressman, pick your poison," Cuomo cut in. "Either, if it's not a crime, you don't want to talk about it and leave the president alone, or you want to change the rules to tighten the screws down more on exactly what your guys did. Which is it?"

Gaetz claimed that no one has proven in a court of law that Manafort conspired with a foreign government, but Cuomo maintained that's exactly what Mueller has said.

"Oh, so because Mueller's -- so Mueller who along with a team of people who've donated to the Clinton campaign --" Gaetz rattled off the Trump talking points.

"Oh, here we go," Cuomo said, exasperated. "Bob Mueller is more Republican than you've ever been on your best day."

Gaetz went on to attack Mueller, but Cuomo noted that Manafort's lawyers never denied any of the claims made. The Florida Congressman went on to claim that Jerome Corsi said that Mueller tried to get him to lie about something, which has never been proven, there's no evidence of, and no one has been able to corroborate.

The two argued about Republicans voting to prosecute President Bill Clinton during the 1990s "for having sex in the Oval Office," Cuomo said. Gaetz said he was in high school at the time and not in Congress, but Cuomo said that had Gaetz been there, he bets the Congressman would have voted for Clinton's impeachment.