Netanyahu defiant after decision to indict him ahead of polls 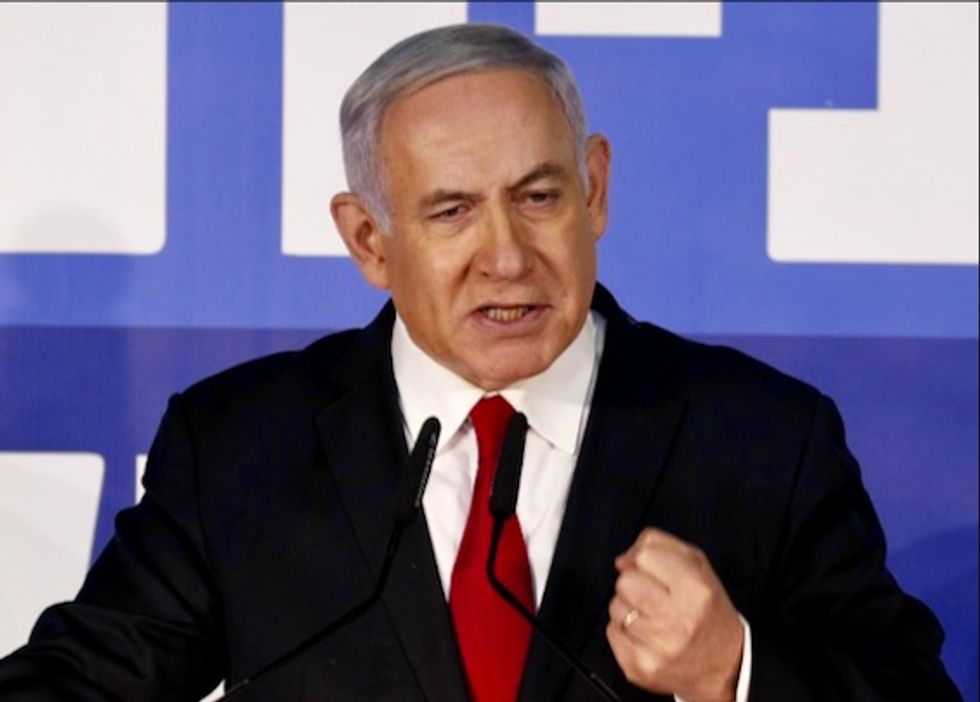 Prime Minister Benjamin Netanyahu's long reign atop Israeli politics has earned him the nickname "King Bibi," but a decision ahead of April elections to indict him on corruption charges may be his biggest challenge yet.

After Israel's attorney general announced Thursday night he intended to charge the prime minister with bribery, fraud and breach of trust pending a hearing, Netanyahu showed characteristic defiance in a televised statement.

He blamed his political opponents for what he called a "witch hunt" intended to force him from office -- though he appointed the attorney general who issued the decision.

In the 20-minute statement, a campaign banner reading "Netanyahu Strong Right" behind him, he called the investigations a "house of cards" meant to "influence the elections."

"Netanyahu will not resign," said Ilan Greilsammer, political science professor at the University of Tel Aviv.

"There is a family-like culture in Israel, and for Likud's electoral base, Netanyahu is family," he said of the premier's right-wing party.

Netanyahu is not legally required to resign if indicted, only if convicted with all appeals exhausted.

AFP / Gali TIBBON "Netanyahu Strong Right" reads the campaign banner behind the Israeli prime minister, who faced a serious challenge from a centrist alliance led by the former armed forces chief in an April 9 election even before the attorney general's announcement

But the announcement by Attorney General Avichai Mandelblit comes with Netanyahu facing a serious challenge from a centrist political alliance led by former armed forces chief of staff Benny Gantz in an April 9 general election.

Should he win in April, he will be on track to surpass founding father David Ben-Gurion's record of more than 13 years in office.

The burly 69-year-old with his familiar grey comb-over has entrenched himself at the top so firmly he has been labelled "King Bibi", his nickname dating to childhood.

Much of his popularity has to do with another nickname -- "Mr. Security" -- in a country where such issues are always on voters' minds.

He has sought to discredit Gantz in part by calling him a "weak" leftist despite his military background and the fact that his alliance features three former armed forces chiefs of staff.

Netanyahu frequently highlights Israel's actions against Iran in Syria, a reference to hundreds of air strikes there against his country's main enemy and Tehran-backed Hezbollah.

He often seeks to avoid talking about the Palestinians apart from security operations, with prominent members of his right-wing coalition openly ruling out a two-state solution.

Netanyahu was born in 1949 in the then-nascent state of Israel around a year and a half after it was created.

He and his wife Sara have two sons, and he has a daughter from a previous marriage.

The son of a history professor active in Israeli right-wing politics, Netanyahu grew up partly in the United States.

He attended the prestigious Massachusetts Institute of Technology, and with his fluent, American-accented English would appear on television speaking forcefully in defence of Israel.

He performed his Israeli military service with an elite unit and was wounded in combat, but another family member's service may have affected him more deeply.

In 1976, his brother Yonatan died in an Israeli commando raid to rescue hostages in Uganda.

Netanyahu has called the operation "a very dramatic national experience" and "one of great personal consequence."

Israeli politics in its early years was dominated by the Labour party, but the first victory by Likud, then led by Menachem Begin, in 1977 helped lay groundwork for Netanyahu's political future.

His career took off when he was posted to Israel's Washington embassy and was later ambassador to the United Nations.

He became Israel's youngest prime minister in 1996, at 46, but was defeated three years later.

Netanyahu would return to office in 2009 and has remained ever since.

AFP/File / THOMAS COEX Netanyahu, who already leads what is seen as the most right-wing government in Israel's history, has moved even further to the right, brokering a deal that will potentially see Jewish Power, a party widely seen as anti-Arab. entering parliament

While Israel's economy has grown under his watch and his security credentials have shored up his right-wing base, many call his politics too divisive.

They accuse him of scare tactics and pitting Israelis against themselves by castigating those who disagree.

As the investigations have closed in, he has moved further to the right, brokering a deal last week to boost a party many see as racist in upcoming elections.

"The risks that he creates in the society, it will take many, many years to amend them because he's just taking all the assets of Israel as captive in his own struggle for survival," said Gayil Talshir, political science professor at Jerusalem's Hebrew University.

"It's a very sad day for Israeli society."