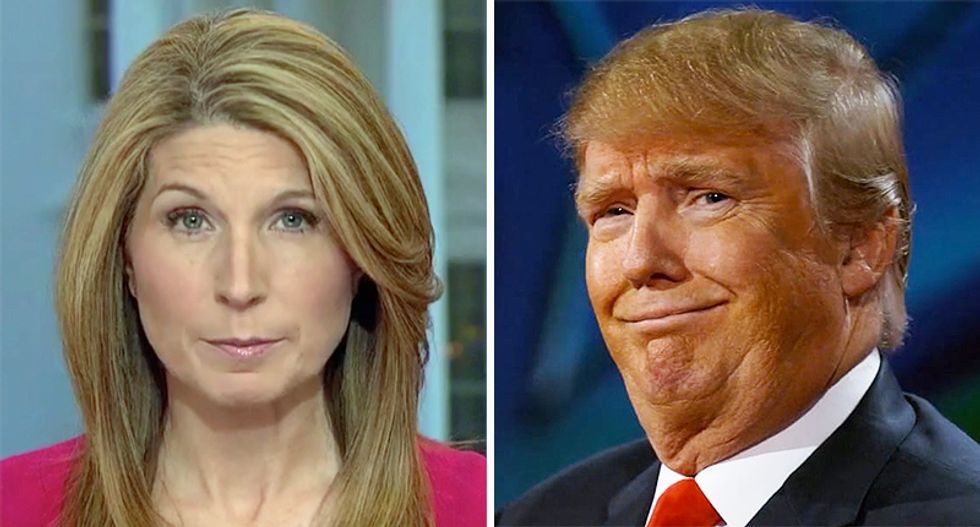 MSNBC anchor Nicolle Wallace broke down how indicting the Trump organization as a "criminal enterprise" could allow prosecutors to take down President Donald Trump's "entire empire."

"A legal theory that has long been whispered about by legal experts and veteran prosecutors has spilled out into the open in the wake of Michael Cohen's explosive testimony -- the possibility that Donald Trump and the Trump Organization are being investigated as a criminal enterprise," Wallace reported on MSNBC's "Deadline: White House" on Tuesday.

"The undercurrents have been there all along, with federal law enforcement officials and lawmakers comparing Donald Trump's conduct to that of a mob boss," she continued.

The host then played clips from people close to the organization making the argument.

"It's like, you know, a "Sopranos" episode where Tony is going to a poorly-lit [sic] parking garage and meeting with a leader from another mob," suggested Rep. Eric Swalwell (D-CA), who sits on the Judiciary Committee and the House Permanent Select Committee on Intelligence.

"This is classic kind of criminal enterprise behavior, right? You have a very -- a strong leader who rules by force of will and personality, who demands unquestioned loyalty from those people around him," former FBI Deputy Director Andrew McCabe charged.

She also played a clip of former FBI Director James Comey explaining how "very strange" it was for him to compare the president of the United States to a mafia boss.

Wallace then introduced a New York Times column by Garrett Graff that she described as explaining, "how pursuing Trump-world as a mob operation could take down Trump and his entire empire."

"Indicting the whole Trump Organization as a 'corrupt enterprise' could also help prosecutors address the thorny question of whether the president can be indicted in office; they could lay out a whole pattern of criminal activity, indict numerous players — including perhaps Trump family members — and leave the president himself as a named, unindicted co-conspirator," Graff explained.

"Such an action would allow investigators to make public all the known activity for Congress and the public to consider as part of impeachment hearings or re-election," Graff continued. "It would also activate powerful forfeiture tools for prosecutors that could allow them to seize the Trump Organization’s assets and cut off its income streams."

"It's in the context of this devastating legal peril that the president appears to be spiraling into meltdown mode, tweeting, 'presidential harassment' in his outside voice as a refrain and publicly attacking the numerous investigations into his conduct that are now encircling the White House, his family, his business and his closest allies."

Frank Figliuzzi, the former assistant director for counterintelligence at the FBI and a MSNBC contributor, explained the mechanism for going after Trump as a mafia don -- the Racketeer Influenced and Corrupt Organizations Act, known as RICO.

"There's a way we address mob families and organizations and it's called RICO," he explained.

"The basic notion is that the sum is greater than the parts," he explained. "So you can go ahead and attack an organization by hitting individuals with prosecutions on this charge and that charge -- and it's very unwieldy and takes a long time and then you really never essentially get to the boss."

"RICO is designed to get to the boss, because if you charge the underlings and they don't talk because they use the omertà code -- the code of silence -- we've seen that even in this organization, then you may never get him," he continued. "So RICO says, look, all of this together is much larger than the individual parts, and there's a leader behind this. And that's what RICO's designed to do."

"This was essentially a mob informant talking about the [caporegime] and I'd be surprised if Southern District or some other prosecution arm is not seriously approaching this as a RICO," Figliuzzi concluded.