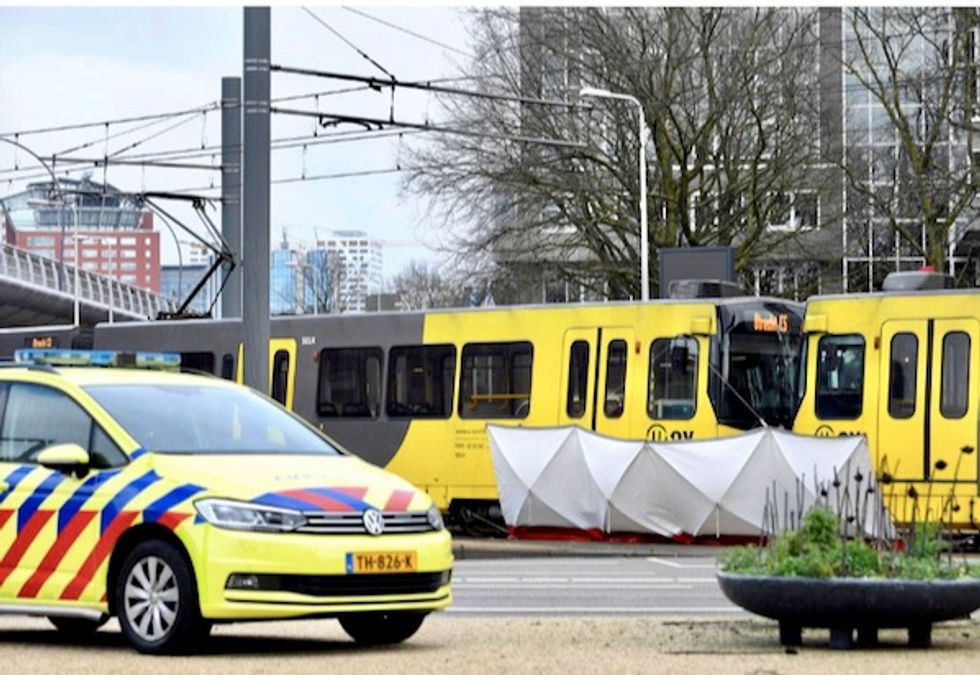 The site of a shooting is pictured in Utrecht, Netherlands, March 18, 2019. REUTERS/Piroschka van de Wouw

Dutch police launched a huge manhunt for a gunman who killed three people and wounded nine others on Monday in a suspected terror attack inside a tram in the city of Utrecht.

Police issued a picture of Turkish-born suspect Gokmen Tanis, 37 and warned the public not to approach him, as armed counter-terrorism officers surrounded a nearby building.

Dutch Prime Minister Mark Rutte said a terror attack "could not be excluded", vowing that the Netherlands would "never give way to intolerance".

Security forces were on high alert at airports and mosques following the shooting, after which a body covered in a white sheet could be seen lying on the tram tracks.

"We are working on the principle that it was a terrorist attack," Utrecht Mayor Jan van Zanen said on Twitter.

"At this stage, we can confirm three deaths and nine wounded, three of them seriously." Police also confirmed the toll.

The head of the Dutch national counter-terrorism service, Pieter-Jaap Aalbersberg, said that a "major police operation is under way to arrest the gunman", adding there had been shooting at "several locations" including the tram.

The terror alert level in Utrecht was raised to maximum level five, he added.

One witness told NOS News they had seen an injured person running out of the tram with blood on her hands and clothes who then fell to the ground.

"I brought her into my car and helped her. When the police arrived, she was unconscious," the witness, who was not named, told the broadcaster.

- 'Attack on our civilisation' -

Dozens of armed police plus canine units later surrounded a building a few hundred metres away, an AFP reporter at the scene said, but it was not clear if the gunman was inside.

Police said they believed a red Renault Clio had been carjacked around the time of the shooting and had been found abandoned later.

The Utrecht municipality said it advised "everyone to stay indoors until more is known. New incidents are not excluded." The local hospital said it had set up a crisis centre.

ANP/AFP / Ricardo Smit The Netherlands has been largely spared the kind of attacks which have rocked its closest European neighbours in the past few years, but there has been a series of recent scares

Tram traffic in the area was halted.

The Dutch military police said they were on "high alert" and were boosting security at the airports and at other vital buildings in The Netherlands including parliament and Rutte's office.

Mosques in Utrecht shut for the day following the attack, the ANP news agency said, which comes just days after 50 people were killed at two mosques in New Zealand in a rampage allegedly carried out by a white supremacist.

Police in the port city of Rotterdam also said they had increased security outside mosques.

All major political parties including Rutte's VVD announced that they were suspending campaigning ahead of local elections on Wednesday which will determine the make-up of the Dutch senate.

"An act of terror is an attack on our civilisation, on our tolerant and open society. If this continues, only one answer is appropriate. And that is that our rule of law and our democracy are stronger than fanaticism and violence," Rutte told a brief press conference in The Hague.

"We will not give way to intolerance. Never."

"The EU stands side by side with the Netherlands and its people during these difficult times. My thoughts are with the wounded and their families," European Commission chief Jean-Claude Juncker said after speaking with Rutte.

British Foreign Secretary Jeremy Hunt said it was "hugely concerning news of a gunman opening fire on a tram in Utrecht, no doubt with innocent people just getting on with their day... The UK stands with the people of the Netherlands."

The Netherlands has been largely spared the kind of attacks which have rocked its closest European neighbours in the past few years, but there has been a series of recent scares.

In August, a 19-year-old Afghan with a German residence permit stabbed and injured two American tourists at Amsterdam's busy Central Station before being shot and wounded.

In September, Dutch investigators said they had arrested seven people and foiled a "major attack" on civilians at a major event in the Netherlands.

They said they had found a large quantity of bomb-making materials including fertiliser likely to be used in a car bomb.

The men were arrested in the cities of Arnhem and Weert.

In June, two terror suspects were arrested while close to carrying out attacks including at an iconic bridge in Rotterdam and in France, prosecutors said.

The men aged 22 and 28, who were of Moroccan origin, made a film at the Erasmus bridge in which they sang a martyrdom song, they said.