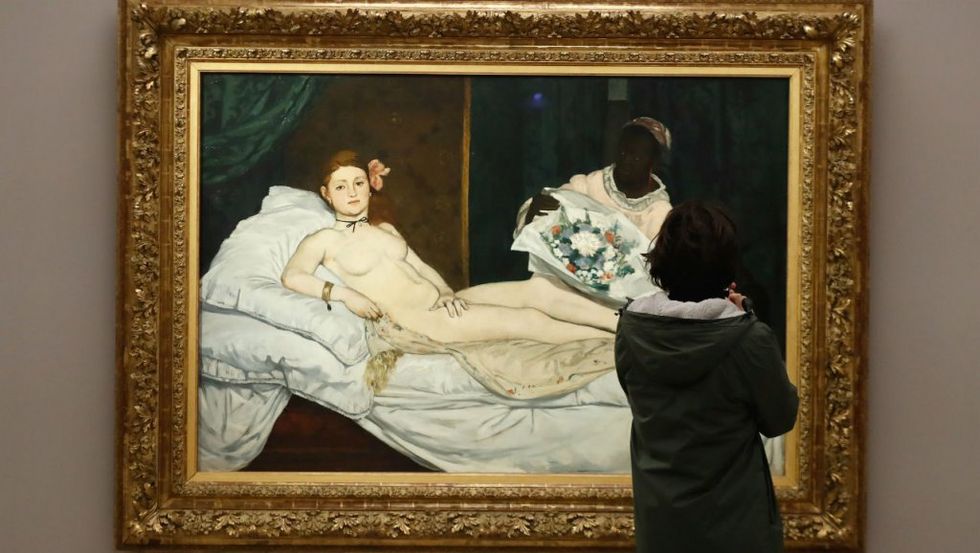 François Guillot, AFP | "Olympia" (1863) by French artist Edouard Manet, renamed "Laure" for the exhibition "Black models: from Gericault to Matisse" at the Musee d'Orsay in Paris.

French art masterpieces have been renamed after their long-overlooked black subjects in a new exhibition at the Musée d’Orsay that shows how black people played a major role in the Paris avant-garde scene but were then written out of the story.

The curators of "Black Models: From Gericault to Matisse" – which opened Tuesday at the Musée d’Orsay – turned historical detective to hunt down the identity of the models for some of the museum's most famous works.

They include Manet's "Olympia", the scandalous painting of a naked reclining prostitute, often described as marking the birth of modern art, which has been rebaptised "Laure" after the woman who posed as her black maid.

The enormous exhibition with paintings by Delacroix, Gauguin, Picasso, Bonnard and Cezanne tackles the depiction of black and mixed-race people in French art from the country's final abolition of slavery in 1848 until the 1950s.

American scholar Denise Murrell, whose doctoral thesis inspired the show, said the exhibition reveals how black people played a major role in the birth of modern art in Paris, only to be later written out of the story.

"There was a black presence in avant garde circles when artists and writers defied convention,” Murrell told AFP, citing Jeanne Duval, the "Black Venus" who was mistress and muse to the poet Baudelaire and was also painted by Manet, along with Cuban singer Maria Martinez and the novelist Alexandre Dumas, the author of "The Count of Monte Cristo".

But the influence of people of colour has been eclipsed from art history by racism and stereotyping, Murrell said.

Instead their identities have been hidden behind "unnecessary racial references", the US scholar added, such as negress or mixed-race "mulatresse" – a term derived from the French word for mule.

Written out of art history

Murrell and her fellow curators have revealed the subjects' real names in new titles for the show, "which would have been the case if they had been European", she added, with the historic titles relegated to the second line.

The tone is set from the stunning opening "Portrait of a Negress" – renamed "Portrait of Madeleine" for the show – painted by Marie-Guillemine Benoist in the short period between the French Revolution's abolition of slavery in 1788 and Napoleon reinstating it in 1802. 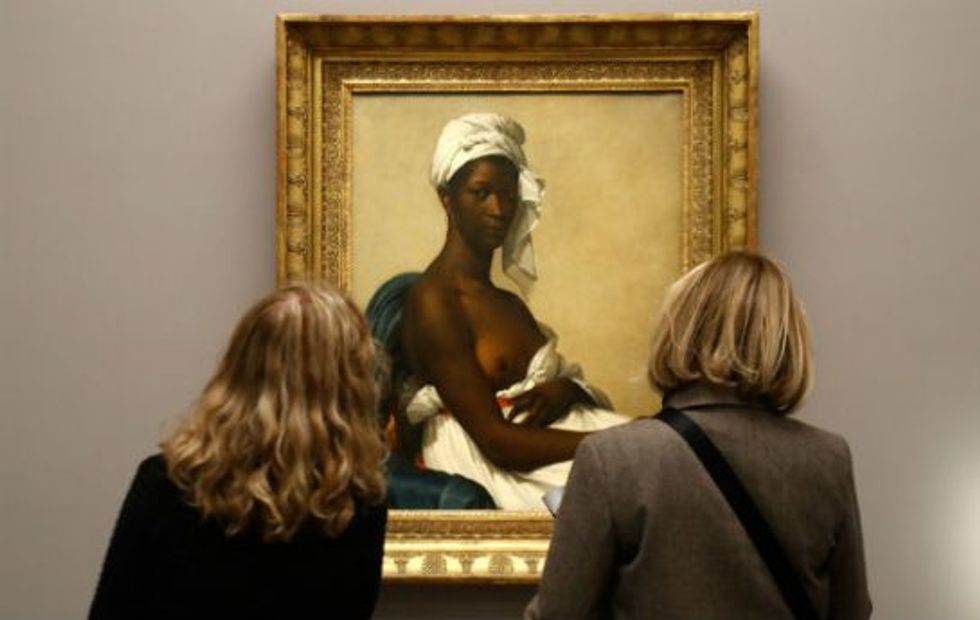 "Portrait of a Negress" – renamed "Portrait of Madeleine" for the show – by Marie-Guillemine Benoist. François Guillot, AFP[/caption]

"This is emblematic. It was art history that left them out. It has contributed to the construction of these figures as racial types as opposed to the individuals they were," she added.

Yet black people featured in some of the greatest artworks of the period, with Gericault giving three the starring roles as desperate shipwrecked sailors in his masterpiece, "The Raft of the Medusa".

The painter's favourite model, an art-loving Haitian called Joseph, the heroic figure on the raft, finally gets his place in the limelight in the Paris show, which also pays tribute to campaigning work that abolitionist artists like Gericault did to end slavery.

Abolition, as Cezanne's "The Negro Scipio" demonstrated, did not mean the end of discrimination and despair.

Until a wave of volunteers from France's African colonies fought in the trenches of World War I, black Parisians were often confined to working as servants, circus performers, prostitutes, nannies and wet nurses, with black women's milk thought to be richer and more nutritious.

Even as the US dancer Josephine Baker became a massive star in 1920s France, black models were still largely nameless and labelled as racial types, including those who sat for the jazz fan Matisse, who had travelled to New York to soak up the Harlem Renaissance of black culture.

His three black and mixed-race models, who included a well-known actress and journalist, finally get their due in the show.

But it is Manet's black maid who is its real star.

She appears in no less than eight takes on his canvass, including two modern versions: "Olympia in Black Face" by the American Larry Rivers and the Congolese artist Aime Mpane's even wryer "Olympia II", which turns the tables with a white servant offering a bouquet containing a skull to her black boss.

"Black Models: From Gericault to Matisse", a massively expanded version of a show last year at New York's Wallach Art Gallery based on Murrell's doctoral thesis, runs until July 21.

American ice cream brand Ben & Jerry's said Tuesday it is suing its parent company Unilever to block a move that would see its product sold in West Bank settlements, which would run counter to its values.

The company, known for its political activism, took the unusual step seeking an injunction after London-based Unilever last week announced it had sold its interest in the ice cream to Israeli license-holder Avi Zinger.

A 21-year-old man who allegedly opened fire on a July 4 parade in a Chicago suburb while disguised in women's clothing was charged with seven counts of first-degree murder on Tuesday, prosecutors said.

Robert Crimo, 21, was arrested Monday, hours after the attack on an Independence Day crowd.