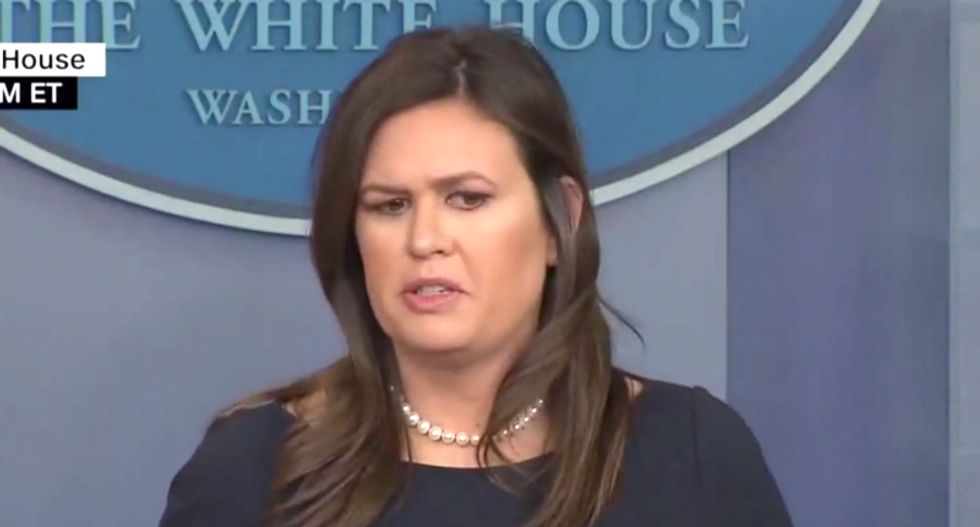 White House Press Secretary Sarah Huckabee Sanders was unable to handle multiple questions about President Donald Trump's accusations that it is Democrats that are the party of anti-Semitism, despite numerous instances of the same from the Republican Party and from the president himself.

First at bat was ABC's Jonathan Karl, who recalled Trump's tweets over the weekend, accusing Democrats of being "the anti-Jewish Party," and asked Sanders outright, "does the president really believe that Democrats hate Jews?"

"The President has been an unwavering and committed ally to Israel and the Jewish people," said Sanders, neglecting Trump's praise for the "very fine people" who marched in Charlottesville, Virginia with torches while chanting "Jews will not replace us." She tried to compare Minnesota Democratic Congresswoman Ilhan Omar to Republican Steve King, lost his committee assignments as a result of racist statements, but Karl noted that the president himself "has not condemned" King. Sanders had no answer for that.

Next up was MSNBC's Hallie Jackson.

"I didn't hear you actually answer the question, so yes or no," Jackson said. "Does the president truly believe that Democrats hate Jews?" Again Sanders tried to sidestep the question, saying she wasn't going to comment on "a potentially leaked item" and continuing to insist Democrats are anti-Semitic.

"So I want to be very clear, you're not answering the question," shot back Jackson. "Is there a reason?"

"I believe I answered it twice --" Sanders began, but Jackson cut her off.

"You didn't say yes or no. Does he really believe Democrats hate Jews?" Jackson pressed.

"I think that's a question you ought to ask the Democrats," Sanders replied.

Finally, CNN's Jim Acosta got his chance to step up to the plate.

"Just to get back to John and the question about the president's comments about Democrats and Jewish people, isn't that kind of rhetoric just sort of beneath everybody?" Acosta asked.

"Do you think that the president has thought at all going into this 2020 campaign that the rhetoric just needs to be lowered, whether it's talking about Democrats, the media, immigrants," Acosta continued, "or should we just plan on hearing the president use the same kind of language we heard in 2016 and all through the first couple of years of his administration?"

"Look, I think the real shame in all of this is that Democrats are perfectly capable of coming together and agreeing on the fact they're comfortable ripping babies straight from a mother's womb or killing a baby after birth," said Sanders, deliberately escalating the rhetoric. "The president has been clear on what his position is." Acosta wasn't having it.

"Don't you think that just sort of drags down the rhetoric and debate, when you're saying something that's just patently untrue?" Acosta said, as Sanders tried to talk over him. "Democrats don't hate Jewish people. That's just silly. It's not true."