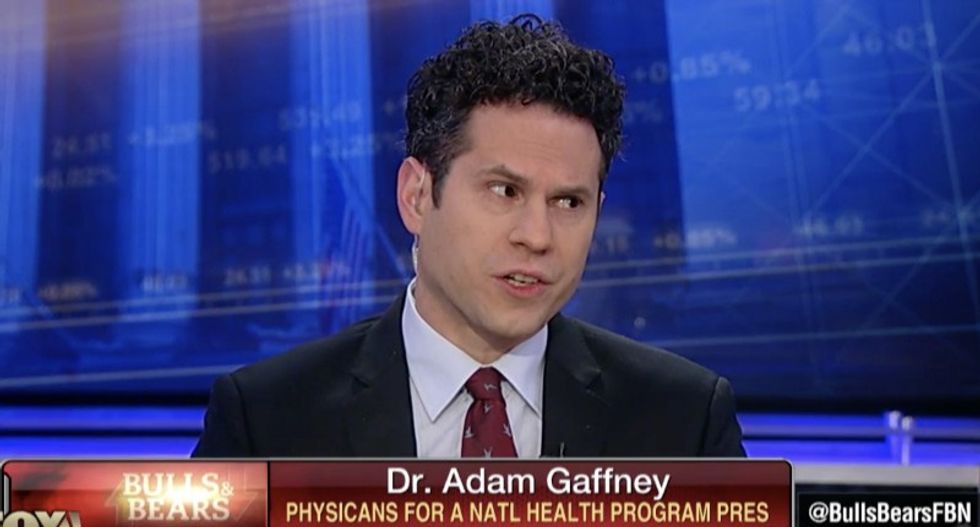 Amid mounting excitement over new Medicare for All legislation unveiled this week, Dr. Adam Gaffney took on a panel of skeptics at Fox Business Network on Friday, delivering a widely celebrated argument for why U.S. lawmakers need to heed the growing public demands to replace private for-profit health insurance with a national single-payer system.

"Guys, you MUST watch this," tweeted Briahna Joy Gray of The Intercept. In the nine-minute segment, she said, Gaffney "makes one of the best cases for single payer I've ever seen."

Noting that every other highly developed nation has universal healthcare, Gaffney pointed out to the panel that "overall, the healthcare systems of these countries are quite high quality. Overall, they have higher life expectancies than we do; they have lower infant mortality... Overall, these nations achieve better results with less money."

Asked why a free market system for healthcare can't work "like it does with auto insurance," he said:

I work in an intensive care unit. I've seen people come in with life-threatening complications 'cause they couldn't afford care... I don't want to see that anymore, and we need, as a nation, to decide that that's not going to be acceptable.

Gaffney is an instructor at Harvard Medical School, and a pulmonologist and critical care physician at the Cambridge Health Alliance. He also serves as president of Physicians for a National Health Program (PNHP), which advocates for implementing a single-payer healthcare system in the United States.

The Fox Business Network segment aired just days after Rep. Pramila Jayapal (D-Wash.) introduced the Medicare for All Act of 2019. The bill has been praised as precedent-setting in terms of guaranteeing healthcare as a human right and is endorsed by PNHP.

In statement supporting Jayapal's legislation and denouncing what critics often call "Medicare for Some" proposals, Gaffney said, "Accept no substitutes—only single-payer, Medicare for All can fix the grave dysfunctions and injustices of the American healthcare system."

"Congress shouldn't be distracted with incremental plans like a Medicare buy-in or public option," he added. "The only way to achieve universal and comprehensive coverage is to eliminate the profits and waste of the private insurance industry, which drains hundreds of billions of dollars from our healthcare system each year."

The current profit-driven system in the United States "is failing both physicians and patients," Gaffney concluded. "We can do better. In fact, we have to: The health and future of our nation hangs in the balance."