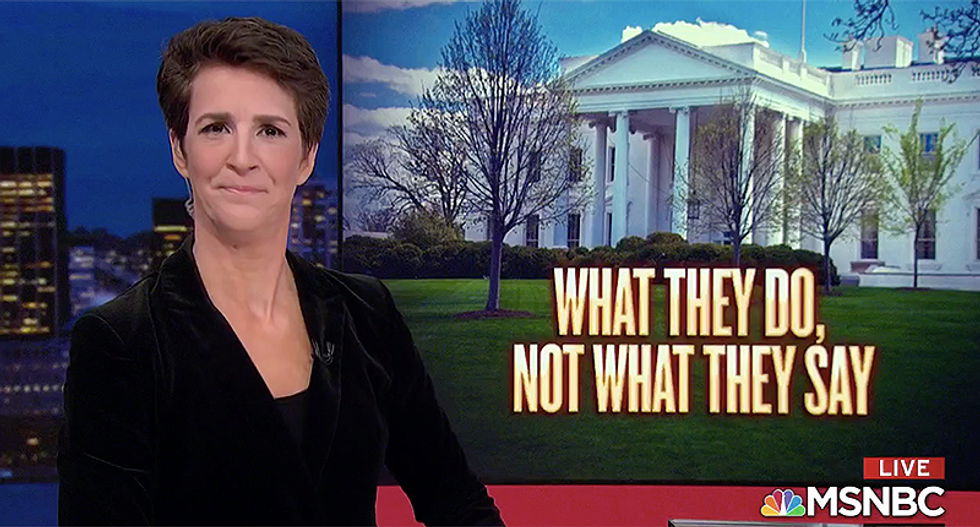 Vice President Mike Pence seems to want his own amazing moment, like former President John F. Kennedy, who announced in 1962 that "we will go to the moon and do the other things, not because they are easy, but because they are hard. Because that goal will serve to organize and measure the best of our energies and skills, because that challenge is one that we are willing to accept, one we are unwilling to postpone, and one which we intend to win, and the others, too."

JFK's moonshot was huge because we'd never been to the moon. Mike Pence's moonshot was just weird. The whole thing prompted MSNBC host Rachel Maddow to break into hysterics.

"This is an iconic, indelible moment, not just because it was a well-delivered line, but because in retrospect, in hindsight looking back on that moment, we now know what JFK was setting in motion," she said during her Wednesday show. "He really was setting in motion putting a man on the moon. And now here's the Trump administration version of that, which is happening right now."

If Kennedy could make world history in 1962, Maddow said that Mike Pence was trying to do it again in 2019.

Pence admitted to it in his speech, that just moments before he took the stage Administer Jim Bridenstine said: "we have a plan to return to the moon." To make matters worse, Pence didn't even pronounce Bridenstine's name correctly, calling him "Bridensteiner."

"Mike Pence only heard about this going back to the moon idea five minutes ago, but this speech sounds really good if you conduct that in there," Maddow chuckled. "But you know, make sure you get my good side when you shoot this for the newsreels and the time capsules. This is what presidents and vice presidents are supposed to talk like, right?"

Just two weeks ago, President Donald Trump proposed a budget that dramatically cuts the funding to NASA. On the current Trump budget he has outlined, there's no chance NASA could go to the moon unless it's on a Volkswagen bus with wings.

But this announcement from Pence isn't the only big plan that the administration has announced.

Maddow explained that in the past two years of his presidency, Trump has announced he's doing great things and signed executive orders, but they're not actually doing what he says they're doing. In fact, they're doing very little.

"I think they think that if you just give the speech, if you just make the announcement, that's enough to get credit for it if people don't pay attention to the fact that you don't actually mean it," Maddow said.

Trump announced the denuclearization of North Korea, which hasn't denuclearized and has been caught continuing to build missiles. Apparently, ISIS is now defeated, according to Trump. Not according to commanders on the ground. Just five days before Trump was inaugurated, he announced that healthcare would be given to everyone in the country. The way it will work is that the hospitals will bill the government and the government will pay the bills. Two years later, that doesn't seem to be the case.

Trump also signed an executive order saying that American steel will be used on all pipeline projects, which also isn't happening. There's no law requiring it. The president went to a rally in rural America where he announced that he has established rural broadband across America. Anyone living outside the cities knows that they're going to have to go make a sandwich before they can watch this Maddow video below. This writer can confirm that rural Oklahoma does not have high-speed broadband in all rural areas.

"It's like they don't know it's not historic, it's not an iconic moment if it's not real," Maddow said. "But they want the announcement. They want what appears to be the big moment."