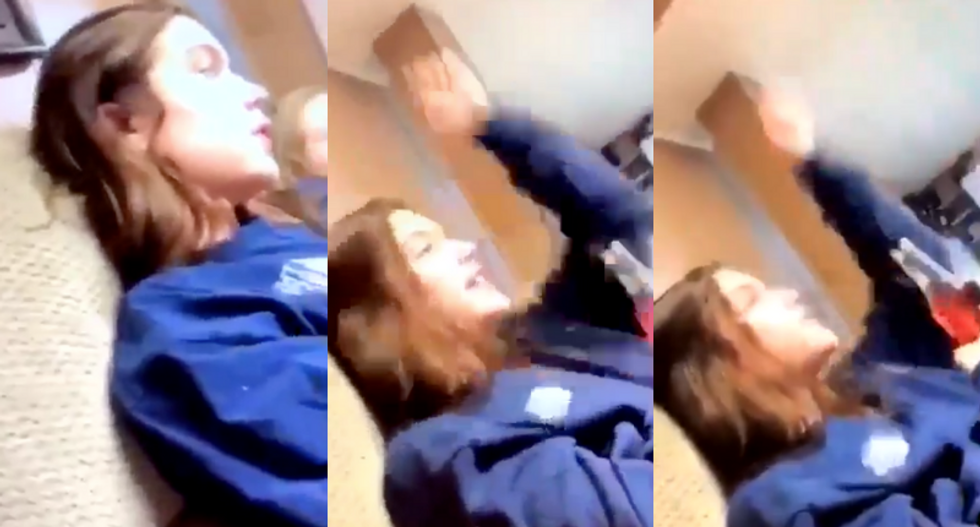 A high school student in a St. Louis suburb chants about "slavery" in viral video. Images via screengrab.

A video of a group of teens drinking and chanting about slavery has gone viral in the St. Louis community — and it's unclear what, if anything, the school plans to do about it.

St. Louis' KPLR reported that the principal at the suburban Parkway Central High School emailed parents a statement he read during an announcement to students after some of their classmates were recorded making the racist remarks over spring break.

In the video, which was recorded and posted on Snapchat, the high school girls are seen writing a racial slur while reciting it and later chanting "slavery, slavery, slavery!" while holding what appear to be alcoholic beverages in their hands.

In a post about the incident, independent journalist Aminah Ali noted that a representative from the school said they are "not responsible for what students do outside of the school day."

"This incident happened over spring break when school was not in session," the Parkway Central representative, Cathy Kelly, told Real STL News, "but if [an] issue outside of school causes [an] issue in school, students involved may suffer disciplinary actions."

Kelly added: "I hope that this can be a teachable moment for the girls involved as well as other students."

Parkway Central High School has at least one notable alumnus: Michael Avenatti, the disgraced former attorney for Trump mistress Stormy Daniels who was on Monday arrested for attempting to extort money from Nike.

You can watch the video below via Real STL News.