‘The radical left is not at peace with us’: Michelle Malkin declares ‘civil war is imminent’ in America 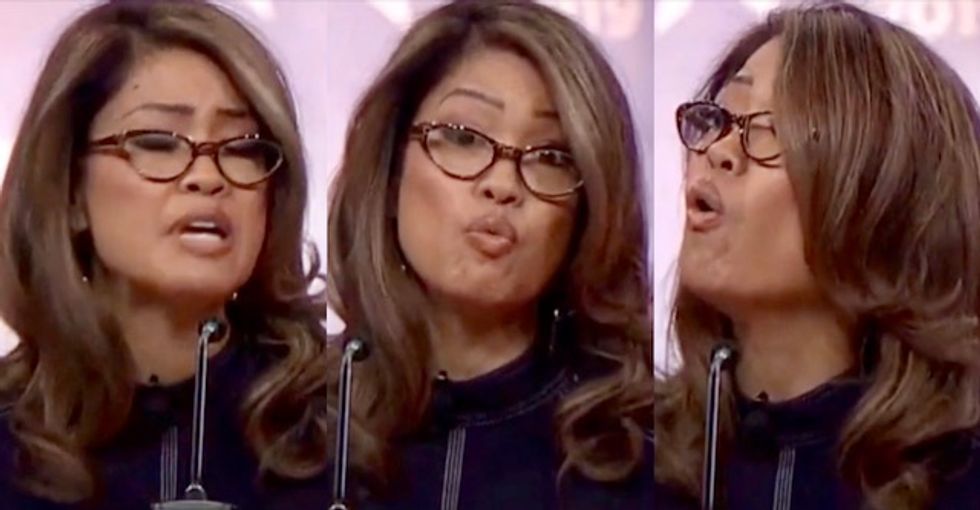 Far right wing pundit Michelle Malkin has seen her popularity subside in recent years but she still is considered a strong conservative voice as she expands her imprint into white nationalist publications and the alt-right.

“Our enemies are both foreign and domestic,” Malkin, stressing the word “domestic,” told attendees.

“Inside our already flimsily defended borders, we are not at peace. Or rather, the radical left is not at peace with us,” she intoned – as if conservatives are a ruling power.

“From the comfort of TV green rooms and Beltway backrooms and corporate boardrooms and conference ballrooms, it may not look like civil war is imminent, but threats and outright violence against you – ordinary, law-abiding people – are now regularized features, not just random bugs, in these Disunited States,” she fear-mongered to the room of conservatives.

Malkin has always had a flair for the dramatic, especially when she regularly attacked gay people during the early Obama years.

She's decried the "insane rage of the gay-marriage mob," and the "tolerance mob." She once said she "despaired" when she heard Chick-Fil-A would no longer support anti-gay hate groups (they still do.)

But Malkin has been relegated these days to being published in the white nationalist website VDARE, a hate group that is anti-immigrant and associates with white supremacists and the alt-right. And she's playing defense now, decrying the supposed victimization of Trump supporters.

"MAGA hat-wearers are being kicked off planes and assaulted in school hallways and restaurants," she said, continuing her CPAC speech to a room that was hardly packed.

"Conservative speakers are being mobbed and Molotov-cocktailed. ICE agents and their families are being targeted. Pro-lifers are being kicked and menaced. Pro-Trump anti-jihad moms on social media are being monitored and doxed. The madness is beyond parody,” she cried.

“Where are the sanctuary spaces for law-abiding conservatives who simply want to exercise their rights to free speech and peaceable assembly?” she asked, ironically, as if they don't have them already, like, for example, CPAC. “The divide in this county is between decent people who stand up for America and dastardly people who want to bring America to its knees.”