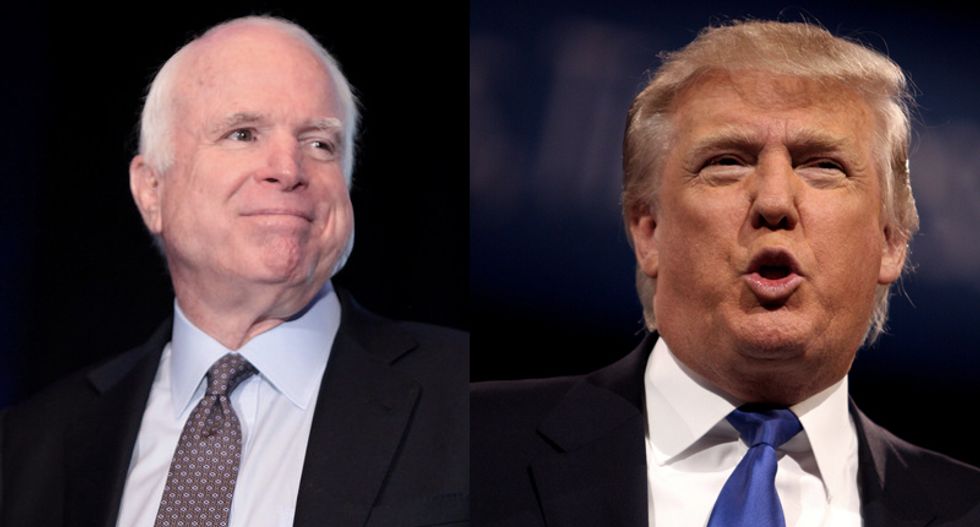 Rep. Chip Roy (R-TX) is a far-right Republican who led Sen. Ted Cruz's (R-TX) official office -- yet even he is sick of President Donald Trump's ongoing feud with Sen. John McCain (R-AZ), who has been dead for seven months.

"I disagree with the POTUS standing in front of M1A1 Abram tanks & the American flag and spending time trashing POW veteran and former US Senator McCain, and as Commander-in-Chief characterizing our time fighting in the Middle East as an unqualified disaster," said Roy during a late-night thread Thursday.

"I agree we should re-think our strategy [and] engagement there, but words matter to the heroes who have bled the ground red and accomplished much in the process," Roy continued. "I disagreed also with Senator McCain on too many issues to count – particularly immigration."

When it came to Trump's complaint about McCain's repeal of the Affordable Care Act, Roy said he would have voted against it too, but for different reasons. Trump has said that McCain campaigned on "repeal and replace," but critics say the bill was far from it. Roy called the bill McCain opposed a "fake Obamacare repeal bill," saying he fought against it at the time. Indeed, the bill also did not include a replacement to the healthcare legislation, which would have thrown 28.9 million people off of their health insurance.

"I have stood by the President and will continue to do so when it comes to policies that will secure the border, drain the swamp, restore fiscal sanity, and establish healthcare freedom," Roy continued. "But I see only harm and no benefit in looking backward."

Roy urged the president to stop bullying a deadman and focus on doing the work Americans elected him to do.

"Our border remains unsecure. Our debt mounts at $100 million per hour. Our healthcare remains too expensive and burdensome. Our military remains stretched thin and in need of clarity of mission. Let’s move on," Roy closed.