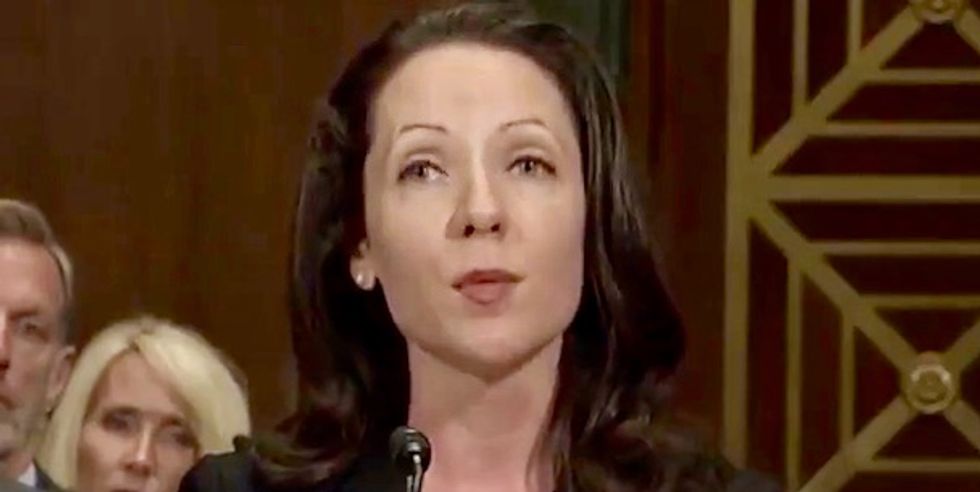 At 37-years old Allison Jones Rushing was just confirmed to become the youngest judge on the federal bench. A lifetime appointment, she will sit on the U.S. Court of Appeals for the Fourth Circuit, and based on her age she will be a federal judge for decades, as HuffPost just reported.

Rushing clerked for Supreme Court Justice Clarence Thomas and interned for the Alliance Defending Freedom (ADF), which is listed as an anti-LGBT hate group by the Southern Poverty Law Center. In case there's any question if her personal beliefs align with the ADF's, she has said she believes there are "moral and practical" reasons for not just opposing marriage equality, but for banning the marriages of same-sex couples.

Senate Republicans on Tuesday pushed through her confirmation, voting 53-44. Every Republican voted for her. Every Democrat voted against her, as Huffpost's Jennifer Bendery noted.

“She has practiced law for nine years. How many cases has she tried to verdict or judgment? Four. Has she been the lead attorney on any of those cases? No,” said Senator Dick Durbin (D-IL), who serves as the Ranking Member on the Judiciary Committee's Subcommittee on the Constitution. “That is the most scant, weakest legal resume imaginable for someone who’s seeking a lifetime appointment to the second-highest court of the land.”

Senator Durbin made his criticisms known on Monday when the Senate advanced her nomination.

The National Center for Transgender Equality's Gillian Branstetter wrote last year that"Rushing has built her short career on promoting homophobic and transphobic prejudice, siding with dogmatic ideologues over the rights of everyday citizens."

The Alliance Defending Freedom, Branstetter adds, "lead the fight to criminalize LGBTQ people’s existence in countries around the world. including efforts to forcibly sterilize transgender people. They defend the damaging and debunked practice of so-called conversion therapy, which is now banned in 15 states including the District of Columbia," and "stand by the horrific claim that being transgender is 'most often' a result of child abuse."

The ADF is the conservative Christian legal organization that's behind the rash of aggrieved anti-LGBT cake bakers and florists who have filed "religious liberty" and "right to discriminate" cases, several of which are making their way through the court system. The Supreme Court in a narrow ruling last year overturned the decision in the case of Colorado cake baker Jack Phillips. ADF has represented Phillips and florist Barronelle Stutzman.