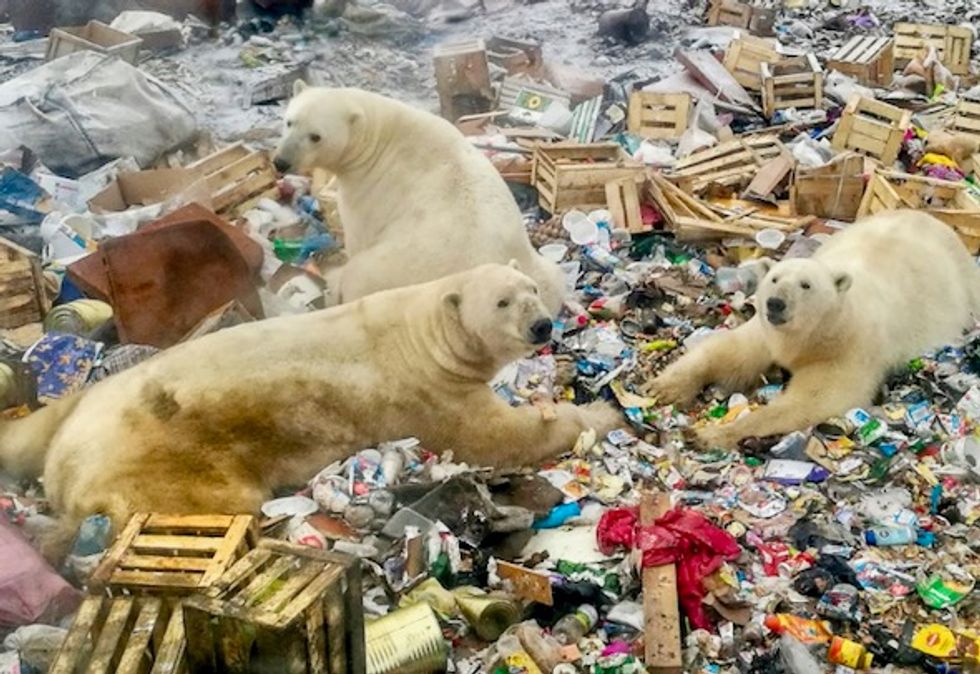 Polar bears feed at a garbage dump near the village of Belushya Guba, on the remote northern Russian archipelago of Novaya Zemlya on October 31, 2018

Last month's visit by roaming polar bears that put a Russian village on lockdown may be just the beginning.

For as Moscow steps up its activity in the warming Arctic, conflict with the rare species is likely to increase.

More than 50 bears approached Belyushya Guba, a village on the far northern Novaya Zemlya archipelago, in February. As many as 10 of them explored the streets and entered buildings.

Local authorities declared a state of emergency for a week and appealed for help from Moscow.

Photos of the incident went viral, with some observers blaming officials for ignoring a sprawling garbage dump nearby where the animals feasted on food waste.

But polar bear experts say the main reason the Arctic predators came so close to humans was the late freezing of the sea. It was this that kept them from hunting seals and sent them looking for alternate food sources.

"Development in the Arctic will definitely increase conflict with humans, especially now that the polar bear is losing its life platform in several regions and coming ashore," said biologist Anatoly Kochnev, who has studied polar bears in the eastern Arctic since the 1980s.

Novaya Zemlya, an archipelago of two islands between the Kara and Barents seas, is a good example of Moscow's new frontier that falls inside the polar bear habitat.

Bears in the Barents Sea are seeing the fastest ice reduction of the species' range, having lost 20 weeks of ice a year over the last few decades, according to Polar Bears International.

"Ice monitoring shows that previously, ice near Belushya Guba formed in December," said Ilya Mordvintsev from the Severtsov Institute in Moscow, who was in a group of scientists flown out to aid the village.

"For thousands of years, they migrated this time of year to hunt seals. This year they came to the shore and there was no ice."

Since the incident, ice has formed and the bears have left land to hunt, he said. "But it's impossible to rule out a repeat of the situation in the coming years."

And as more humans come to Novaya Zemlya, the likelihood of human-bear conflict increases.

A Soviet-era nuclear weapons testing site, Novaya Zemlya remains a restricted territory. But following a post-Soviet hiatus, the military has put up new buildings and an aerodrome.

A new port is under construction, in tandem with imminent plans to mine the giant Pavlovskoye lead and zinc deposit.

New contingents of military police were deployed to Belushya Guba in 2018. The community, which has schools and a large sports complex for military families, numbers over 2,000 people.

In 1991, soldiers drove an axe into the head of a polar bear after it had got used to feeding on discarded scraps and become aggressive. Biologists from the island's nature reserve never found the injured animal, he said.

"When they left a year later, we were relieved. Only reserve staff remained, who knew how to behave around bears," he said. "But now it's all starting again."

AFP/File / Alexander GRIR Novaya Zemlya, an archipelago of two islands between the Kara and Barents seas, is a good example of Moscow's new frontier that falls inside the polar bear habitat

Moscow announced in 2014 that the Arctic was a strategic priority for its military.

Kochnev in 2015 wrote an emotional blog post after a bear near a military construction site on Wrangel island swallowed an explosive flare. He criticised the new base, and was fired from his job in a national park as a result.

Current instructions regarding polar bears focus on how to ward them off, he said. But the priority should be fortifying facilities to prevent any contact.

"Put yourself inside a cage and let the bears roam around," he said in advice to Arctic developers.

Mordvintsev, however, said this would not work on Novaya Zemlya, where winds would turn any fence into a giant snowdrift for bears to walk over.

Belushya Guba is planning to install cameras and address its waste problem, he said. Already all arrivals to the local airport listen to a mandatory lecture on polar bear behaviour.

Moscow's plans to develop the Northern Passage also pose a problem for polar bears in the region, he said.

NTB SCANPIX/AFP / TORE MEEK One expert believes that if the ice-free period increases, polars will likely migrat to northern Canada, and those who stay will eventually be killed off

"Constant use of icebreakers through ice where seals give birth affects populations of seals" which bears feed on.

Putin last year ordered an increase in the capacity of the Northern Passage, touted as an alternate trade route to Asia, from the current 18 million tonnes to 80 million tonnes by 2024.

Kochnev said bears have been able to adapt so far to unfavourable trends, learning to feed in groups rather than hunt in solitude. But if warming continues, "polar bears will simply leave Russia".

"If the ice-free period increases by another two-three weeks, they will likely migrate to northern Canada, where changes have been less noticeable," he said.

The ones that stay behind on Russian soil, meanwhile, will eventually get killed off in conflicts with humans.