Sarah Sanders ridiculed for declaring Trump ‘the most pro-Israel president' ever: ‘Yet he still can’t find it on a map’ 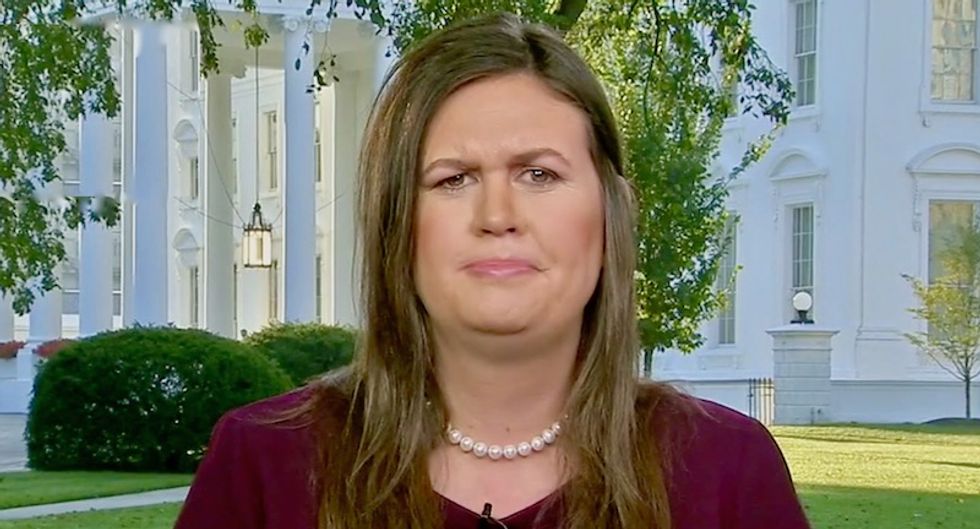 The priorities of President Donald Trump were called into question on Thursday after White House press secretary made a bold boast about the president's support for Israel.

"President @realDonaldTrump is the most pro-Israel President our country has ever had," Sarah Huckabee Sanders argued.

Here are some of the responses:

President @realDonaldTrump is the most pro-himself President our country has ever had. https://t.co/7k5imsv6tu
— Rogue Betty (@Rogue Betty) 1553214667.0

Natalia Contreras, Votebeat And The Texas Tribune
A defamation and computer fraud lawsuit filed this week against Texas-based True the Vote asks a judge to essentially determine whether the election-integrity group’s campaign against a small election vendor constitutes slanderous lies or a participation in criminal acts.

The suit was brought by Konnech Inc., a small elections logistics company based in Michigan. It alleges that True the Vote and its followers launched a stream of false and racist accusations against the company’s founder, forcing him and his family to flee their home in fear for their lives and damaging the company’s business. The suit cites True the Votes’ public claims that it hacked the company’s servers and accessed the personal information of nearly 2 million U.S. poll workers.

In a rare move, the judge granted Konnech’s request for a temporary restraining order against Catherine Engelbrecht and Gregg Phillips, leaders of True the Vote, a nonprofit organization known for making allegations of voter fraud without evidence to support their claims. Judge Kenneth Hoyt of the U.S. District Court for the Southern District of Texas found a “substantial likelihood” that Konnech would “suffer irreparable injury” without it. The order also prohibits True the Vote from accessing, or attempting to access, Konnech’s computers or disclosing any of the company’s data and orders the group to disclose more information about the alleged breach.

Narcissistic presidents get us into longer wars — according to science

Although Donald Trump's soon-to-be impeachment attorney Alan Dershowitz sad in 2019 that the then-president would never refuse to step down after losing an election, psychologists and other mental health experts who spoke to Salon prior to the 2020 election repeatedly made the opposite prediction. Because Trump displays a large number of narcissistic traits, they foresaw that he would react to a loss as if it were "psychic death, as psychologist Bandy X. Lee said at the time.

As we all know now, the mental health experts were right.

The far-right conspiracy theory that believes the world is run by a secret cabal of Satanic pedophiles is drawing attention to a 2013 episode of "The Simpsons" television show.

Vice News reports it started with an online clip of German lawmaker Friedrich Merz talking about Russia's invasion of Ukraine.