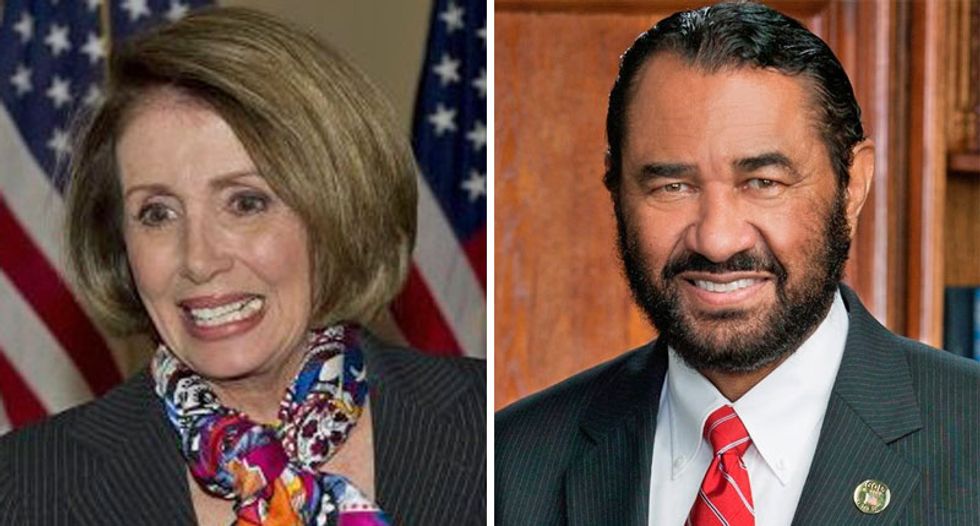 A day after U.S. House Speaker Nancy Pelosi sent a clear message to her Democratic caucus that she would not support the impeachment of President Donald Trump., U.S. Rep. Al Green responded with a message of his own: another impeachment vote is coming to the House floor anyway.

At issue is a long-sought after cause for the Houston Democrat that, for more than a year, has isolated him from the party's leadership, which has advocated for holding off on the issue. Pelosi appeared to cut the debate off even further in an interview with The Washington Post Magazine published online Monday.

"I’m not for impeachment," Pelosi said. "I’ve been thinking about this: Impeachment is so divisive to the country that unless there’s something so compelling and overwhelming and bipartisan, I don’t think we should go down that path, because it divides the country. And he’s just not worth it."

Green responded in kind over social media, on television and in a news conference in the subsequent hours with his own message: He will keep at it and he delivered the message with indirect shots at his speaker.

"This is a sad set of circumstances when we conclude 'it's not worth it' to impeach a bigoted president who is causing harm to a society," Green said on C-SPAN Tuesday morning.

Green cited bigotry and a slew of offensive comments and controversial policy choices Trump has made over his first two years in office as his primary reason to impeach the president. But he also pointed to potential obstruction of justice, including referencing Trump's firing of now-former FBI Director James Comey.

"I won't address Speaker Pelosi, but here's what I will address: There are opinion-makers and opinion-shapers who want to maintain the status quo," Green said in the interview. "For them, bigotry is a talking point, not an action item. It's an action item for me."

Green put impeachment on the floor in late 2017, when Republicans held the majority. Green saw his motion soundly defeated by a 364-58 margin.

Green said in the interview he has done little to whip the vote. He does not sit on the committee where impeachment is addressed, the U.S. House Judiciary Committee. And he openly admitted there was no concerted organization behind his impeachment push.

"We have to get beyond talking points and have bigotry as an action item," he said. "And the one way it will be an action item in the Congress of the United States of America is to have a vote. We will all go on record. Everybody do what you may. I don't believe we should lobby people and whip people as we caption it in Congress, I think people should vote their convictions. History will be there to judge us all."

Advocates for Trump's removal from office would need the support of 20 Republican senators – a near impossible sum at this political moment.

There is near -uniform revulsion with Trump among Texas Democrats and the larger caucus. But the Green impeachment push is viewed as potentially playing into Trump's hands ahead of the 2020 elections, helping to shore up his base while putting vulnerable Democratic members up for re-election, like freshmen U.S. Reps. Colin Allred of Dallas and Lizzie Pannill Fletcher of Houston, in the position of defending an unpopular measure in their home districts.

For now, though, some House Democratic insiders say they view Green's impeachment push as recurrent distraction. Some sources within House Democratic leadership on Tuesday morning shrugged off Green's rhetoric, suggesting that there is little new from either his remarks or from those of the speaker.

There are still House Democratic members who were in office back in 1998 who recall watching President Bill Clinton's political support rise after House Republicans impeached him – only to see him acquitted in a trial in the U.S. Senate. The fear among many in the current Democratic caucus is that impeachment without bipartisan support will similarly strengthen Trump ahead of his re-election.

Green scoffed at concerns about a lack of bipartisan support.

"Bigotry is on the rise, and it will not subside by allowing Republicans to determine the actions of Democrats," he said."There will be another vote on it," he said. "I'm going to bring it to the floor of the House again. I know I'm the only person that's done it."