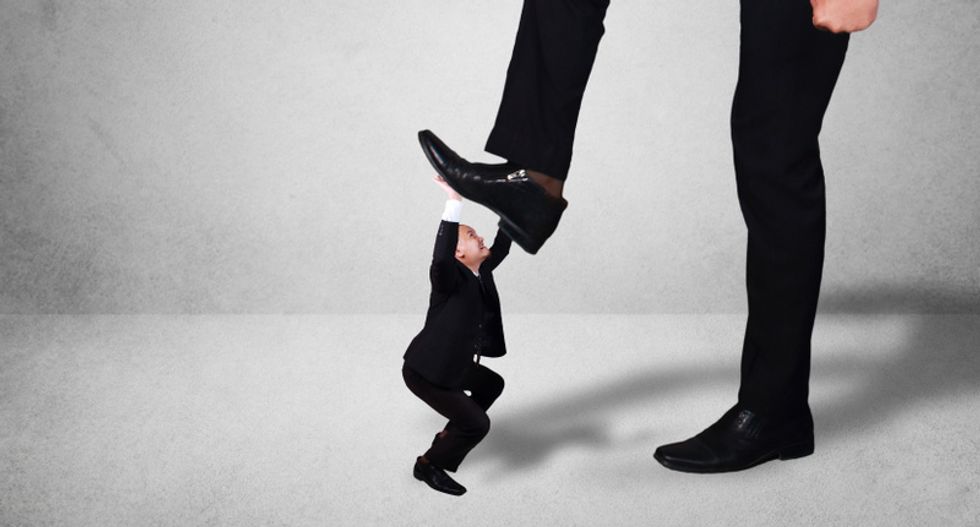 Boss stepping on his employee. (Shutterstock)

As I travel around the country, I tell people: if you have a job, join a union. And if you don’t have a union, start one.

You see, it all comes down to the balance of power between business and workers.

You strengthen the middle class by strengthening unions.

In the mid-1950s, unions were strong, and wages grew in tandem with the economy. Nearly one third of all workers in the United States were unionized.

This gave workers across America – even those who weren’t unionized – significant power to demand and get better wages, hours, benefits, and working conditions.

Yet starting in the 1980s and with increasing ferocity since then, private-sector employers have fought against unions.

In short, anti-worker corporations and politicians joined together to stop workers from joining together.

The two trends are the exact mirror images of each other.

The wealthy and big corporations continued to take home a larger share of the nation’s wealth, while workers were left behind.  Unions balance the power of workers with corporations, by allowing workers to join forces to get a fair share.

As an individual your voice is limited, but there is power in numbers.  Today, unions are more important than ever to the survival of the middle class.

Corporations have tremendous power over our lives.

They dictate everything from bathroom breaks to health care for millions of Americans.

In the halls of Washington and state legislatures, their political power has allowed them to block increases in the minimum wage, roll back workplace protections, and deny workers their benefits.

Unless workers balance the power of big corporations, the middle class will continue to get a smaller piece of the pie as more and more wealth goes to those at the top.

Unions are also essential to the workplace of the future.

Workers must contend with the forces of globalization and technological change. With the stroke of a keyboard, executives can send jobs overseas.

Automated technologies threaten to replace workers in every sector of the economy, making jobs less and less secure. Without unions, workers will be completely at the mercy of these trends.

But this isn’t just a theoretical argument.

The tangible, real-world examples of how unions make workers’ lives better are everywhere you look.

Hospitality workers were able to secure raises and job protections from Marriott, the world’s largest hotel chain, because of the power of their union.

Disney employees secured a $15 an hour base-pay after years of opposition from management.

We must continue to expand unions to restore balance to our economy.

In 2017, more than 250,000 additional American workers joined unions, and research shows almost 60 million more workers would like to join–if they had the opportunity.

Public approval of labor unions is at 62 percent, a 15-year high.

That’s why powerful corporations and their enablers in government are trying to squash workers by pushing so-called “right to work” laws and undermining health care, workplace safety, and retirement protections.