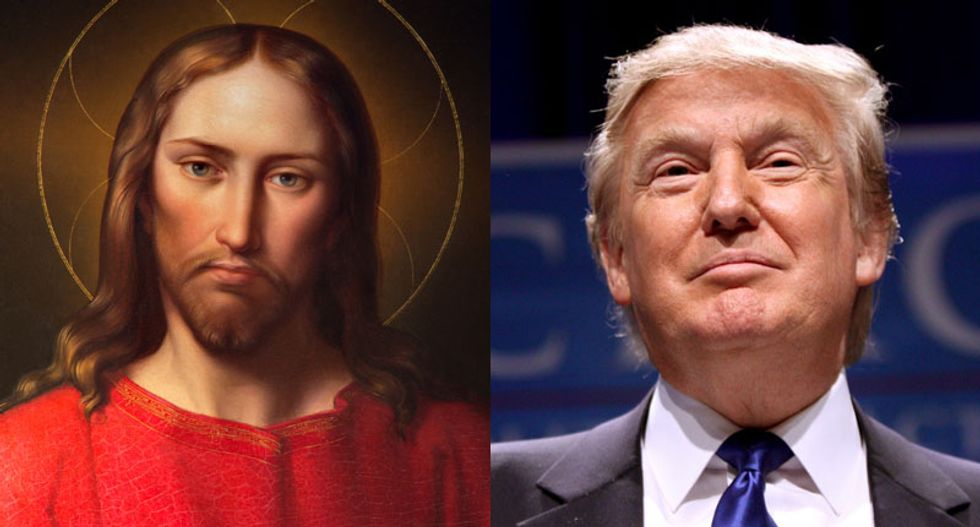 Jesus was a socialist. Much to the chagrin of contemporary Evangelicals and members of the far-right, the leader of their church who continues to save souls daily, stands on an altar of outright socialism. Meanwhile, President Donald Trump is fighting against the very ideas Jesus stood for.

An extensive column by Chuck McKnight for Patheos lists out scripture after scripture that demonstrates that the shibboleth of the Lord upholds that is in direct conflict with Republican heretics.

McKnight cited the Book of Acts, which calls for followers of Christ to redistribute the wealth.

"All who believed were together and had all things in common; they would sell their possessions and goods and distribute the proceeds to all, as any had need. … Now the whole group of those who believed were of one heart and soul, and no one claimed private ownership of any possessions, but everything they owned was held in common. … There was not a needy person among them, for as many as owned lands or houses sold them and brought the proceeds of what was sold. They laid it at the apostles’ feet, and it was distributed to each as any had need. (Acts 2:44–45; 4:32, 34–35; NRSV)

That comes in conflict with capitalism, but even in a capitalist society, some measures can be taken to adhere to God's law of social goodness and care for His people. McKnight explained that some could argue the Book of Acts comes just shy of ordering Christians to follow the example outlined in the book. For some, that makes it an "open-and-shut case," he said.

"They happily dismiss socialism and move on. However, the more curious might not be content to leave it there," he wrote. "We might venture to ask: Why did the early church act in this manner to begin with? Where did they come up with these radical ideas?"

Because Jesus was a socialist.

“The Spirit of the Lord is upon me,

because he has anointed me

to bring good news to the poor.

He has sent me to proclaim release to the captives

and recovery of sight to the blind,

to let the oppressed go free,

McKnight explained that the "year of the Lord's favor" is likely referring to the Year of Jubilee described in Leviticus 25. Every 50 years all debts are forgiven and all property that was sold can be reclaimed. Today, more than 100,000 former students are still waiting to hear whether their loan debt will be canceled if they were swindled by a predatory lending scam or a for-profit college.

One of the most notorious was Trump University, which bilked it's students out of thousands each, never to deliver on their promises. The president was forced to pay $25 million settlement he would likely have fought if he hadn't been elected to the White House.

“He has brought down the powerful from their thrones,

and lifted up the lowly;

he has filled the hungry with good things,

One only need look at the Republican tax cut of 2017 to see the way it lifted the rich while stomping on the rest of America. In the end, even President Donald Trump's advisors admitted it didn't work to spur growth.

“Blessed are you who are poor,

for yours is the kingdom of God.

Blessed are you who are hungry now,

for you will be filled. …

“But woe to you who are rich,

for you have received your consolation.

Woe to you who are full now,

In February, Trump’s budget director, Mick Mulvaney, released the president’s proposed federal budget proposal. Altogether, Trump's proposal would cut about $1 trillion from Social Security and Medicare, at a time that the Baby Boomers are about to dominate the retirement community. Some of that comes from Trump's decision to gut Obamacare, but even without the Obamacare cuts, Trump wants to cut hundreds of billions of dollars that seniors need.

"At its most basic level, the kingdom of God means justice—for the poor, the marginalized, the oppressed, the outcast—and such justice demands that the rich and the powerful be brought low enough that everyone else can have enough," wrote McKnight.

He noted that Jesus said that the kingdom is in our midst (Luke 17:21), but also called it a mustard seed—starting small but growing ever greater (Matt. 13:31). He taught his disciples to pray, “Your kingdom come,” which means “Your will be done, on earth as it is in heaven” (Matt. 6:10).

"And yet the kingdom is not something we can simply pray about and then wait for God to accomplish. We’re meant to partner with God to bring about these kingdom purposes," McKnight said, before quoting Romans 8:28, REB.

Trump has never been a paragon of goodness or virtue, despite claims that the Bible is his favorite book.

In some copies of the good book, the words of Christ appear in red so as to stand out from the rest of the descriptions and commentary from the saints. Perhaps if he read the Bible, particularly the red text, he might learn a few things. Until then, it seems, he is intent on campaigning against socialism and advocating cuts to social programs at the same time.