Trump doesn't have a functioning White House -- and it's Jared and Ivanka's fault: MSNBC's Nicolle Wallace 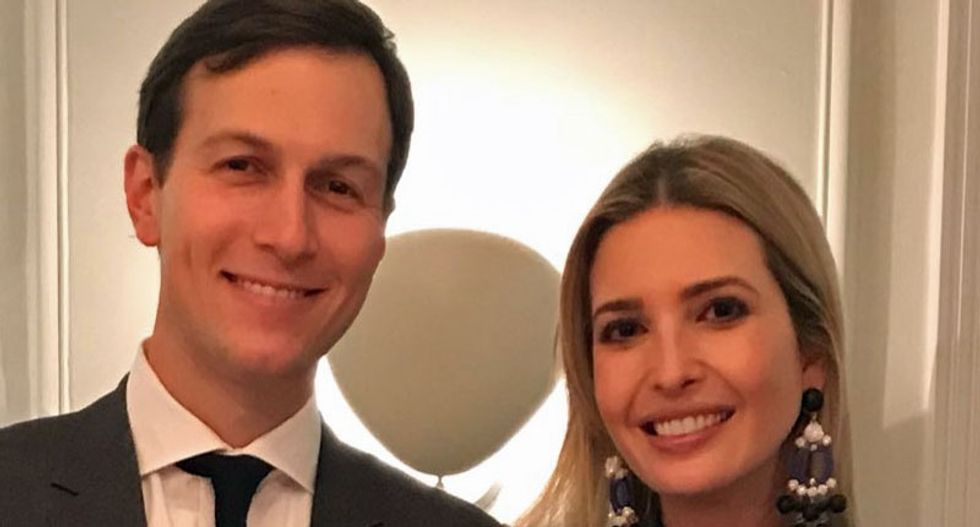 The panel on MSNBC's "Deadline: White House" with Nicolle Wallace on Tuesday explained how Jared Kushner and Ivanka Trump are harming Donald Trump's White House -- but can't leave because Trump's kids financially rely on him.

The host introduced the new book, Kushner, Inc. by journalist Vicky Ward, which paints a devastating portrait of Jared and Ivanka, who are both senior White House advisors despite lacking any government experience.

"I think it's about time that somebody pick a part this narrative that they've been so successful at putting out themselves out there, but have no evidence to support it, which is they are a moderating voice on this president or this White House," she explained. "We know that's not true."

"I think there's something more sinister underneath it for me, which is just the notion that all the ugliness of the president as a human being -- and what he's done to the institution of the presidency -- that that could somehow be softened in some way," she continued. "The images of children in cages, that that could be softened by this beautiful young couple who are going to be these voices of reason."

"I think, because that isn't the truth behind it, it's one of most damaging public relations campaign of our time," Gay concluded.

"The truth is...that Jared and Ivanka are the single, largest repellent of talent inside this West Wing," Wallace reported. "The reason they can't recruit a real chief of staff is because Jared and Ivanka run the West Wing."

"Jared and Ivanka versus whomever, Javanka always wins," Wallace noted, referring to the portmanteau of the couple's names.

MSNBC analyst Donny Deutsch said there's a financial motivation that prevents Ivanka or Donald Trump, Jr. from being a moderating factor on their father.

"I interviewed the Trump kids and there was one thing that stood out, the dynamic between the father and the kids. There's love but it's employee/employer love," Deutsch reported. "They can get fired...it's the same way you have this tremendous affection for a boss, that is affection, but it's that dynamic."

"These kids are not independently wealthy. There are ways that the very wealthy set up trusts, by the time they are 35 and 40 they can almost already say screw you dad or mom if they want. Donald Trump is not set up that way."