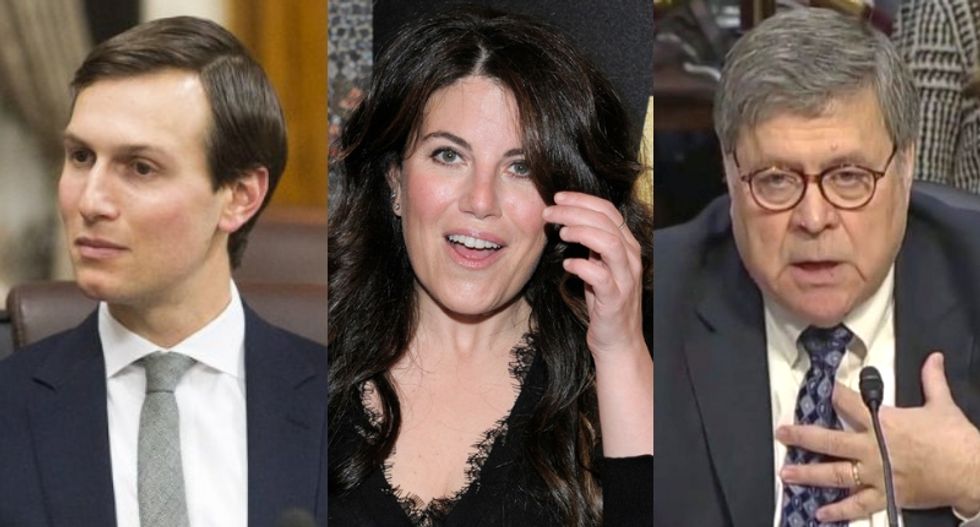 A pro-Trump Christian conspiracy theorist has cooked up one of its wildest claims yet: that the president's son-in-law Jared Kushner, Clinton intern Monica Lewinsky and Attorney General Bill Barr are all operatives of Israel's Mossad spy agency.

The Daily Beast reported Friday that the ironically-named TruNews website run by conservative radio host Rick Wiles claimed the pedophilia and sex trafficking accusations against Trump-linked billionaire Jeffrey Epstein are part of a Mossad operation to bring him down.

According to Wiles, the late British publisher Robert Maxwell and his daughter Ghislaine (Epstein's ex named in a lawsuit as his co-conspirator) were actually Mossad agents.

The TruNews pundit then claimed that a photo shown to Jeb Bush at George H.W. Bush's funeral made him "almost pass out."

"I don't know what was in that photograph but I would guess that the Israeli Mossad provided President Trump with an extremely damaging, compromising photograph of George Herbert Walker Bush, enough to make his son almost pass out," Wiles said.

"That brings us back to Jared Kushner," he added. "Just a good Jewish boy, working in his father-in-law's White House, on behalf of his masters in Tel Aviv and Jerusalem."

Wiles claimed that his incoherent scheme "looks like a Jewish mafia operation" and that "Ghislaine is the connection to Mossad."

Later, he said "the [independent counsel Ken] Starr investigation of Bill Clinton was a hoax" and that "Monica Lewinsky was, most likely, the Mossad agent in the White House."

You can watch Wiles unfold his bizarre conspiracy below: