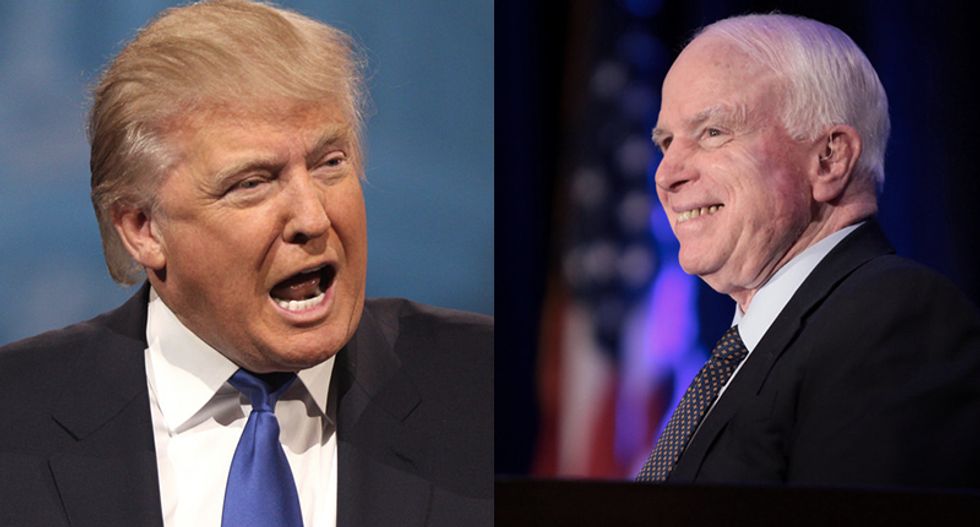 President Donald Trump appears to have given himself a diagnosis of John McCain-Tourettes Syndrome -- and a Fox News panelist agrees.

During a Thursday panel discussion on "Your World With Neil Cavuto," the group viewed a recent interview with Trump and Maria Bartiromo, who asked about the ongoing feud with the late senator.

"You spend a good portion of your time trashing John McCain. Senator John McCain is dead. Why are you doing this?" she asked.

Trump defended it by saying that he doesn't spend "a good portion," rather "it's a very small portion.

"If you realize, about three days ago, it came out that he gave to the FBI the fake news dossier," Trump said, explaining why it wasn't his fault. "It was a fake, a fraud and paid for by Hillary Clinton. They gave to it John McCain who gave it to the FBI for evil purposes. That's not good. The other thing, he voted against repeal and replace. He's been campaigning for years for repeal and replace. I'm not a fan. After all of this time, he's -- think of this. Repeal and replace. We would have had great healthcare."

As a fact-check, the repeal of the Affordable Care Act was only a "light" repeal, and there was no replacement, which could be why McCain refused to support it.

Bartiromo said that McCain can't punch back, to which Trump said, "I don't talk about it. You brought it up."

"Just for the record, the president brought it up in Ohio on his own," Fox News's Cavuto said. "Nobody asked for it. He brought it up."

Pollster Lee Carter said that Trump has no business bringing it up.

"There's no real problem or retribution that he has. His base stays loyal. People defend him. When people go crazy, how can he do this, everybody digs in their heels and gets more protective of the president," she said. "He gets away with it, and he needs to move on. This is one of those things the base accepts because of his policies and forgives the personality quirk. I would say, this is more than a personality quirk, this is a deficit, but he gets away with it."

The host agreed but noted that these things get in the way of talking about the economy.

"Valid reason," Carter said. "There's a reason that we want presidents to act a certain way."