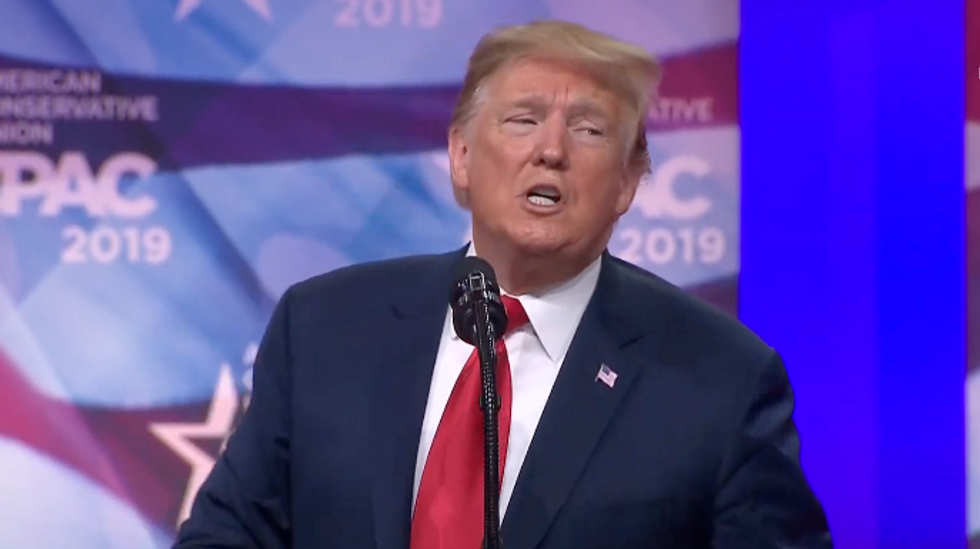 President Donald Trump speaks during the 2019 CPAC. Image via screengrab.

During his speech at the 2019 Conservative Political Action Conference, President Donald Trump used the term "bullsh*t" to describe investigations into his alleged corruption.

After deriding "Little Schifty" Adam Schiff, the Democratic chairman of the House Intelligence Committee, Trump took aim at the House Democrats investigating him.

"We had people that lost, and unfortunately you put the wrong people in a couple of positions, and they leave people for a long time that should not be there," the president told the CPAC crowd. "All of a sudden, they are trying to take you out with bullsh*t, ok? With bullsh*t"

"Now, Robert Mueller never received a vote, and neither did the person that appointed him," Trump said.

Affecting a fake Southern accent, the president imitated Sessions, saying "I am going to recuse myself."

"Why the hell did he not tell me that before I put him in?" Trump said. "How do you recuse yourself? But the person who appointed Robert Mueller never received a vote."

As journalists Nick Gillespie and Matt Lewis noted on Twitter, the "bullsh*t" moment was far from the only time the president used expletives during the speech.