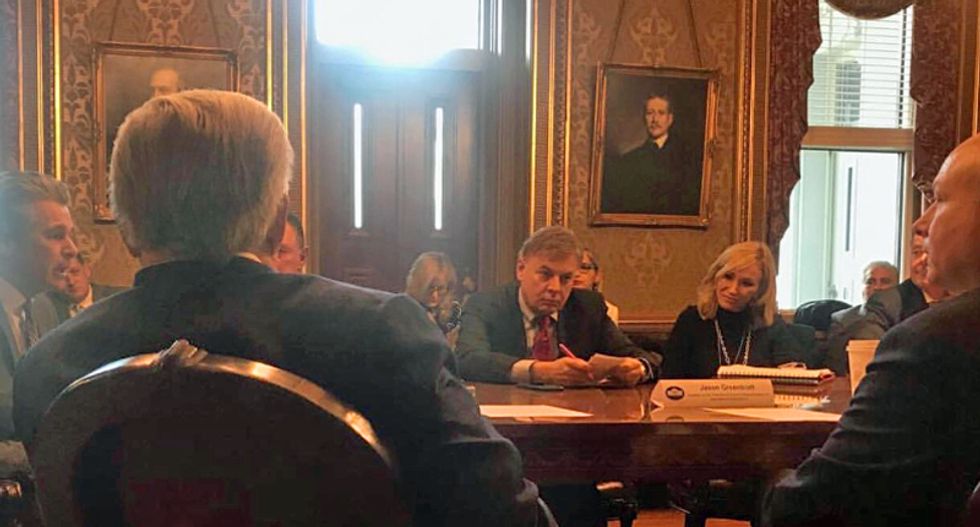 Photo posted on Twitter by Jentezen Franklin of a White House meeting with Evangelical leaders.

The plan has been panned by Palestinian, who are anticipating a proposal they cannot support, because of Kushner's close friendship with Netanyahu.

But instead of working to reassure the Palestinians about the plan, Donald Trump's administration is instead worried about his Evangelical base.

"A source who attended the meeting said that several of the Evangelical leaders raised concerns about the peace plan, especially about the possibility it will give the Palestinians a capital in parts of East Jerusalem," Axios reported.

Joel Rosenberg reportedly attended the meeting and retweeted the Axios account of what transpired.

"Rosenberg, who is also a personal friend of Pence and Pompeo, says he told the other Evangelical leaders in the meetings that Palestinian President Abbas is never going to make a deal, so there is no need to be too worried that Jerusalem is going to be sacrificed," Axios reported.

"We need to allow the President freedom of movement and latitude to present a plan that would allow those Arab states which are more willing than ever to make peace with Israel to move forward. We need to give the Arab States the ability to support this. If the Saudis, the Egyptian and others can say that this plan is credible it will open the door for, after the Palestinians say no, to talk about how to move forward with Israel," Rosenberg reportedly said.

Indeed, support from the Palestinians did not seem important to the White House. Greenblatt, the U.S. envoy and former Trump Organization real estate lawyer, repeatedly slammed the Palestinian Authority following the meeting.

"One by one, the Trump administration has piled humiliations on the Palestinians," Foreign Policy magazine reported in February. "It was at Kushner’s urging, according to sources, that Trump announced he was moving the U.S. Embassy from Tel Aviv to Jerusalem, thus in one blow deciding an issue that a previous generation of American negotiators had delicately left to final talks. Kushner also pushed for ending the formal U.S. relationship with the Palestine Liberation Organization (PLO), denying a 'right of return' for Palestinians to Israel, and defunding Palestinian refugees."

The magazine noted Kushner's "main goal appears to be breaking the hopes of Palestinians for anything resembling a fully sovereign state of their own and to force them to settle for economic benefits, according to Middle East experts who have been consulted on the Kushner approach or studied it."

"So far, however, Kushner’s efforts have led only to Palestinian outrage and his own embarrassment, especially after the Arab ally he was most successful in cultivating in his efforts to gain recognition of Israel, Saudi Crown Prince Mohammed bin Salman, was implicated in the murder of a Washington Post journalist and became an international pariah. The Palestinian response has been to refuse to engage with Washington at all," Foreign Policy reported.

Israel and the Jewish people need our prayers and our advocacy like never before. The Bible commmands, 'For Zion's… https://t.co/3UVN5rLHie
— Pastor John Hagee (@Pastor John Hagee) 1552098183.0