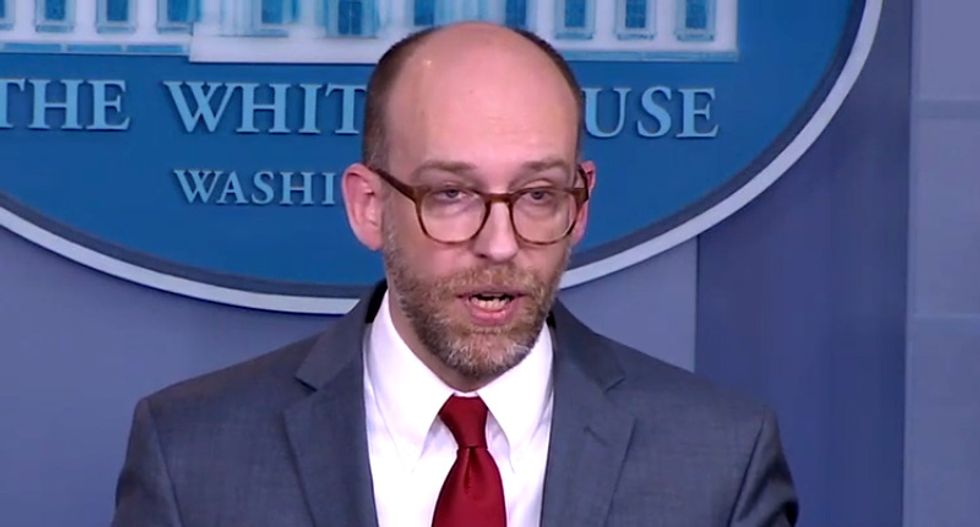 When White House Press Secretary Sarah Sanders took to the podium for the first time in over a month on Monday, she opened, unsurprisingly, with a lie: that President Donald Trump’s new budget keeps his promises.

Of course, it doesn’t, and it can’t — in part because Trump’s budgetary promises were basically contradictory.

So when Russell Vought, the acting director of the Office of Budget and Management, was pressed on one of these lies, he had to fall back on a common Republican deflection strategy: blame President Barack Obama.

One reporter noted that the president had promised to “eliminate the national debt in eight years.”

“The president has added historically large numbers to the national debt instead of keeping a promise to pay it off?” the reporter asked.

“The last administration nearly doubled the national debt,” Vought responded — failing to note that Obama took office in the midst of a financial crisis of historic proportions, while Trump entered the White House in a time of relative economic strength. He also failed to note that when Trump made his promise, the prior administration’s impact on the budget was already clear — so it wasn’t some surprise the current White House had to react to.

“When this president ran for office, he made a commitment to the American people that he would attempt to tackle the debt with eight years,” Vought continued. “This president did that the very first year he came into office by sending forth a budget that balanced within ten years and had more spending reductions than any in history.”

Of course, this just flatly admits that Trump didn’t live up to his promise. Trump didn’t promise to “attempt” to pay off the debt, he promised to do it. He promised to pay it down in eight years, not merely “tackle” it in ten. Vought’s reference to “balancing” the budget, anyway, would mean eliminating the yearly deficits, not the debt, which is the aggregation of each year’s deficits. And crafting a budget is essentially meaningless anyway if you can’t work with the other branches of government to actually enact the measures that would achieve your promises.

The basic problem is that Trump is a fraud who made absurd promises, and now his lackeys have to bend of backward to try to defend them. And apparently, the best idea they got is to blame Obama.