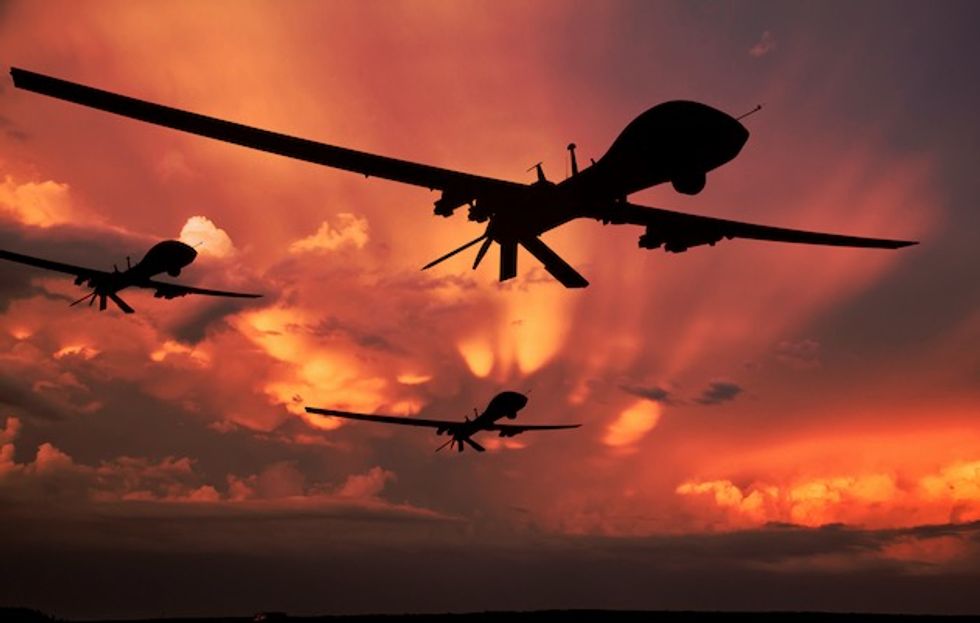 When it comes to drones and warfare, the U.S. seems to have forgotten some valuable historical lessons.

On March 6, President Trump signed an executive order that revoked the requirement, formulated under the Obama administration, that U.S. intelligence officials must publicly report the number of civilians killed in CIA drone strikes outside declared war zones.

In this decision, Trump is bringing the U.S. back to where it once was: the state of non-transparency that defined Obama’s first term.

As a researcher who has studied the ethics of war and written extensively on drones, I recognize that the U.S. has returned to a time when the CIA drone program was not governed by ethics, but shrouded in mystery, a time when it discounted the importance of civilian casualties.

One of the U.S. founding fathers understood the importance of civilian casualties.

In 1782, Benjamin Franklin, then U.S. ambassador to France, circulated a copy of a Boston newspaper with an article that detailed British atrocities against American civilians in the ongoing Revolutionary War. Franklin intended to have the article reprinted by British newspapers, which would get the story out to the British public and turn popular opinion against the government in power.

The catch: The story was completely fabricated. Franklin made it up based on anecdotes he had heard, counting on the supposition that the British public had little access to actual statistics on civilian casualties to ascertain its truth.

Recounted with pride today on the CIA’s website, Franklin’s antics touched off a public uproar in 18th-century Britain. The article was used by opposition Whig politicians to challenge continued British participation in the war.

This quaint historical anecdote reveals valuable moral lessons for today. On the one hand, it shows how civilian casualties are a tool of propaganda. On the other, it shows the role that the suffering of enemy civilians plays in establishing an eventual peace.

During Obama’s first term, there were hundreds of strikes in the tribal regions of Pakistan that the U.S. did not publicly acknowledge, with wildly divergent reports of civilian casualties.

During Obama’s tenure, there was warranted backlash from the international human rights community and congressional hearings at home. In the security realm, enemies of the U.S. such as al-Qaida and the Taliban used exaggerated reports of civilian deaths as propaganda to recruit new members.

In discussions about how to end what some experts were calling the forever war, a more disciplined and restrained use of drones was seen as part of the solution.

This opposition led to Obama’s ethical turn, defending drones by way of the just war doctrine. This centuries-old body of thought addresses the rights and wrongs of warfare: when a state can go to war and what it can do in war.

When it came to drones, Obama was swayed by the principle of noncombatant immunity: the moral necessity of sparing civilians from the horrors of war whenever possible. He limited drone strikes to scenarios with near certainty that there would be no civilian casualties.

Obama also decided to provide greater transparency to the American public by reporting civilian casualties. This had a strategic purpose. According to one expert who served under Obama, former intelligence officer Ned Price, reporting allowed the U.S. to “counter with facts and figures the misinformation and disinformation that terrorist groups and others issued to undermine our counter-terrorism operations around the globe.”

Obama’s ethical turn was a step forward. It emerged from his moral reckoning with the act of killing and the tragedy of civilians getting caught in the crossfire.

The Trump administration’s reversal on reporting civilian casualties is a step backward. It says a lot about the value – or lack thereof – placed on the lives of those living under drones. Trump’s executive order insulates the U.S. public from the tragedy of civilian deaths. Removing civilian deaths from the public view dehumanizes them, and in the process, eliminates the common threads of humanity that make peace possible.

Without public accountability, I worry that the Trump administration is paving the way for a more robust use of drones. Perhaps it will be similar to or even more permissive than Obama’s policy during his first term, when the U.S. carried out signature strikes, which targeted unidentified militants based on their behavior patterns and personal networks rather than the threat they posed. Trump has already taken steps to remove targeting constraints that had been codified under Obama.

Does discounting civilian casualties make the U.S. more secure in the long run? It’s an open question. The White House called the requirement “superfluous” and claimed that it distracts “intelligence professionals from their primary mission,” which is presumably protecting American security interests.

Despite the White House claims to the contrary, research shows that such reporting is important for preventing civilian casualties. A lack of transparency leads to the disproportionate use of drones. Such a policy risks causing more civilian casualties, and has the potential to make more enemies than friends, diminish cooperation with allies in the global struggle against terrorist groups, and put the drone controversy back in the news in a negative way.

Looking back and moving forward

More poignantly, Franklin abhorred the ease with which men kill and gloat about it. “Men,” he wrote later in 1782, “I find to be a Sort of Being very badly constructed, as they are generally more easily provok’d than reconcil’d, more disposed to do Mischief to each other than to make Reparation … without a Blush they assemble in great armies at NoonDay to destroy, and when they have kill’d as many as they can, they exaggerate the Number to augment the fancied Glory.”

Amidst this exaggerated killing, Franklin saw a common connection shared between enemies: the suffering of civilians. This made, in his mind, peace between enemies a genuine possibility.

With Trump’s executive order, the American public risks being lulled into ignorance about the plight of civilians living under drones, and does so at the peril of perpetual war with future enemies of America’s own making.