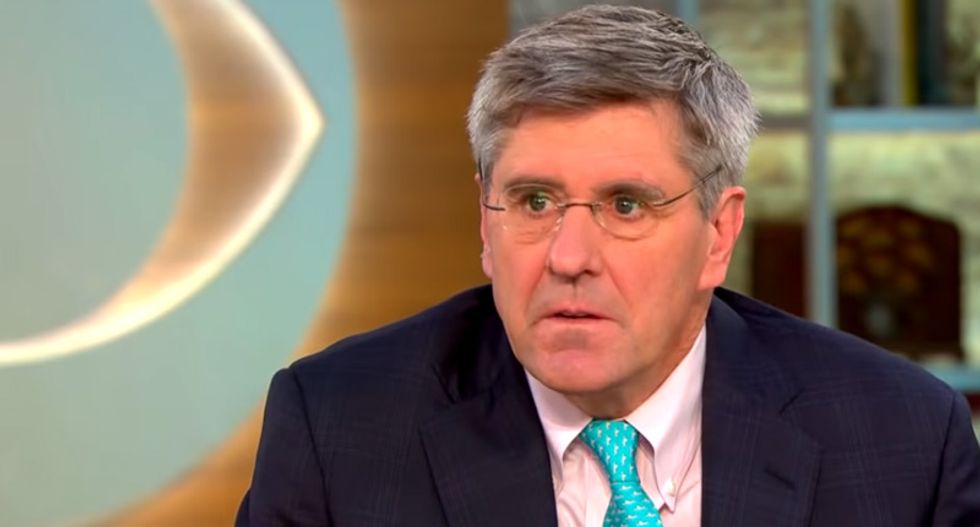 Washington Post columnist Catherine Rampell fact-checked President Donald Trump after his nomination for a vacancy at the Federal Reserve Board was based on "false" information.

Trump has allegedly picked his former economic advisor Stephen Moore to fill the position. Rampell explained that Trump made the decision after reading an op-ed in the Wall Street Journal authored by Moore and Louis Woodhill.

She said that the article claimed that "we’re experiencing deflation, and the way to address it is to follow a rule adopted by Paul Volcker in the 1980s."

"Slight problem though: Both of those claims are flat-out false. There is no deflation, and Volcker never created the imaginary 'rule' Moore is now attributing to him. I know, because I asked Volcker — as Moore once suggested I do," Rampell wrote.

She explained that Moore was unable to defend his position on CNN and when Rampell reached out to him.

"On CNN, Moore said that we should follow the 'Volcker Rule,' which he claimed was a rule Volcker set when he was a chair in the 1980s that required linking interest rates according to movements in commodity prices," she wrote.

Adding. "[What] I read through in recent days made no mention of such a rule, either, or even the suggestion that changes in commodity prices were the primary driver of interest rates during Volcker’s tenure. I consulted former Fed officials and Volcker biographer William L. Silber. No one had any clue what Moore was referring to."

"There you have it. Trump has nominated to the world’s most powerful central bank a guy who has trouble telling whether prices are going up or down," she said. "But hey, Republican senators still seem keen on him because “the establishment” keeps pointing out how inept he is."