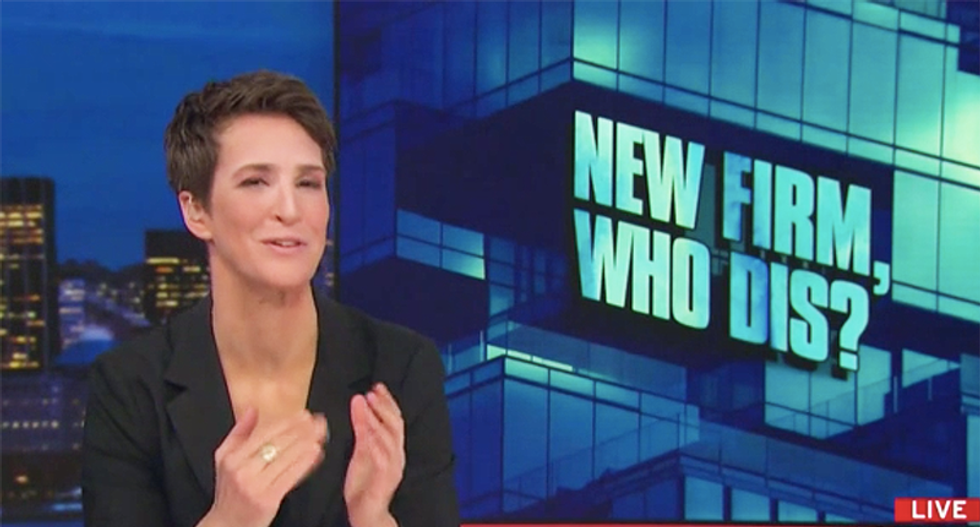 MSNBC host Rachel Maddow detailed the findings from a recent CNBC report about the money used to pay for Paul Manafort's legal fees. While there's nothing illegal with someone else paying for Manafort's lawyers, he continued to lie about it. Now, a close associate of Manafort's seems to have vanished.

In a 2018 story, Christina Wilkie uncovered an architect that Trump was using when preparing to pitch some of his projects. When Wilkie called him to ask questions, he not only didn't respond, he announced he was closing down his architecture firm. He then disappeared, until reporters began talking about his disappearance. It was only then that he released a statement.

In a similar situation, Wilkie uncovered the director of a pro-Trump super PAC who also was named godfather to Manafort's children. Lawrence "Laury" Gay was in charge of Rebuilding America Now, the most profitable pro-Trump super PAC in the 2016 election. They raised more than $24 million between June and December 2016. Gay, Manafort and Trump pollster Tony Fabrizio joined together to raise and spend gobs of "dark money" to elect Trump. When it came time for Manafort to hire lawyers, it seems those men were behind a plan for how to help.

But "who cares?" asked Maddow during her Monday show. "It's okay for you to take the money from Tony. Really, like that wasn't a bad thing."

But lying about the money and trying to hide it caught Manafort in another lie. The host explained it was one of three consequence the former campaign chair will face.

"You're going to go to prison for maybe like a decade for lying about that?" Maddow asked. "That's an OK thing for you to have done. What is the problem?"

The second consequence Manafort faces is that despite lying about the money, special counsel Robert Mueller knows about it because he has already spoken to Tony Fabrizio. So, his investigators see the truth, and they may even have documents about it.

Meanwhile, Gay has completely disappeared. According to CNBC's reporting, his office phone number has been disconnected. It promoted Maddow to harken back to Wilkie's story from 2018 where the architect disappeared. She called it the third consequences of Manafort's lies. It's strange, Maddow explained, because Gay is extremely well known for being associated with Manafort. For over 40 years, the two have been friends and associates. Now, Gay seems to be gone.

"One man's kickback scheme is another man's commission split," Wilkie joked to Maddow in an interview that followed the explainer.

Watch the fascinating explainer and interview with Wilkie below: