WATCH: To kiss the pope's ring - or not - enters the Catholic culture wars 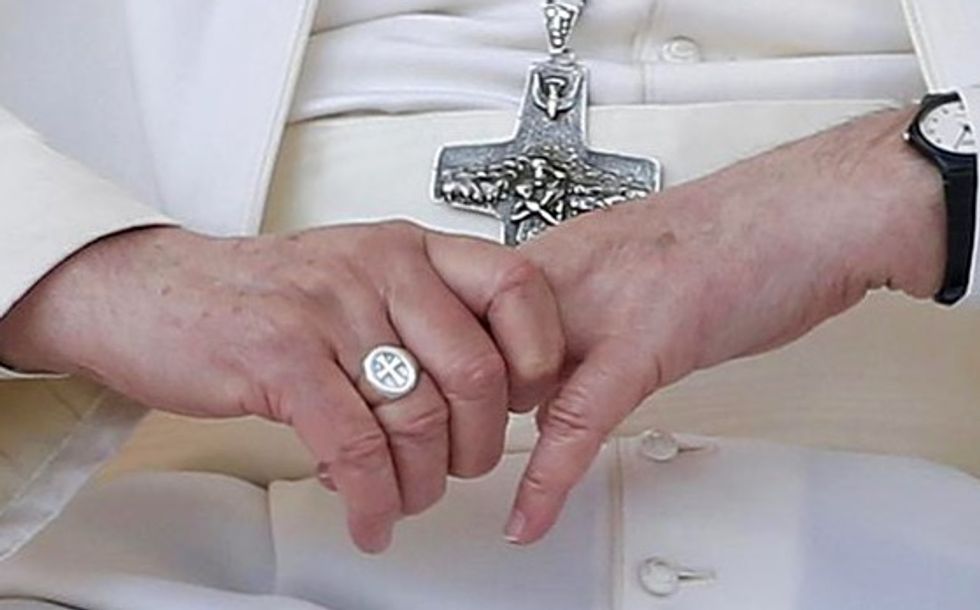 To kiss the ring on the pope’s hand or not to - that is the question.

On Monday, when Pope Francis visited a Catholic shrine in Loreto, he repeatedly withdrew his right hand as a long line of people bowed and tried to kiss the ring on it.

The footage went viral and the pope’s refusal quickly entered what are known as the Catholic cultural wars between conservatives and progressives.

LifeSiteNews, a conservative Catholic website that often criticizes the pope, called the episode “disturbing” in the headline of an article that included a long history of the rings pope’s wear and their significance.

Rorate Caeli, a website read by Catholic traditionalists, Tweeted: “Francis, If you don’t want to be the Vicar of Christ, then get out of there!”

Papal biographer Austen Ivereigh, a supporter of Francis, countered by Tweeting: “He’s making sure that they engage with him, not treat him like a sacred relic. He’s the Vicar of Christ, not a Roman emperor.”

“It’s high time kissing bishops’ rings disappears altogether. It’s just ridiculous and has nothing to do with tradition. It’s an import from monarchies. Much of the pomp around bishops should be ditched,” Tweeted Jesuit priest Russell Pollitt.

Some Vatican watchers noted that even former Pope Benedict, a hero to nostalgic conservatives, and his predecessor John Paul, did not like having their hands kissed - at least not by long lines of people, for the sake of expediency.

One Twitter user recalled that when he visited Pope John Paul with a group of 50 people they were told specifically not to kneel or kiss the papal hand.

The Vatican did not say why the pope was so insistent on not having the ring - a simple silver one with a cross - kissed in the long receiving line on Tuesday.

“Sometimes he likes it, sometimes he does not. It’s really as simple as that,” said a close aide to the pope who spoke on the condition of anonymity. The aide added he was “amused” by all the reaction.