How the world is marking women's day 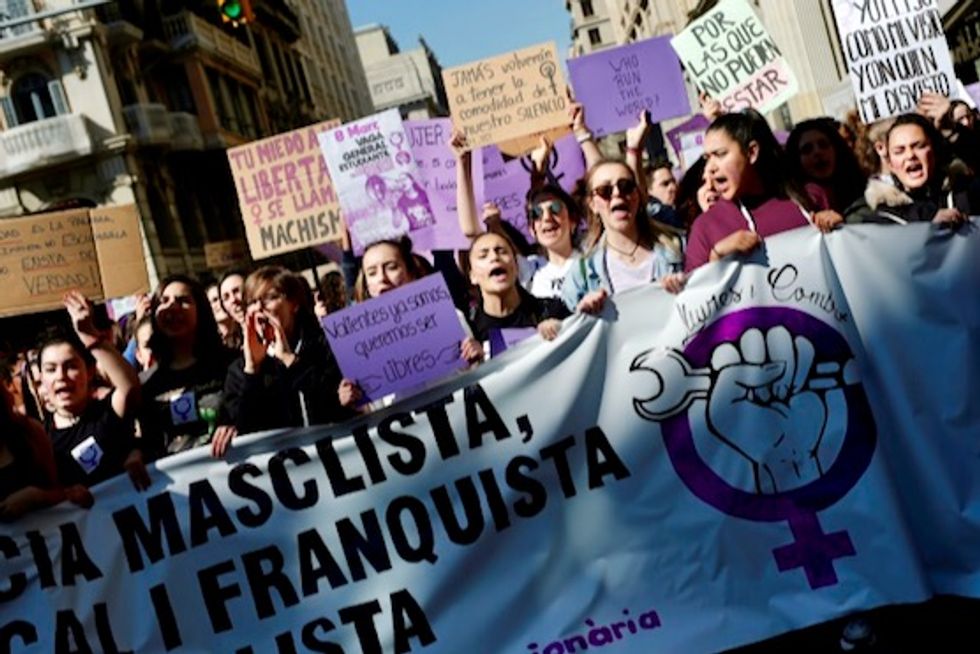 Protests, strikes and studies -- people around the globe are taking action to mark International Women's Day and to push for action to to obtain equality.

Here are some of the events:

In Turkey authorities sought to quash Women's Day demonstrations on Friday, with police firing tear gas to disperse a sea of demonstrators at the entrance of the city's main pedestrianised shopping street Istiklal Avenue.

Protesters had gathered at the central avenue despite a ban on their protest, with crowds chanting slogans including: "We are not silent, we are not scared, we are not obeying."

They were blocked by police in riot gear, who then used tear gas and dogs to disperse them.

Across Spain, women downed tools in a strike for equality, a mass movement which drew in female employees from across the spectrum, from nuns to journalists and even the mayor of Madrid, Manuela Carmena. Authorities said more than half a million people took part in Women's Day protests in Madrid and Barcelona.

In France, thousands of people took to the streets to mark the day, with demonstrators in Paris carrying banners with slogans including "Equal pay, equal work" and "we will never be silent again".

About 4,000 demonstrators marched through Manila chanting slogans against President Rodrigo Duterte, who has repeatedly made jokes about rape and last year admitted indecently touching the family maid when he was a teenager.

AFP / Filippo MONTEFORTE Women dressed as handmaidens protest outside the Italian labour ministry over gender-based violence, discrimination, and harassment in the workplace

Aides brushed off his comments as jokes, but activists have denounced his "misogynistic" statements as "unacceptable, pointing to statistics showing a 153 percent increase in rape from the decade before he was elected.

With one woman or child raped in the Philippines every hour, activists aiming to raise awareness about gender-based violence staged an exhibition of clothes worn by victims, called 'Don't tell me how to Dress'.

- Flowers for mums and wives -

In Pyongyang, Flower Shop No. 5 did a brisk trade in flowers on International Women's Day, which is a full public holiday in North Korea, as a steady stream of customers turned up to buy blooms for their wives, mothers and significant others.

As the North's founder Kim Il Sung once said: "In our country, women are in charge of one of the wheels of the revolution."

And his attitude has expression in the dictionary which features sample phrases like "If women are confined to their homes and remain away from labour and organisational life they cannot be revolutionised."

Of all the factors blocking equality in employment, the biggest is the heavy burden of caregiving borne by women, a UN report has found, saying the pace of change will only change if men take on far more unpaid tasks at home.

"In the last 20 years, the amount of time women spent on unpaid care and domestic work has hardly fallen, and men's has increased by just eight minutes a day," said Manuela Tomei of the UN's International Labour Organization.

Globally, women perform more than three-quarters of the total time spent on unpaid care work, averaging four hours and 25 minutes per day, while men only do one hour and 23 minutes.

"The imbalanced division of work within the household between men and women is one of the most resilient features of gender inequality," the report said.

- Designed with a gender bias? -

Women's lives are impacted every day by a built-in "gender data gap" that touches everything from urban life to design, says a new book called "Invisible Women".

British author Caroline Criado Perez says it is the story of "what happens when we forget to account for half of humanity", citing examples which range from slight irritations to life-threatening situations.

From cars designed using crash-test dummies based on the average male, to doctors misdiagnosing women suffering a heart attack because their symptoms differ from those of men, the bias pervades modern society, and can have fatal consequences, she says.

Even consumer products are often male-centric with voice recognition software far more likely to accurately recognise men's speech, and mobile phones often too large for women's hands. "Designers may believe they are making products for everyone, but in reality they are mainly making them for men."

- In the director's chair, but paid less -

The number of films directed by women has risen steadily in France over the past decade, but there remains significant inequality, notably in salaries, a study by the French film council says.

But wages were notably lower, with women directors earning on average 42.3 percent less than their male counterparts.

Australia's government used International Women's Day to take aim at Wicked Campers, a "misogynistic" campervan firm known for its fleet of vehicles spray-painted with crude, sexist graffiti and slogans, which have sparked outrage.

"We have no tolerance for sexist, misogynistic and offensive slogans on campervans," said Minister for Women Kelly O'Dwyer, while Transport Minister Michael McCormack said they "belong in a junkyard, not on Australian roads."

Pope Francis praised women as the source of peace, hailing their contribution to building a world "that can be a home for all".

"Women make the world beautiful, they protect it and keep it alive. They bring the grace of renewal, the embrace of inclusion, and the courage to give of oneself," he said.

"Peace, then, is born of women, it arises and is rekindled by the tenderness of mothers. Thus the dream of peace becomes a reality when we look towards women... If we dream of a future peace, we need to give space to women."

On receiving the 100,000-euro prize ($112,000) Doumara dedicated it to "all women victims of violence and forced marriages" and to those who had escaped the clutches of Boko Haram, the jihadist movement which emerged in Nigeria a decade ago and has terrorised the region.

- Day of mourning for murdered women -

Portugal on Thursday observed a day of mourning to remember women killed by domestic violence, with flags at half mast and ministers pausing for a minute during the cabinet meeting.

Last year, 28 women were killed by their partner or former partner, women's rights groups say, with local media saying another 12 had died so far this year. "The violence must end and this is a collective challenge for every society and everyone among us," Prime Minister Antonio Costa wrote on Twitter.

- Abuse affects one in three -

Figures released in an OECD report showed that one in three women have suffered from domestic abuse. But since its last report in 2014, another 15 countries have adopted legislation to criminalise domestic violence, meaning 132 countries now criminalise it while 48 do not, it said.

In a second report, the OECD found that addressing gender inequalities and encouraging women's participation in the workforce could boost the global economy by $6 trillion, or 7.5 percent of GDP.