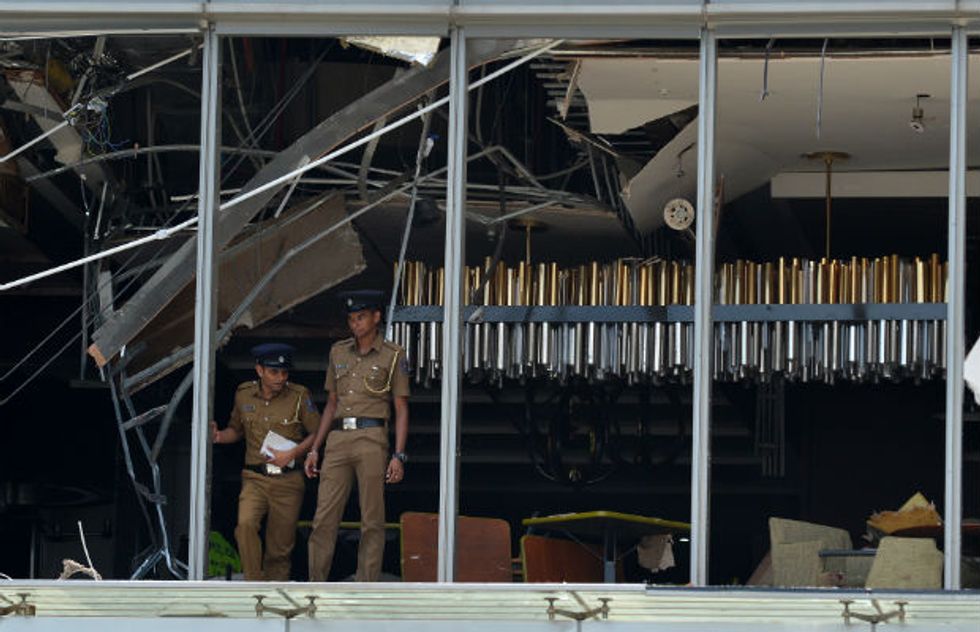 Multiple explosions have hit churches and hotels in and around the Sri Lankan capital of Colombo, killing more than 130 people as worshippers attended Easter services, police and hospital sources said Sunday.

In just one church, St. Sebastian's in Katuwapitiya, north of the Sri Lankan capital, more than 50 people were killed, a police official told Reuters, with pictures showing bodies on the ground, blood on the pews and a destroyed roof.

Local media said 25 people were also killed in an attack on a church in Batticaloa in Eastern Province, where more than 300 injured people were rushed to a local hospital.

A security official told the Associated Press that the death toll was 138 people, and included worshippers and hotel guests. Other police sources said several foreigners were among the dead.

The three hotels where the blasts took place are in Colombo and are frequented by foreign tourists.

Local TV showed damage at the Cinnamon Grand, Shangri-La and Kingsbury hotels. The Shangri-La's second-floor restaurant was gutted in the blast, with the ceiling and windows blown out.

Prime Minister Ranil Wickremesinghe called a national security council meeting at his home for later in the day.

"I strongly condemn the cowardly attacks on our people today. I call upon all Sri Lankans during this tragic time to remain united and strong," he said in a tweet.

The first explosions were reported at St Anthony's Church in Colombo and St Sebastian's in the town of Negombo just outside the capital.

"A bomb attack to our church, please come and help if your family members are there," read a post in English on the Facebook page of St Sebastian's Church.

Local witness Alex Agileson, who was in the vicinity, said buildings in the surrounding area shook with the blast. He said a number of injured were carried in ambulances.

Dozens of people injured in the St Anthony's blast flooded into the Colombo National Hospital by mid-morning, an official told AFP.

He said he had been to two of the attacked hotels and was at the scene at St Anthony's Shrine and described "horrible scenes".

"I saw many body parts strewn all over," he tweeted, adding that there were "many casualties including foreigners".

Photos circulating on social media showed the roof of one church had been almost blown off in the blast. The floor was littered with a mixture of roof tiles, splintered wood and blood. The images could not immediately be verified.

Only around six percent of mainly Buddhist Sri Lanka is Catholic, but the religion is seen as a unifying force because it includes people from both the Tamil and majority Sinhalese ethnic groups.

Christian groups say they have faced increasing intimidation from some extremist Buddhist monks in recent years. And last year, there were clashes between the Sinhalese Buddhist community and minority Muslims.