More than 5,600 migrant kids are living in Texas shelters 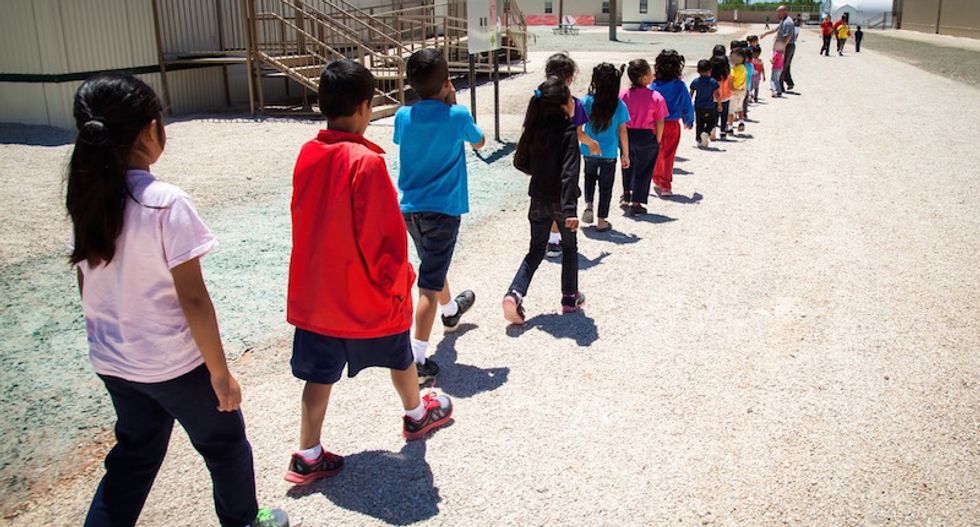 The number of children in Texas shelters remained relatively flat even as the number of migrants arriving at the border has surged.

Federal officials say apprehensions and denials of entry were expected to reach more than 100,000 throughout the southwest border in March, a 12-year high — and more than half of those were families with children. About 10 percent were unaccompanied minors, who are sometimes sent to these shelters temporarily if officials cannot find U.S.-based sponsors to take them in.

There was a large decline in children in Texas shelters in January, when a temporary shelter in Tornillo, near El Paso, closed. The hastily built tent city was designed for 360 children when it opened in June, but by December it held 2,700 children. The Trump administration announced in late December it would relax screening policies that immigrant-rights groups have blasted for slowing placement of migrant kids with relatives and other sponsors.

On Dec. 19, state data showed 8,549 children in shelters for unaccompanied youth across the state. That number dropped to 5,659 as of Feb. 21 — after Tornillo closed. The most recent data shows an increase of just 23 children in the 35 remaining shelters as of March 21.

As of March, more than 5,600 unaccompanied migrant childrenlived in 35 shelters across Texas.

Shelters are meant to serve as temporary homes for children after they arrive in the U.S., typically without adults, before they can be placed with U.S.-based sponsors — typically family or friends. Despite the recent decrease, the number of children held in shelters across the country has increased dramatically since last summer. It’s unclear how much of the surge can be attributed to a greater number of unaccompanied children arriving at the U.S.-Mexico border and how much is the result of federal policies that have slowed the rate at which children are paired with sponsors.

According to the federal government, some of the children have been released sooner than anticipated because, in late December, the administration ended a portion of its strict screening policies that had slowed the placement of migrant kids with relatives.

On Dec. 19, a spokesperson for the U.S. Department of Health and Human Services said the Office of Refugee Resettlement would still fingerprint sponsors and cross-check their information with FBI national criminal history, state repository records and U.S. Department of Homeland Security arrest records. But it said it would stop doing such extensive background checks on other members of the household.

The Texas Tribune's reporting on the Families Divided project is supported by the Pulitzer Center, which will also help bring discussions on this important topic to schools and universities in Texas and across the United States through its K-12 and Campus Consortium networks.

Throughout 2018, detention shelters asked regulators for permission to add more beds as the number of children in their care ballooned. The Texas Health and Human Services Commission decides whether shelters get a capacity variance, which allows them to house more children.

As of March 21, Texas’ 35 state-licensed shelters had permission to accommodate up to 6,466 children, according to the health commission. With 5,682 kids living in them, that means they’re at 88% capacity. One new shelter opened in March — Southwest Key’s Casa Sunzal, which held 100 16- to 17-year-olds on March 21.

Those shelters, licensed as child care providers, have a long history of regulatory inspections that have uncovered serious health and safety deficiencies.

A Texas Tribune review of state records found that, over the last three years, inspectors have discovered 468 health and safety violations at the facilities, which can each house anywhere from 20 to more than 1,400 children at a time.

The facilities are required to provide basic care to the children of detained migrants, including medical care and at least six hours of daily schooling. Their inspection reports, though often light on details, paint a picture of the abuses that young children may face in a foreign environment where many have language barriers and a history of trauma from the journey to the U.S.

Counts of children on this page are current as of February 2019, according to the Texas Health and Human Services Commission. Data from the U.S. Office of Refugee Resettlement is from January 2019.

Southwest Key Programs, the private contractor operating a converted Walmart in Brownsville as a shelter for more than 1,500 children, is the largest operation in Texas authorized to take in children separated from their parents. Founded in 1987, the nonprofit says its mission is to “provide quality education, safe shelter and alternatives to incarceration for thousands of youth each day.”

Inspectors found more than 200 violations at the group’s 16 facilities in the last three years, records show. On Oct. 11, 2017, at a Southwest Key facility in San Benito, an employee appeared drunk when he showed up to work. A drug test later found the employee was over the legal alcohol limit to drive. Inspectors also found shampoo dispensers filled with hand sanitizer and bananas that had turned black. In two instances, children were made to wait before receiving medical care — three days for a child with a broken wrist and two weeks for a child with a sexually transmitted disease.

A spokesman for Southwest Key said the organization had worked to correct the problems identified by regulators. Of the list of violations, spokesman Jeff Eller said, "While it's not inaccurate, it's grossly unfair to say that without acknowledging that we acknowledged our mistakes and made immediate corrections."

BCFS Health and Human Services is the second-largest contractor operating in Texas. The group operates six facilities that may accept migrant children, and it ran the now-closed temporary Tornillo shelter. It was founded in 1944, according to its website.

At a Harlingen facility owned by BCFS, employees were alleged to have struck up “inappropriate relationships” with children in their care. Children complained of raw and undercooked food, and one child in late 2016 suffered an allergic reaction after a staff member gave the child a snack.

In April at another BCFS facility in San Antonio, a staff member helped arrange for a child’s family member to send the child money — but when the cash arrived, the staff member kept it. The year before, an employee gave children “inappropriate magazine pages” that depicted naked women, while a few months before, staff members were found to have failed to supervise their wards closely enough to prevent one child from “inappropriately” touching two others.

A group called CHSI applied in August to open three new shelters — two in San Benito and one in Los Fresnos — to care for unaccompanied boys and girls up to 17 years old or as young as infants, documents show. The name refers to Comprehensive Health Services, a Florida-based company that has previously received contracts from the U.S. Office of Refugee Resettlement.

Its three shelters opened in late September or early August and have a combined capacity of 610.

Upbring operates two facilities that accept unaccompanied minors and children separated from their parents by immigration authorities. The company was previously known as Lutheran Social Services of the South.

Catholic Charities, which has worked with the federal government to resettle refugees since at least 1983, operates three shelters for unaccompanied children through its branch at the Archdiocese of Galveston-Houston.

St. Peter St. Joseph Children’s Home, which began as an orphanage in 1891, according to its website, operates an emergency shelter in San Antonio with a contract to house unaccompanied migrant children.

Shiloh Treatment Center Inc. was first incorporated in 1995, according to the Houston Chronicle. It first began receiving federal funding to house migrant children in 2013. It has been dogged by allegations of abuse following the 2001 death of 16-year-old Stephanie Duffield at the center after she was restrained by staff, but the treatment center has been found to be in compliance with state requirements. Shiloh did not respond to a request for comment.

Seton Home, which opened in 1981, according to its website, operates a facility in San Antonio.

Disclosure: Jeff Eller, a communications adviser to Southwest Key, is a donor and former board member of The Texas Tribune. Upbring has been a financial supporter of The Texas Tribune. The Tribune is a nonprofit, nonpartisan news organization that is funded in part by donations from members, foundations and corporate sponsors. Financial supporters play no role in the Tribune's journalism. View a complete list.