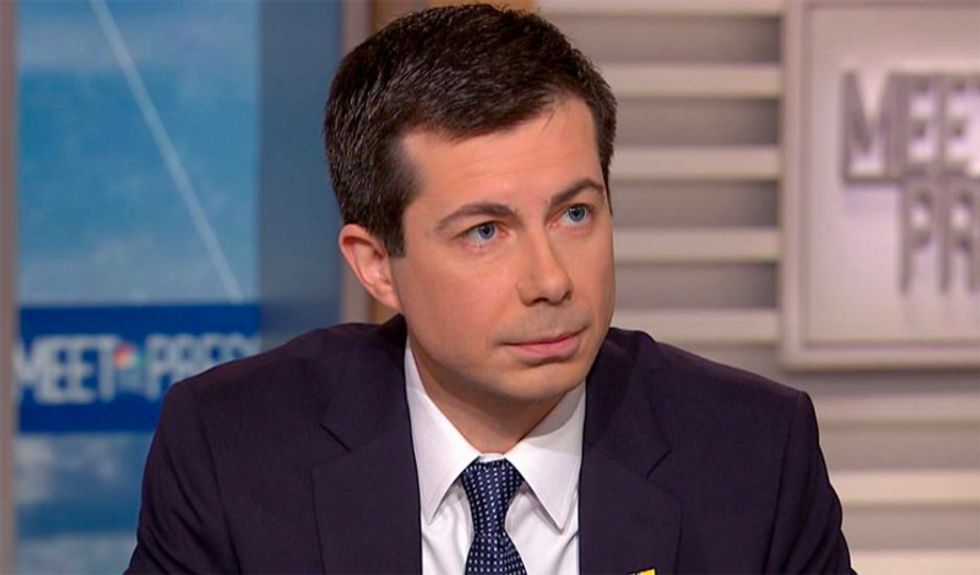 Republicans aren’t the only ones who have been discussing religion on the campaign trail. Pete Buttigieg, mayor of South Bend, Indiana and a 2020 Democratic presidential hopeful who has been climbing in recent polls, has had much to say recently about the role that religion can play in Democratic Party politics — and the nasty backlash that he is receiving from the Christian right shows just how narrow, tribalist and exclusionary their view of Christianity is.

Buttigieg, who has been questioning the Christian right’s devotion to President Donald Trump, is openly gay and a practicing Christian—specifically, an Episcopalian. In Christianity, Episcopalians (known as “Anglicans” in the U.K.) are referred to as “Mainline Protestants,” which essentially means non-fundamentalist Protestants. Lutherans, Presbyterians and members of the African Methodist Episcopal (AME) Church are also examples of Mainline Protestantism, and they favor a much more moderate brand of Christianity than the one championed by far-right fundamentalist groups like Focus on the Family and the Family Research Council.

Christianity is broad and diverse, and even though Buttigieg is white, his views have a lot more in common with African-American AME congregations than with Dr. James Dobson, Tony Perkins and other white fundamentalists to which Trump has pandered. The AME Church has a long history of promoting liberal and progressive causes, and politically, AME congregations part company with the Christian right in many respects.

The attacks on Buttigieg underscore the strong divisions within Protestant Christianity. And far-right blogger Erick Erickson is attacking not only Buttigieg, but the Episcopal Church in general. On April 7, Erickson tweeted, “If Buttigieg thinks evangelicals should be supporting him instead of Trump, he fundamentally does not understand the roots of Christianity. But then, he is an Episcopalian; so he might not understand Christianity more than superficially.”

In an April 7 piece for PJ Media, fundamentalist Paula Bolyard accused Buttigieg of promoting a “reductionist” and “truncated” version of Christianity that “leaves out the bits about sin, repentance and judgment.” Bolyard, who describes the South Bend mayor as “an openly gay man who supports the murder of babies on their way out of the birth canal,” is quite selective in her outrage: she is a Trump apologist (although she says she didn’t vote for him in 2016) despite allegations that he had extramarital affairs with a porn star (Stormy Daniels) and a Playboy model (Karen McDougal) and paid them hush money to keep quiet.

But as Bolyard sees it, Trump is “celebrating our nation’s Christian heritage”—while Buttigieg champions “the bigoted policies that the radical, anti-Christian left has achieved over the last few decades.” Bolyard is a tribalist, and what she’s really saying is that she considers Trump part of her tribe, unlike Buttigieg.

Former President Barack Obama and his wife, former First Lady Michelle Obama, have a long history of attending church—while Trump has never been especially religious. And yet, the Christian right considers Trump pro-Christian and Obama anti-Christian. The Obamas, like Buttigieg, have embraced a non-fundamentalist form of Christianity. And to the Christian right, that makes them only slightly better than Satanists.

Buttigieg also parts company with the Christian right when it comes to a doctrine known as “prosperity theology” or “the prosperity gospel”—which teaches that the rich are rich because God holds them in higher regard than the poor. The New Testament famously states, “It is easier for a camel to go through the eye of a needle than for a rich man to enter the kingdom of God,” but that’s one part of the Bible that proponents of “the prosperity gospel” frequently ignore.  And the Sound Bend mayor has criticized far-right evangelists for their “exaltation of wealth and power, almost for its own sake, that in my reading of the scripture, couldn’t be more contrary to the message of Christianity.”

Hedges has stressed that the Christian right has no use for non-fundamentalist Christians. And one sees the type of mentality he describes at work when fundamentalists have such an angry reaction to Buttigieg’s assertion that Christianity is compatible with the ideas of the Democratic Party.

If Buttigieg and Trump were to take multiple choice quizzes on the Bible, the South Bend mayor would probably score much higher. But how well Buttigieg would perform on such a quiz is irrelevant to the Christian right, which view him not as representing simply another branch of Christianity, but as one of the infidels.