Black identity in the spotlight at Paris' Musée d’Orsay 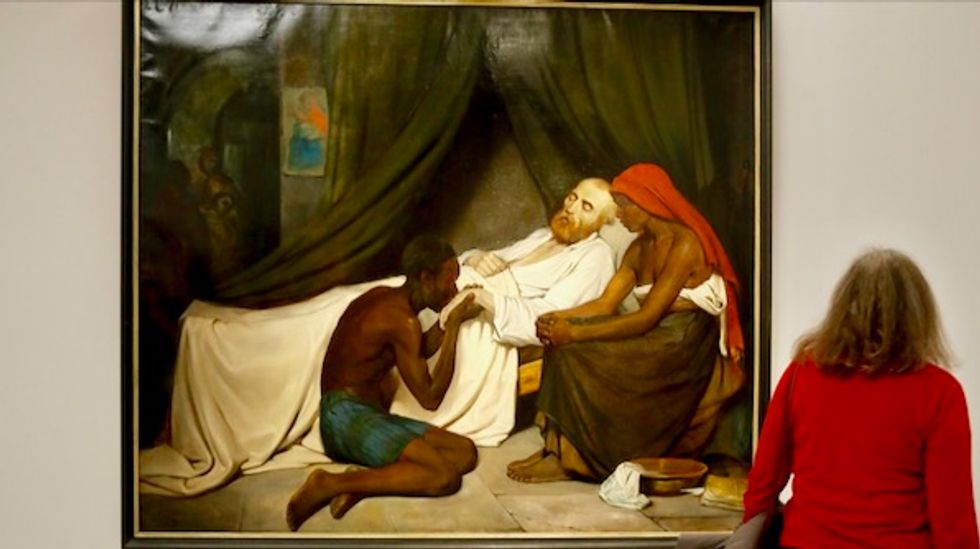 François Guillot, AFP | A visitor looks at 'Mort de Camoens' (1834) by Joseph Léon Rolland de Lestang-Parade, during the press visit of the exhibition 'Black models: From Géricault to Matisse' at the musée d'Orsay in Paris on March 25, 2019.

Black identity is being put firmly in the spotlight at a landmark exhibition at Paris’s musée d’Orsay, which focuses on the ‘forgotten’ black models who inspired the French avant-garde.

In 1865, when Édouard Manet's "Olympia" went on show in Paris, it sparked a scandal in France. Conservative visitors to the Paris Salon slammed the oil-on-canvas featuring a naked, reclining prostitute and her maid as “vulgar” and “immoral”.

The black maid in the background, however, escaped the censure. In fact, she barely got mentioned by the critics.

“We talked more about the cat than the black woman in the background, who offers the bouquet of flowers to Olympia,” noted historian Pap Ndiaye in an interview with FRANCE 24.

They were called Laure, Madeleine and Joseph, and they inspired masterpieces such as "Olympia" and Théodore Géricault’s "The Raft of the Medusa". But until recently their identities were unknown, and the models themselves had been completely overlooked.

‘Black Models: From Géricault to Matisse’ aims to redress the balance by putting black identity firmly in the spotlight.

The lavish show at the musée d’Orsay, which includes more than 300 items on display, portrays people of colour in French art from the country’s final abolition of slavery in 1848 until the 1950s.

There are portraits of the mixed-race novelist Alexandre Dumas, who penned "The Count of Monte Cristo" alongside Manet’s paintings of Jeanne Duval, the "Black Venus" who was mistress and muse to the poet Baudelaire, and the Cuban singer Maria Martinez.

For French rapper Abd Al Malik, the exhibition is the symbol of an attempt at a new cultural inclusiveness.

“I am one of those people on the periphery, those people who have not been put at the centre of things… Changing the way we look at things, changing our perspective, it’s always with a view to moving forward together,” Malik told FRANCE 24. “It helps us understand our shared, national history.”

The impetus for the Paris exhibition was sparked by a doctoral thesis by US scholar Denise Murrell, who said black models had been eclipsed from art history by racism and stereotyping.

Her Columbia University thesis became the subject of a show at New York’s Wallach Art Gallery, which then grew into the much larger current exhibition at the musée d’Orsay. Next summer, it will head to Pointe à Pitre in Guadeloupe.

“It was time for France to look at these issues, for a national institution to open its doors to these issues,” Laurence des Cars, president of the musée d’Orsay, told FRANCE 24.“It deals with a great unspoken and a great unseen part of the history of art.”

It took extensive research and detective work to uncover and identify the overlooked figures. It was only by going through the family papers of the painter Marie-Guillemine Benoist that they discovered that the subject of her formerly named “Portrait of a negress” was called Madeleine. Olympia’s maid, for instance, was called Laure and that, for Cars, is the goal of "Black Models".

“The whole point is that you look at the Olympia in a completely different way when you leave the exhibition,” said Cars. “It’s a revolution in the way we look at things.”

“The exhibition also shows that Paris in particular during the 19th century was already multicultural, that there was a black Paris in the 1850s,” said Ndiaye.

It might not have been possible to put this exhibition on a few years ago, explained Ndiaye. “Things are happening in French society with forms of visibility… we are looking at the long history of black people in French society.”

Leading paintings in the exhibition have also been renamed in honour of the black models featured.

"Olympia" has been renamed "Laure" in honour of the black maid in the background.

The exhibit features all the name changes of the paintings, enabling visitors to track the name and history of each painting.

“It was art history that left them out,’ Murrell told AFP. "It has contributed to the construction of these figures as racial types as opposed to the individuals they were.”

“If they had been European," added Murrell, "their real names would have been revealed at the time."

Before a wave of black volunteers from France’s former colonies such as Senegal fought in the trenches of World War One, their role was usually confined to that of servant, circus performer, prostitute, nanny or wet nurse.

In this exhibition, they finally get their due.

The CIA has concluded that US diplomats suffering mysterious headaches and nausea in what has been dubbed "Havana Syndrome" were not targeted in a global campaign by a foreign power, reports said Wednesday.

NBC News, The New York Times and Politico cited multiple officials briefed on a CIA intelligence assessment on the incidents that first surfaced among diplomats in 2016 in the Cuban capital, in which US and Canadian officials complained of severe headaches, nausea and possible brain damage after hearing high-pitched sounds.