CNN's Cuomo rips former White House lawyer for defending Trump's lawlessness: 'You're a little out of your depth' 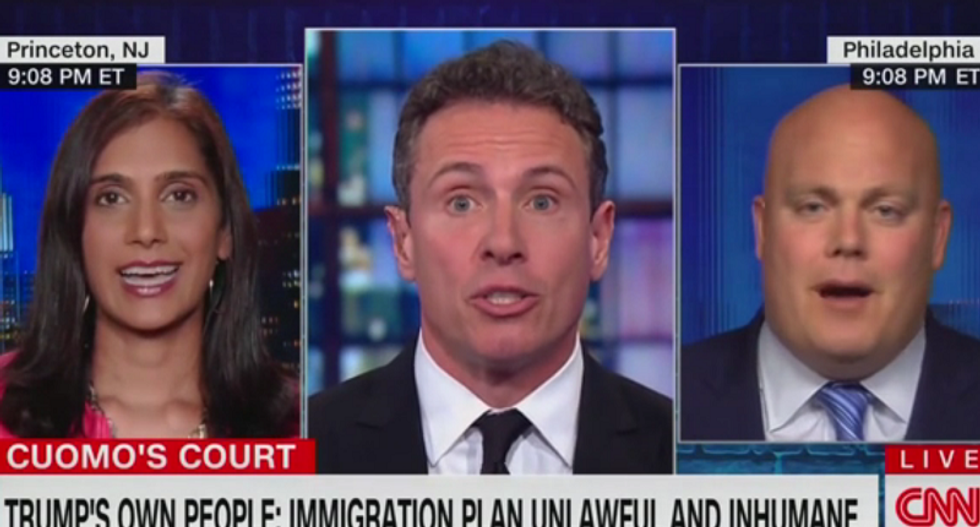 "No, this is not just a one-off," said Rangappa. "He does not respect the law and Jim, I don't see how as a lawyer, as a member of this profession that you can dismiss this as being an off-the-cuff or a joke. If you're a heart surgeon, you don't joke about cutting the wrong artery."

"I never said it was a joke," said Schultz. "Do you know what's a joke? The fact that Congress hasn't come to the table with anything of any use as it relates to immigration."

A mess of furious crosstalk ensued.

"He does it on a regular basis," said Cuomo.  That's why it makes people upset, because they see it as part of a pattern and people like you that want to support him that don't call it out."

"And courts, and courts that can call it out—" began Schultz.

"Courts that he calls rigged," Cuomo cut in heatedly. "Judges that he accuses of animus if they're ethnic."

"The president thought the fence would be the fix," Cuomo continued. "It isn't. The system is overwhelmed in a way that the fence will never solve. Everybody knows it. He's doing nothing even with an emergency declaration where he could use the military and build tent cities. He's not doing it because he's all about the fence and nothing else ... instead of saying Congress sucks all the time, why doesn't he reach out to Congress?"

"He sat in the office with Nancy Pelosi and Chuck Schumer because Congress wasn't willing to come to the table," said Schultz.

"No, he walked away and you know it," Cuomo talked over him. "You're a little out of your depth on this one. I'll forgive it, you're a lawyer and you're not a political pundant. You're wrong. You're wrong."

"This is an important policy argument, but I do think that it shouldn't distract from the gravity of what the president said, which is a legal and constitutional issue," said Rangappa. "But on the policy side I will say this. You know, first of all, when we see what he wants to do with taking these immigrants and putting them in the sanctuary cities where they'll be welcomed and protected, which is only going to encourage more people to come, we can see this is not about finding a solution. This is about punishing political enemies."

"This is about maintaining a crisis, and if he solves it there's no crisis, and then you don't get to fearmonger and do all of these things," she continued.