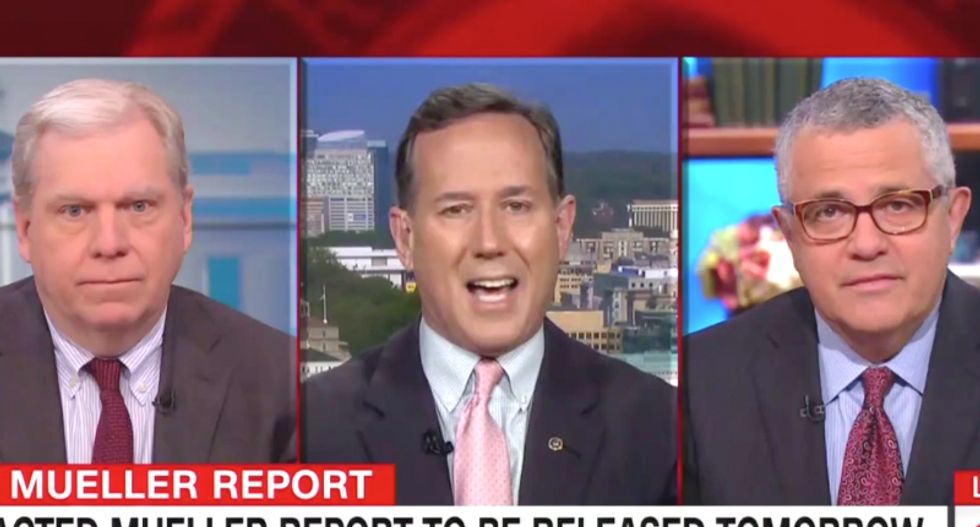 CNN senior political commentator Rick Santorum had one of his patented screaming meltdowns on Wednesday, insisting loudly that the Mueller report was a "nothingburger" until the hosts cut him off.

"The beat goes on here, 'what we don't know,'" Santorum began, already so agitated he had trouble stringing together complete thoughts.

"And we've been hearing this for two years, what we don't know and that this is speculation that all these horrible things that are out there that we're not going to know," he continued. "Because what you're going to find tomorrow, as I believe, is going to be a nothing, a nothingburger."

"Because it's been a nothingburger so far," Santorum shouted.

"As much speculation as we've had, as much as all these horrible crimes and impeachment and all these things that were going to happen and spending huge amounts of media time covering this, we have nothing," he ranted, and then accused his colleagues of journalistic malpractice.

"The reality is we still are going to say, 'well, you know, we're not going to know tomorrow,'" Santorum said. "To keep this story alive and to keep the pressure on the president we're going to continue to say that there's something we might not know, and that's just -- I just don't think that's good journalism."

"Let me just make a point of fact here," said co-host Poppy Harlow. "We would know all if Barr would turn over to Congress and the American public the full -- " Santorum howled in protest, but Harlow was undeterred.

"You very well know that he could join Nadler and go to court and ask for a 6E exemption to be able to show that grand jury material," she continued as former White House press secretary Joe Lockhart tagged in for the smackdown.

"You can have all the talking points you want that say that this is all fine," he added. "You can call it whatever you want, but this isn't over and the White House is playing into the Democrats' hands by trying to keep all this information from people."