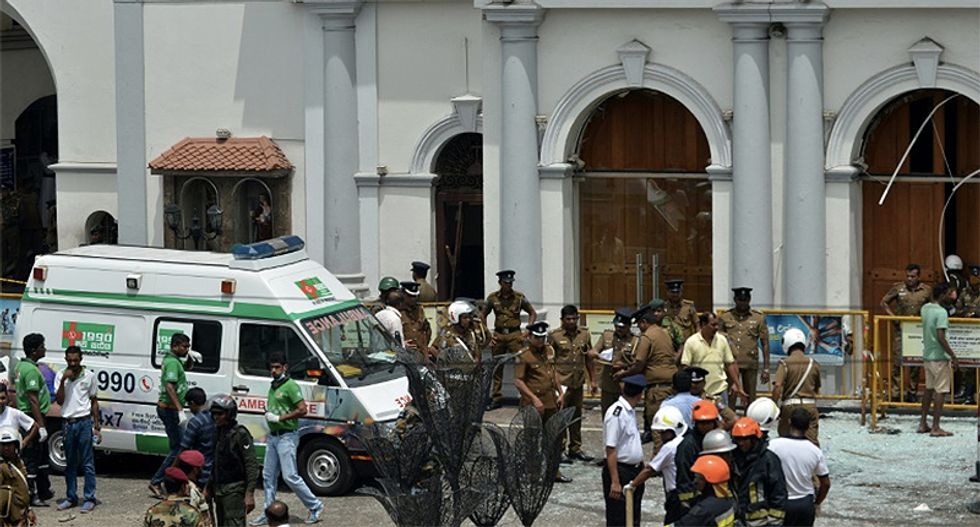 A series of eight devastating bomb blasts ripped through high-end hotels and churches holding Easter services in Sri Lanka on Sunday, killing at least 207 people, including dozens of foreigners.

The apparently coordinated attacks were the deadliest to hit the country in the decade since the end of a bloody civil war that killed up to 100,000 people and evoked painful memories for many Sri Lankans.

They also marked a devastating escalation of violence against the country's Christian minority that has been targeted in the past, but never to such brutal effect.

There was no immediate claim of responsibility, but the government said eight people had been arrested and investigators would look into whether the attackers had "overseas links".

The government also imposed a nationwide curfew and curbed social media access to prevent "wrong information" from spreading in the country of 21 million people.

At least two of them involved suicide bombers, including one who lined up at a hotel breakfast buffet before unleashing carnage.

Police said 35 foreigners were among the dead, including American, British, Chinese, Dutch and Portuguese citizens.

New Delhi said three Indians were killed, while Washington and London also confirmed an unspecified number of their nationals were among the dead.

Among the churches targeted was the historic St Anthony's Shrine, a Catholic church in Colombo, where the blast blew out much of the roof.

Bodies lay on the ground of the church, covered in patterned scarves and white sheets, some of them stained with blood.

Shattered roof tiles and shards of glass littered the floor, along with chunks of plaster blasted from the walls by the explosion.

"A foreign intelligence agency has reported that the NTJ (National Thowheeth Jama'ath) is planning to carry out suicide attacks targeting prominent churches as well as the Indian high commission in Colombo," the alert said.

The NTJ is a radical Muslim group in Sri Lanka that was linked last year to the vandalisation of Buddhist statues.

Prime Minister Ranil Wickremesinghe acknowledged that "information was there" about possible attacks and that an investigation would look into "why adequate precautions were not taken".

Ethnic and religious violence has plagued Sri Lanka for decades, with a 37-year conflict with Tamil rebels followed by an upswing in recent years in clashes between the Buddhist majority and Muslims.

Catholics make up around six percent of the island nation's population, which is a patchwork of different religious and ethnic groups dominated by Buddhist Sinhalese.

While there have been attacks on Christians, their community had been left relatively unscathed until now.

Rucki Fernando, a Christian Sri Lankan, told AFP: "We haven't experienced anything like this in the last 10 years."

"There is a lot of fear, not just in the Christian community, but among everyone," he added.

"I saw many body parts strewn all over," he tweeted.

Witness N. A. Sumanapala was near the church when the blast happened.

"I ran inside to help. The priest came out and he was covered in blood," he told AFP. "It was a river of blood."

A second blast hit St Sebastian's Church in Negombo, north of the capital during Easter Mass.

Gabriel, who declined to give his family name, said his brother was injured in the explosion, adding: "We don't want the country to go back to that dark past where we had to live in fear of suicide blasts all the time."

Soon after the first two church blasts, police confirmed that the Zion church in the east coast town of Batticaloa had been hit, along with three high-end hotels in the capital -- the Cinnamon Grand, the Shangri-La and the Kingsbury.

A manager at the Cinnamon Grand, near the prime minister's official residence in Colombo, said a suicide bomber blew himself up at the hotel's restaurant.

"He came up to the top of the queue and set off the blast," the manager said.

Later in the afternoon, two people died in a strike at a hotel in the south of Colombo, and a suicide bomber killed three police officers as they raided a house in a northern suburb of the city.

Wickremesinghe urged people to "hold our unity as Sri Lankans" and pledged to "wipe out this menace once and for all".

The archbishop of Colombo, Malcolm Ranjith, described the attackers as "animals" and called on authorities to "punish them mercilessly".

US President Donald Trump tweeted his condolences about the "horrible terrorist attacks", and Pope Francis in his Easter address at the Vatican spoke of his "affectionate closeness with the Christian community, attacked while it was at prayer".

Embassies in the capital warned their citizens to stay inside, while there were chaotic scenes at Colombo airport as worried travellers who had just arrived in the country formed huge lines at the only taxi counter that was open, and watched a TV screen for updates.

Pietro Gunesekera, who works for The Kingsbury, said guests who had bookings there were being taken to other hotels while a worker manning the Cinnamon Grand's desk at airport arrivals said several foreign tourists had opted not to stay because of the attacks.

There have been no attacks in Sri Lanka linked to foreign Islamist groups, but in January, Sri Lankan police seized a haul of explosives and detonators following the arrest of four men from a newly formed radical group.