Dem opens can of whoop-ass on William Barr over Obamacare case: 'You're not a health care policy expert' 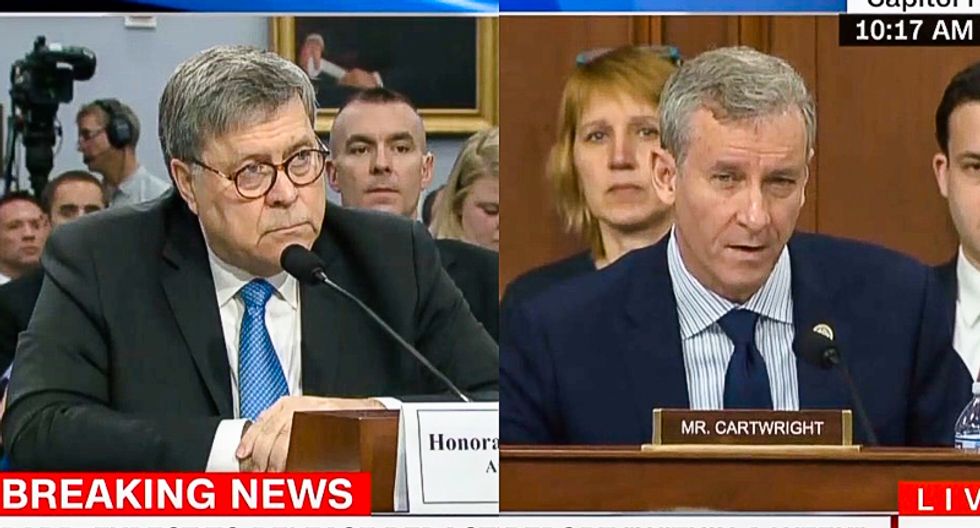 During a House Appropriations Committee hearing, Rep. Matt Cartwright (D-PA) asked Barr if he had a plan for the millions of people who will be without insurance if Obamacare is struck down.

"Your decision to pursue this course of action in the federal courts puts at risk not only critical consumer protections such as those protecting individuals suffering from pre-existing conditions but also other important provisions of that law such as the Medicaid independent coverage for young adults to age 26, coverage for preventative services and the regulatory pathway for FDA approval of biosimilar drugs," Cartwright explained.

The lawmaker continued: "Attorney General Barr, you're not a health care policy expert, but your department is taking the lead on attempting a massive overhaul of our American health care system, so I want to make sure we agree on a few of the top line facts. Let's go through a couple quick yes or no questions at the outset. Number one, have you conducted or viewed an analysis to evaluate the effects of DOJ's litigation position to overturn the ACA? The effects on consumer costs and coverage? Have you done that analysis or reviewed one?"

"Well, when we're faced with a legal question, we try to base our answer on the law," Barr said.

"So the answer is no," Cartwright pointed out. "And here's the thing. I can't imagine that you would take that kind of a dramatic, drastic action without even trying to evaluate the consequences for the American consumers, the people using the health care, the people for whom these premiums are paid."

The legislator went on to ask Barr if his effort would end in "12 million people nationally" who lose insurance.

"Do you think it's likely we're going to prevail?" Barr asked Cartwright instead of answering the question.

"If you prevail -- well, you're devoting scarce resources of your department toward that effort, are you not, attorney general?" the Pennsylvania Democrat pressed. "If you succeed, that many people will lose their coverage nationally from Medicaid and 750,000 from Pennsylvania alone."

"If you're saying it, if you think it's such an outrageous position, you have nothing to worry about. Let the courts do their job," Barr quipped.