Democrat Pete Buttigieg, the Midwest mayor who could be the 'antidote to Trump' 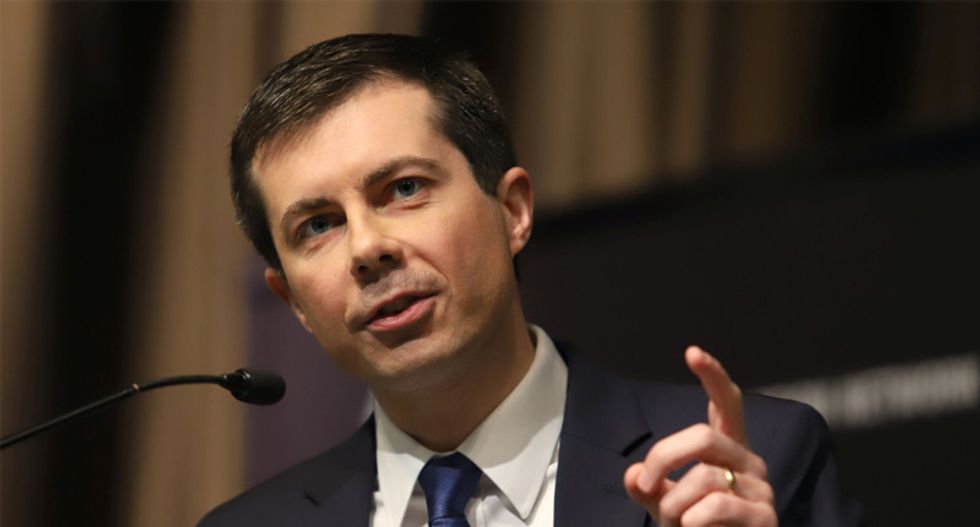 Were Pete Buttigieg to win the 2020 US presidential election, the intellectual Democrat would become the youngest person ever, and first gay man, to hold the office. The mayor of South Bend has the media’s attention and hopes the polls will follow.

His name is tricky to pronounce, so Americans just call him “Mayor Pete”. Pete Buttigieg (BOOT-edge-edge) is the man of the moment in a crowded field of candidates vying for the 2020 Democratic nomination. Not in polling terms, mind – he was at 5% in early-April, up from 1% in mid-March, for an average of 2.9% according to various polls – but for the speed with which he has occupied the media spotlight.

Still unknown just weeks ago, observers of the 2020 race now see the mayor of the diminutive city of South Bend, Indiana, in the top-five among Democratic hopefuls. He launched an exploratory committee at the end of January and is due, with great pomp, to declare his bid officially this weekend.

Buttigieg first turned heads on March 10, during a town hall event organised by CNN. In rolled-up white shirtsleeves and a blue tie, the 37 years old mayor surprised the audience with his laid-back style, down-to-earth demeanour, quick wit and fresh appeal. “I have rarely seen a candidate make better use of [a] televised Town Hall,” David Axelrod, a former Barack Obama advisor, tweeted on the night. “Crisp, thoughtful and relatable. He’ll be a little less of a long shot tomorrow.”

To the question of his lack of experience, Buttigieg, mayor of a city of 100,000, imply replied: “I would also argue that we would be well served if Washington started to look more like our best run cities and towns rather than the other way around. You’ve never heard of… a city shutting down because they couldn’t agree on a policy, right? It’s unthinkable”, he said, in reference to the record-long government shutdown that stretched through the New Year as President Donald Trump held out for border wall funding from Congress. Buttigieg’s performance was apparently so convincing that he raised $600,000 from 22,000 donors within 24 hours of the broadcast.

A polyglot who studied at Harvard, Oxford

Since that feat, Buttigieg has continued to draw media attention with his stand-out rallies and memorable remarks. In the first quarter of 2019, he collected $7 million, a figure that puts him behind Bernie Sanders ($18.2 million), Kamala Harris ($12 million) and Beto O’Rourke ($9.4 million). An astounding performance for a candidate not underpinned by a political machine. “He’s everywhere, he’s authentic and he’s interesting and counterintuitive in his message – all of which makes him both a media darling and a serious source of intrigue for primary voters,” Democratic strategist Christy Setzer told political website The Hill.

Buttigieg speaks seven languages, including French. He taught himself Norwegian. And if that weren’t enough, he also plays piano and guitar. All of which has earned him the moniker of “intellectual”, a label that has not always been a boon to presidential candidates. James Joyce’s “Ulysses” tops his list of favourite books. “Based on that alone, he can’t win,” jokes a French diplomat -- a nod to the Irish masterpiece’s abstruse reputation.

Buttigieg is tough to place as a candidate. The early sketches of his platform show him to be fairly progressive: He supports gun-law reform, action on climate change and transgender rights. He is also in favour of the idea of universal public health insurance and wants to abolish the Electoral College and reform the Supreme Court. His fundamental idea is “inter-generational justice”. In his opinion, the young are victims of their elders’ short-term vision on climate and the economy.

Still, it is Buttigieg’s Midwest roots that could help him draw support beyond the Democratic domain, suggests Constance Mixon, a political scientist at Elmhurst College in Chicago and an expert on the polarisation of American politics. “Pete Buttigieg is mayor of a post-industrial city in a state won by Barack Obama in 2008 and Donald Trump in 2016. He has appeal with voters who have felt left behind by national politicians and by a global economy,” Mixon told FRANCE 24, adding she sees the Democratic hopeful as a potential “antidote to Trump”.

Buttigieg is also a respected Navy veteran who served seven months in Afghanistan. This may have won him the unexpected respect of a number of Republicans. Conservative commentator Ben Shapiro called him “nice and refreshing”, according to Politico, applauding his willingness to engage with others across the aisle. Newt Gingrich tweeted that “Republicans should start paying attention” to Buttigieg. “He may be the unknown outsider who grows into authenticity,” the former House Speaker opined.

Buttigieg’s campaign manager told Politico that the candidate would be making appearances with media “outlets that traditional Democrats ignore”. The message: respect opponents, even when you don’t agree with them.

In terms of religious faith, a topic that Buttigieg broaches unabashedly, the relationship with conservatives is more complicated. He accuses Evengelicals of being moralising “hypocrites” because they use faith to justify electing Trump, a president associated with sex scandals and a hardline on migrants.

To Buttigieg, scripture is “about protecting the stranger and the prisoner and the poor person”, he said during the CNN town hall. “In short,” opinion writer Jennifer Rubin noted in the Washington Post, “Buttigieg is telling Democrats that they should concede nothing to Republicans on the topics of faith and values, not because (or not only because) Trump is a miserable person, but because Democrats advance politics that happen to be consistent with our deepest faith traditions – the obligation to look after children (no child separation), to treat the sick (including treating addiction as a disease, not a crime), to welcome the stranger (no, we are not “all full”) and to care for the planet (e.g., fighting climate change).”

The fact that Buttigieg is Episcopalian (a moderate branch of Protestantism) bothers some Evangelical commentators, who have already started to label him a “fake Christian”. “If Buttigieg think Evangelicals should be supporting him instead of Trump, he fundamentally does not understand the roots of Christianity,” the conservative commentator Erick Erickson tweeted. “But then he is an Episcopalian, so he might not actually understand Christianity more than superficially.”

The last straw for the most intolerant of voters might be that Pete Buttigieg is openly gay. He came out as homosexual in an op-ed in 2015. His husband, Chasten Glezman, is a junior high school teacher at a Montessori school. “I wish the Mike Pences of the world would understand… that if you have a problem with who I am, your problem is not with me. Your quarrel, sir, is with my creator,” Buttigieg said earlier this month, making reference to the vice-president’s homophobia. The line did not go without notice in a country where religion and identity are themes that have become inescapable.

“A decade ago, an openly gay mayor from a mid-size city in the Midwest would not have been taken seriously if he announced his candidacy for the President of the United States,” Mixon told FRANCE 24. “The fact that he could be a contender today speaks to changing times and demographics in the United States.”

This article has been translated from the original in French.