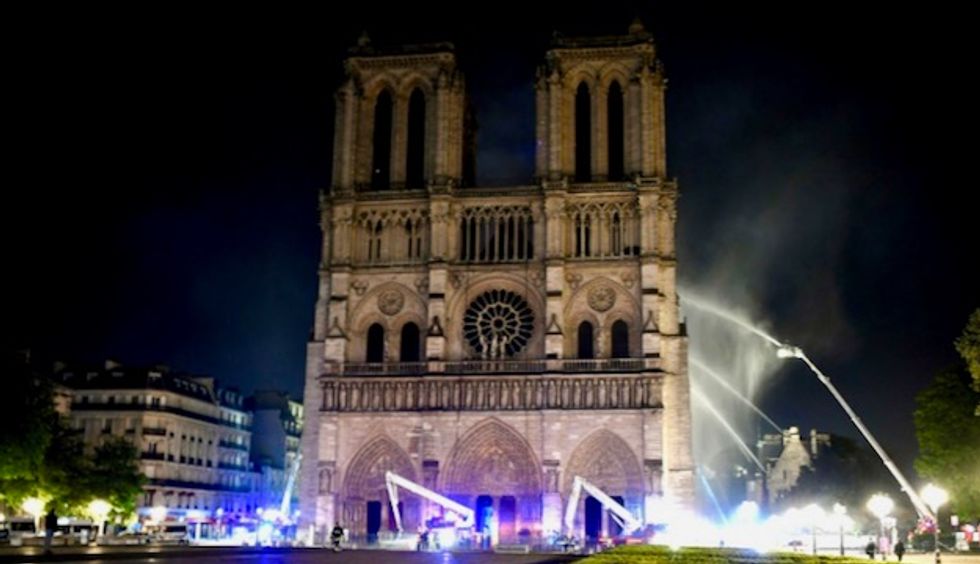 Pledges from French billionaires, businesses and the public sector to help rebuild Notre-Dame cathedral reached nearly 700 million euros (790 million dollars) on Tuesday amid an outpouring of public support for one of Europe's most iconic monuments.

President Emmanuel Macron has vowed the mediaeval monument will be restored after its spire and roof collapsed Monday night in a blaze thought to be linked to extensive renovation work.

French luxury group Kering, whose brands include Yves Saint Laurent and Gucci, kicked off the campaign late Monday with a promise of 100 million euros ($113 million).

Kering chief Francois-Henri Pinault said the intricate lattice woodwork supporting the roof that was lost in the blaze had to be replicated.

"This is why it's going to be long, extensive, but we have to do it," he told BBC radio.

That pledge was followed Tuesday by a 200-million-euro pledge from Kering's rival LVMH and the family of its founder Bernard Arnault.

Among other firms, the Credit Agricole bank gave 5.0 million, while US private equity investor Henry Kravis has promised $10 million.

Corporate contributions are expected to climb, with blue-chip firms like Vinci, Michelin and BNP Paribas also saying they were weighing how to participate.

Air France said it would offer free flights to experts brought in to help with Notre-Dame's renovation.

Pledges were also pouring in from anonymous donors to groups including the privately run French Heritage Foundation, which said it had already secured pledges totalling 3.3 million euros.

On a more modest scale, a fund set up on the Leetchi fundraising platform had topped 26,000 euros by Tuesday afternoon.

France 2 television said it will broadcast a special classical music concert Wednesday night as part of the fundraising effort.

And the French Council of the Muslim Faith also called on French Muslims to help save "an architectural masterpiece that is the honour of our country".

And French insurer Groupama said it would supply the estimated 1,300 huge oak beams needed to re-create the roof support.

The German and Italian governments have also offered to help in the reconstruction, while Russian President Vladimir Putin offered to send "the best Russian specialists with rich experience in the restoration of national heritage monuments."

Berlin Mayor Michael Muller called on his fellow citizens to contribute, citing a partnership signed between the two cities 32 years ago.

In total, nearly 700 million euros has been pledged for the painstaking renovation work that is likely to take years, if not decades, though experts breathed sighs of relief that the damage was not even worse.

The steeple of the gothic edifice had been undergoing an 11-million-euro ($12.4-million) overhaul financed by the French state to repair damage inflicted by time, pollution and the weather.

The cathedral has long relied on individual donations for repairs, and a few years ago created a US-registered charity enabling American voters to deduct gifts from their taxes.

The New York-based French Heritage Society said it had also set up a fund for tax-deductible donations for Notre-Dame in the wake of the fire.

Apple CEO Tim Cook added his company to the list of donors on Tuesday, saying on Twitter the tech giant would contribute an unspecified amount to help restore a "precious heritage for future generations."