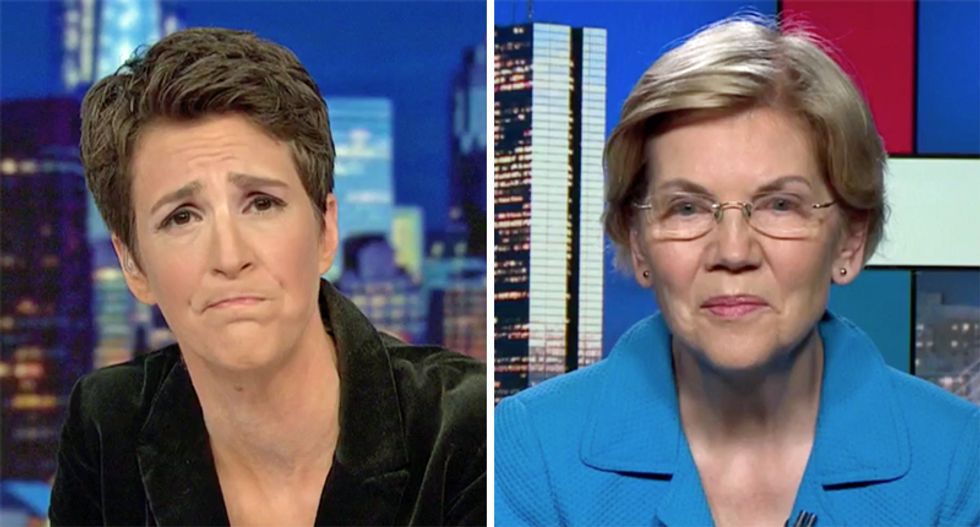 MSNBC anchor Rachel Maddow interviewed Sen. Elizabeth Warren (D-MA) only hours after she became the first 2020 candidate to call for the House to initiate impeachment proceedings against President Donald Trump.

Mueller put the next step in the hands of Congress: “Congress has authority to prohibit a President’s corrupt use o… https://t.co/zB88iTOMMo
— Elizabeth Warren (@Elizabeth Warren) 1555704351.0

The severity of this misconduct demands that elected officials in both parties set aside political considerations a… https://t.co/jShBLmNR55
— Elizabeth Warren (@Elizabeth Warren) 1555704351.0

"So you are the first Democratic presidential candidate calling for the start of impeachment proceedings, other Democrats have been saying it's not worth the political cost, not worth the civic cost or arguing it's just too soon," Maddow noted. "What made you decide to take this step today?"

"I was on an airplane yesterday and started reading it and I read it way into the night last night and I got to the end and realized, this is about a point of principle," she explained. "The report is absolutely clear, that a foreign government attacked our electoral system to help Donald Trump, he welcomed that help and then when it was investigated by our own federal authorities, Donald Trump took multiple steps to try to obstruct justice."

"This isn't about politics, this isn't even specifically about Donald Trump himself," she argued. "It is about what a president of the United States should be able to do and what the role of Congress is in saying, no, a president does not get to come in and stop an investigation about a foreign power that attacked this country or an investigation about his own wrongdoing."

"Equal justice under law, no one is above the law and that includes the president of the United States," the former law professor explained. "It is the constitutional responsibility of Congress to follow through on that."