'She should be in f*cking prison': Internet unleashes on Kirstjen Nielsen as Trump shows her the door 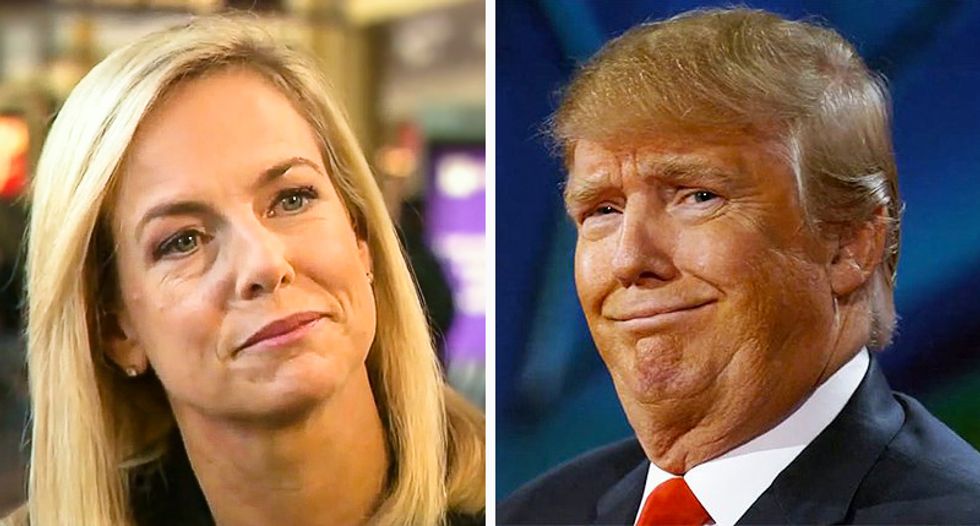 Homeland Security Secretary had no intention of resigning during her 5 p.m. EST meeting with President Donald Trump, but shortly after arriving, news leaked to CBS that she was out.

According to CNN, Trump is frustrated with current asylum laws and has worked to find ways to bar anyone from Latin American coming into the United States. He's already attempted to supersede Congress and fund his border wall using a national emergency declaration. While at the US/Mexico border Friday, Trump reportedly told border patrol officers to stop allowing people into the country altogether.

The president's absurd policies on the border reached a new level, according to CNN.

But MSNBC host Kasie Hunt refused to let Nielsen escape blame. During her Sunday opening segment, Hunt asked if becoming the face of Trump's family separation policy was "worth it."

Read the full list of attack tweets about Nielsen below:

She should be in fucking prison along with anyone else involved in these crimes masquerading as policy RT… https://t.co/RXfxRVtHuD
— John Cusack (@John Cusack)1554673867.0

Kirstjen Nielsen—who separated thousands of refugee children from their families—and made no plan to ever reunite t… https://t.co/HjiB8kt1aC
— Scott Dworkin (@Scott Dworkin)1554675130.0

If this were a TWILIGHT ZONE episode, Kirstjen Nielsen would wake up in a small cage with Latin American children o… https://t.co/wMY68NtZjo
— Harold Itzkowitz (@Harold Itzkowitz)1554676302.0

Live shot of my reaction to the news that Kirstjen Nielsen is being forced to resign. https://t.co/Jk1szFxKwQ
— Amee Vanderpool (@Amee Vanderpool)1554672796.0

Kirstjen Nielsen should have to wait two years before being able to spend more time with her family.
— Gabe Ortíz (@Gabe Ortíz)1554680231.0

Kirstjen Nielsen presided over the mass kidnapping and incarceration of children—human rights violations for which… https://t.co/sRPwvI07hr
— Jamil Smith (@Jamil Smith)1554676755.0

I will legit make it my job to make Kirstjen Nielsen's life a living hell until ALL kids are reunited with their pa… https://t.co/631C7PRXLH
— Xorje Olivares (@Xorje Olivares)1554673218.0

Has Kirstjen Nielsen been indicted yet for thousands of counts of child abuse? Asking for America.
— Scott Dworkin (@Scott Dworkin)1554675405.0

@CBSNews Kirstjen Nielsen will always be known as the woman who stood by and pretended nothing was happening as bab… https://t.co/xSCyinnUEu
— Jeff Tiedrich (@Jeff Tiedrich)1554672967.0

For what Kirstjen Nielsen has done at DHS, for the madness and cruelty she’s overseen, she deserves to be a pariah.… https://t.co/glJ5ybCGNZ
— Jared Yates Sexton (@Jared Yates Sexton)1554674829.0