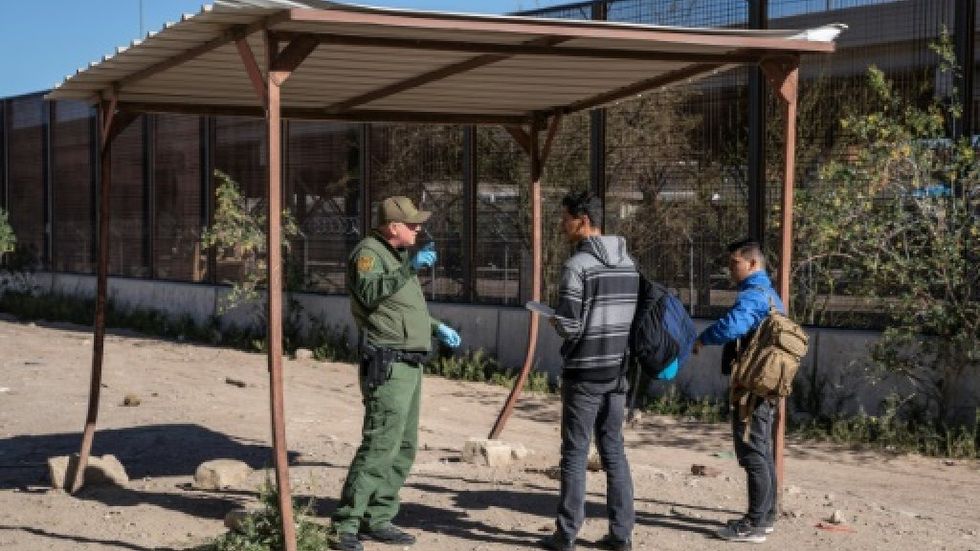 A US federal judge on Monday blocked President Donald Trump's policy of returning asylum seekers to Mexico to wait out the processing of their cases, saying the Department of Homeland Security had overstepped its authority.

The ruling by US District Judge Richard Seeborg in San Francisco marked a rebuke for the Trump administration's efforts to stop the flow of migrants seeking asylum through the US border with Mexico.

The decision, which goes into effect on Friday, also comes just days after outgoing Homeland Security Secretary Kirstjen Nielsen had vowed to expand the controversial program.

Several hundred people seeking asylum have been returned to Mexico to await the outcome of their request under the policy first implemented in January at the San Ysidro port of entry in California and later extended to Calexico, a second California border point, and El Paso, Texas.

"Try as it may, the Trump administration cannot simply ignore our laws in order to accomplish its goal of preventing people from seeking asylum in the United States.

The ACLU and several other groups, including the Southern Poverty Law Center, had sought an injunction against the policy on behalf of 11 asylum seekers from El Salvador, Honduras and Guatemala who were returned to Mexico after seeking asylum at the US border.

In his 27-page ruling, Seeborg said at issue was not whether the MPP is "a wise, intelligent, or humane policy" but rather whether it exposes aliens to "unduly dangerous circumstances."

He noted that the plaintiffs in the case were not challenging the "system" of expedited removal.

"Indeed, in essence, plaintiffs are arguing that because they are subject to expedited removal, they should at a minimum have the protections they would enjoy under that regime, either by being exempt from contiguous territorial return, and/or by having additional procedural and substantive protections against being sent to places in which they would not be safe from persectuion," the judge wrote.

There was no immediate reaction from the Department of Homeland Security or Trump on the ruling, which can be appealed.

Trump, who originally dubbed the measure the "Remain in Mexico" policy, unveiled it last year as a series of caravans with thousands of Central American migrants made their way to the US-Mexican border.

He called the caravans an "invasion" by "thugs" and "criminals," and regularly pointed to them as evidence in support of his declaration of a national emergency on the southern border and plans to build a wall there.

Mexico said it was cooperating with US authorities concerning the migrants being sent back, but only for humanitarian reasons.

Migrants who reach US soil have a legal right to seek asylum and are usually held in detention facilities while their application is processed or released into the United States.

A key suspect in the assassination of Haitian President Jovenel Moïse has been arrested in Jamaica by U.S. authorities and Interpol. Mario Palacios Palacios, a former Colombian military officer was, arrested in Kingston earlier this month. The arrest had remained secret. Palacios' arrest was confirmed by multiple Haitian and Jamaican sources speaking to the Miami Herald on the condition of anonymity. Haiti police say former Colombian soldiers made up the hit squad that stormed Moïse’s private residence in the middle of the night on July 7. Yelling that their presence was part of a U.S. Drug En...

“When we are faced with a coordinated effort across our country to limit the freedom to vote, we must stand up and do what is right," Sen. Amy Klobuchar, D-Minn., who sponsored the bill, said on the Senate floor just before the party-line vote.