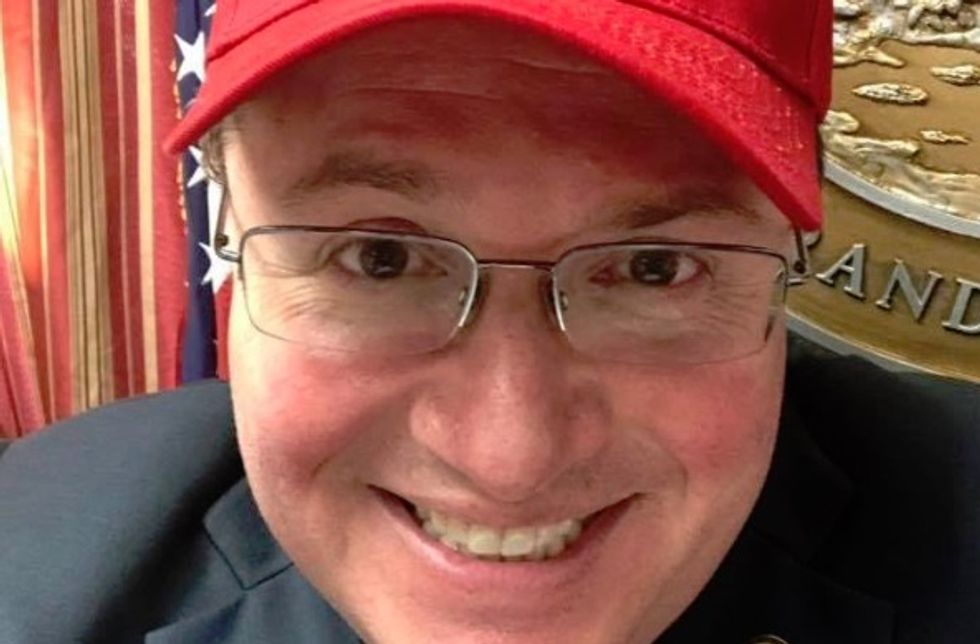 Republican Florida State Rep. Randy Fine this week accused a fellow Jewish man of being a Nazi collaborator after he defended a panel discussion that was critical of Israel's current right-wing government.

The Orlando Sentinel reports that controversy started when Fine attacked a local organization called the Space Coast Progressive Alliance for sponsoring a panel discussion about the conflict between Israel and the Palestinians. Fine particularly drew backlash when he referred to the organization as an "anti-Semitic rally targeting Jews sponsored by a Democrat club," even though three of the five speakers at the panel were Jewish.

Alliance board member Paul Halpern called out Fine and said that he was completely mischaracterizing the event his organization was sponsoring.

"I was at the event," Halpern said. "I am Jewish. There was nothing anti-Semitic said. Questioning the policies of the Israeli government is not anti-Semitic. Many people from various organizations were invited to speak and chose not to. Three of the five panelists were Jewish. YOU, Rep. Fine, were not there."

Fine responded by questioning Halpern's faith before calling him a "Judenrat," which is a term used to describe Jews who collaborated with Nazis.

"That is the most offensive thing ever said to me," Halpern wrote back. "You have no business representing anyone. Where can I meet you in person so you can call me that to my face?"

"I know that Judenrat liked to keep tabs on all the Jews in order to report back to the Nazis back in that time, but no one is making you continue that tradition today," Fine replied.

Phil Stasik, the president of the Alliance, said it was highly inappropriate for a state representative to accuse a fellow Jewish man of collaborating with Nazis.

"We’re extremely disappointed by the use of hate speech that has so poisoned the discourse in our country," he said. "And it’s exceedingly disappointing coming from an elected representative. It’s clearly hate speech and is unacceptable."

By Guy Faulconbridge and Kylie MacLellan LONDON (Reuters) -British Prime Minister Boris Johnson's office apologized to Queen Elizabeth on Friday after it emerged that staff had partied late into the night in Downing Street on the eve of Prince Philip's funeral, at a time when mixing indoors was banned. Johnson is facing the gravest crisis of his premiership after almost daily revelations about a series of social gatherings during COVID-19 lockdowns, some held when ordinary people could not bid farewell in person to dying relatives. After building a political career out of flouting accepted nor...