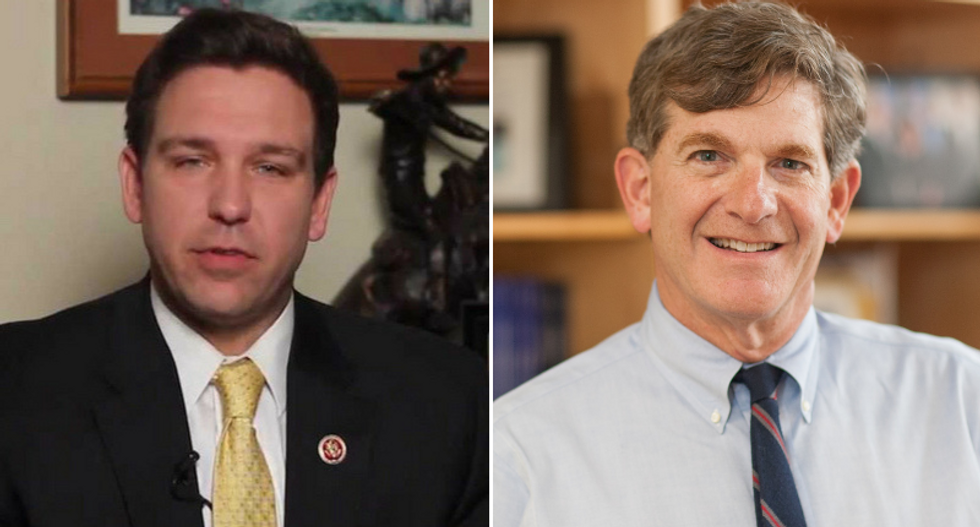 Florida Gov. Ron DeSantis (left, via screengrab) and his surgeon general pick Scott Rivkees (right, via the University of Florida).

Florida Gov. Ron DeSantis (R) is standing by his surgeon general nominee after an investigation into the pick's alleged sexual harassment was revealed.

The News Service of Florida reported Tuesday that DeSantis made comments defending Scott Rivkees, a physician and the former chairman of the Department of Pediatrics at the University of Florida College of Medicine, as his surgeon general nominee.

"My thing is, if we have a public health issue, I want somebody that is going to be able to protect the people of Florida," the governor said Tuesday morning.

"He’s been dinged for making a comment or two, which to me I don’t think rises to that level,” DeSantis said after claiming he wasn't aware of any "harassment" allegations against his nominee. “I think this is a guy who has earned great plaudits from the University of Florida."

In 2014, the University of Florida investigated Rivkees after he repeatedly "joked" to colleagues during disputes that "if we can’t agree on this we’ll all have to get naked in a hot tub and work it out."

Rivkees admitted to making the comment and told university investigators that he "may have said it more than once." He added that the pediatric ICU he worked in was in "disarray" and that he was joking.

Along with the harassment investigation, the News Service of Florida reported last week that the nominee was separately "found by a university auditor to have not properly filed financial-disclosure information."

Bill Galvano, the Republican president of the Florida Senate, said last week after the investigations were revealed that the legislative body would not vote on Rivkees' confirmation before their session ends on May 3 because they'd not had time to vet him.

"The very serious allegations against Dr. Rivkees are troubling to say the least,” Galvano said in a statement. “The confirmation process will provide the opportunity for the Senate to gather additional information, but certainly with what we know at this time, I am very concerned, as are other senators.”

The report noted that Rivkees can, however, serve as Florida's surgeon general because state law "allows two legislative sessions to expire before an agency secretary who hasn’t been confirmed must step down."