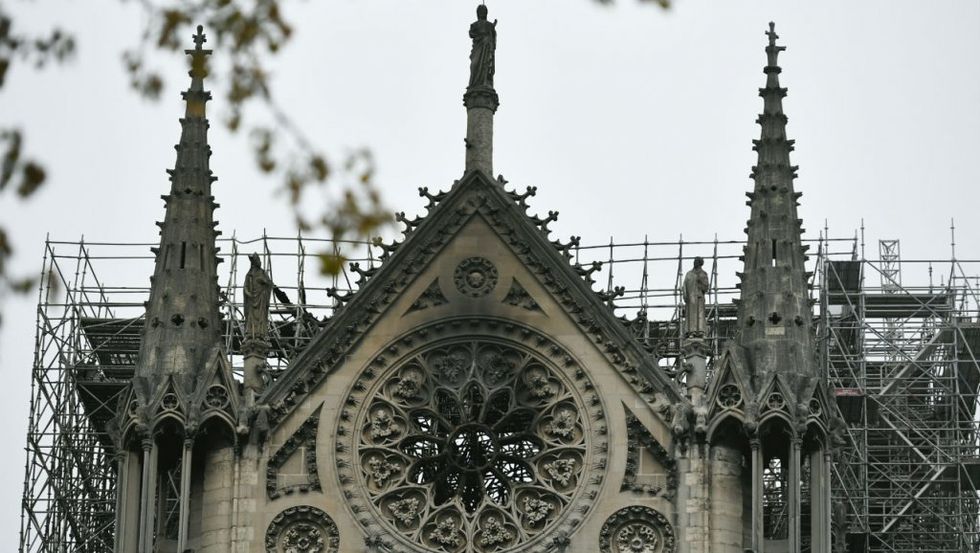 Stephane de Sakutin / AFP | Notre-Dame Cathedral in Paris on April 16, 2019, in the aftermath of a fire that caused its spire to crash to the ground.

French President Emmanuel Macron vowed to rebuild Paris’s Notre-Dame Cathedral after it was ravaged by fire on Monday, saying that he would launch a national funding campaign as international fundraising gathered momentum.

"I say to you very solemnly this evening: this cathedral will be rebuilt by us all together. ... We will rebuild Notre Dame because that is what the French expect, because that is what our history deserves, because it is our destiny," Macron declared Monday evening from the scene of the blaze.

"Notre-Dame of Paris is our history, our literature, our imagination. The place where we survived epidemics, wars, liberation," Macron said.

The UN’s cultural agency UNESCO has also promised to stand "at France's side" to restore the site, which it declared a world heritage site in 1991.

"Those wishing to contribute to the reconstruction of Notre-Dame can from noon on Tuesday, April 16 make donations via the website www.fondation-patrimoine.org. No fees will be charged. All donations will be issued with a tax receipt," Le Breton added.

The foundation’s website had been so inundated with requests that as of Monday evening it was possible to make donations via another site, National Collection for Notre-Dame of Paris.

It was not possible to put a price on the cost of repairs on Tuesday morning, but the damage is likely to be significant. Many French people had already begun to make generous donations online.

A campaign called "Notre-Dame de Paris Je t'aime!", launched by the Dartagnans website, had raised nearly €23,000 by 7:30am on Tuesday morning. Another, entitled "Financing the repairs of Notre-Dame de Paris" and launched on the Leetchi website, had raised more than €12,000 at the same time on Tuesday. Its creator, "Anonymous Parisian", was careful to specify that he had been "contacted by Leetchi's compliance and certification services in order to guarantee the proper payment of funds, in perfect transparency, to the rector of Notre-Dame de Paris cathedral and to the diocese".

Other online campaigns have also been validated, such as "Observatory of Religious Heritage" on the site "Le pot commun" (receiving more than €3000 of donations by 7:30am Tuesday morning).

In the United States, the French Heritage Society, a New York-based organisation dedicated to the preservation of French architectural and cultural treasures, launched a web page to raise funds. "Notre-Dame is obviously an architectural wonder and a monument that should definitely be restored," said Jennifer Herlein, Executive Director of the French Heritage Society.

A further fifty campaigns in connection with the cathedral fire were launched on the GoFundMe fundraising platform around the world, according to a company spokesman.

"In the coming hours, we will work with the authorities to ensure that the funds reach where they will do the most good," said John Coventry.

Overnight the Pinault family, one of the richest in France, pledged €100 million to help rebuild Notre-Dame through its investment company, Artemis.

"This tragedy strikes all French people and goes far beyond all those who are committed to spiritual values. In the light of such a tragedy, everyone wants to bring this jewel of our heritage back to life as soon as possible," said François-Henri Pinault, president of the Kering luxury group.

On Tuesday morning the Arnault family, the billionaires behind the world's largest luxury goods company, LVMH, announced they were making a "donation of 200 million euros".

Macron expressed relief that "the worst had been avoided" in an inferno that had at one point threatened the entire building.

Notre-Dame previously survived the devastation of two global conflicts in the 20th century and famously rang its bells on August 24, 1944, the day of the Liberation of Paris from German occupation at the end of the World War II.