Here's what infamous cult leaders have in common with Donald Trump 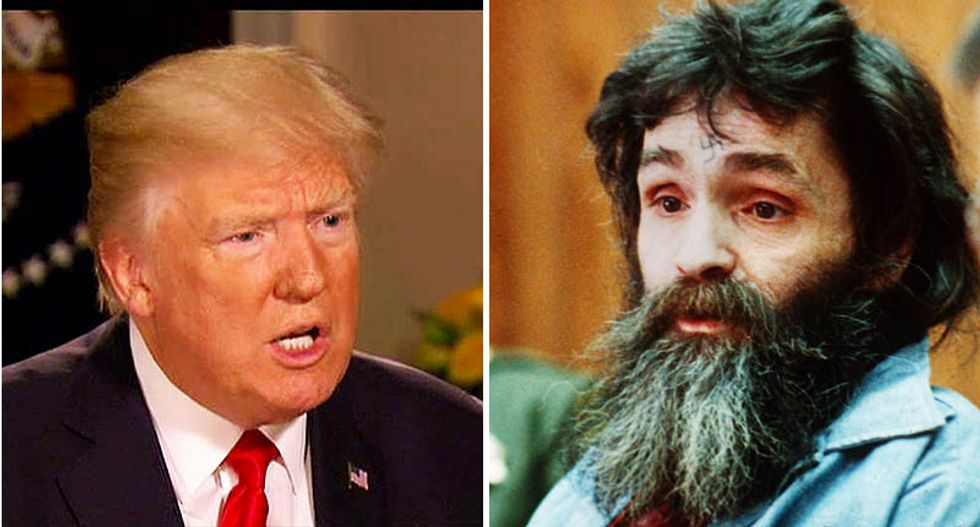 In spite of vast differences in their approaches, cult leaders all share some similarities — many of which are also shared by President Donald Trump.

"The extent to which his or her narcissism is negative — as one scholar called it, 'traumatic narcissism' — that's going to have an effect on how the group is shaped," Lalich said.

Daniel Shaw, a counselor who specializes in cult recovery who is also a cult survivor, noted in his book on the way cult leaders subjugate their followers that traumatic narcissism differs from typical narcissism (such as that of a movie star) in that it outwardly and actively harms people.

Lalich noted that the NXIVM, the alleged sex cult run by its now-indicted leader Keith Raniere, is a prime example of traumatic narcissism.

In a 2017 exposé on the cult published by the New York Times revealed that "women in NXIVM were branded with a symbol that included Raniere's initials and forced to follow 'near-starvation diets' to be physically appealing to him" and allegedly were coerced into sex with him as well.

Trump has for decades been accused of being a narcissist, and in 2018, Shaw published an article for the New School of Social Research that alleged the president and others in current American politics are employing traumatic narcissism to reach their political ends.

"I have watched with dread as these ideologues moved their paranoid agendas, full of disavowed fear and hatred, right into the center of public discourse," the cult researcher wrote. "Instead of all this being rejected by the larger public, the way Joe McCarthy or Nixon were eventually, and in spite of, and in many ways in reaction to the intelligence and dignity Barack Obama represented, we now have Donald Trump."

Lalich told Live Science that although cult leaders are by definition charismatic, their charisma is in the eye of the beholder — which is why, as the report noted, "when you see footage of Charles Manson, you might be deeply confused about how he was able to attract dozens of followers."

"Charismatic leaders tend to be intuitive," the Ohio State professor said. "They're able to read people. They thrive on chaos. They'll create crisis situations. When they walk in the room, you never know if they're going to be good and kind-hearted or be mean and call someone out or create some kind of dangerous situation."

Indeed, Trump and the loyalists in his administration have been accused regularly of manufacturing a crisis at the US-Mexico border to drum up support for his campaign-promised border wall.

Lalich added that cult leaders often make tempting promises "either to change the world, change you, make you rich [or] make you beautiful."