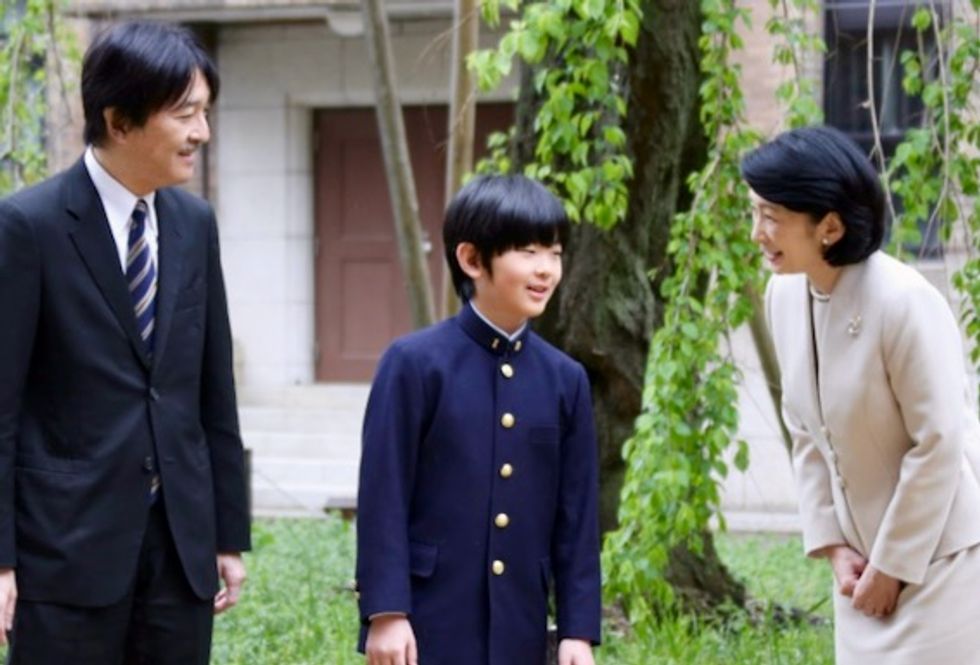 As it stands, the future of the Japanese imperial family rests on 12-year-old Hisahito, the son of Crown Prince Naruhito's younger brother and the last eligible male heir POOL/AFP / Koji Sasahara

Japanese Emperor Akihito's historic abdication later this month has reignited concerns over the future of what is believed to be one of the world's oldest royal families, given its hereditary, male-only succession rules.

As it stands, the fate of the Japanese imperial family rests on 12-year-old Hisahito, the son of Crown Prince Naruhito's younger brother and the last eligible male heir.

Japan's centuries-old succession would be broken if Hisahito does not have a male child as the Imperial Household Law, in place since 1947, does not allow women to ascend the Chrysanthemum Throne.

That means Naruhito's only child, 17-year-old Princess Aiko, is not in line to inherit the throne.

While public attitudes seem to be shifting to change the succession laws to allow women to rule, the chance of concrete reform looks remote.

According to a poll by the Yomiuri Shimbun daily between October and November, nearly two-thirds want the law revised to allow women to be the rightful heir.

"I just wonder why Princess Aiko cannot ascend the throne," Mizuho, a Tokyo resident in her 30s who only gave her first name, told AFP.

"If it's just because she's a girl, then I think it's out of place in the current era," she said.

"Why don't we allow female heirs like Queen Elizabeth in the British monarchy?"

Under the current rules, female imperial family members also lose their royal status upon marriage to a commoner, a point highlighted by the engagement of one of Akihito's granddaughters, Princess Mako, to her college sweetheart.

Traditionalists are vehemently opposed to any change in the law but there have been as many as eight empresses, with the last one, Gosakuramachi, on the throne about 250 years ago.

And the imperial family, which has a myth-filled history dating back more than 2,600 years, is said to be descended from legendary sun goddess Amaterasu.

The Imperial Household Agency of/AFP/File / HANDOUT Japanese Crown Prince Naruhito's only child, 17-year-old Princess Aiko, is not in line to inherit the throne

When the parliament passed a one-off rule allowing the ageing emperor to step down in 2017, it also urged the government to "swiftly study" reforms that would allow the sons of royal women to become emperor.

Tokyo has said these discussions will begin soon after May 1, when Naruhito ascends the throne.

But the government has also decided that only male royal adults will attend the main abdication ceremony, during which the new emperor will inherit the traditional regalia such as a sacred sword and jewel.

Politicians are dodging the looming issue of male-only succession because "they do not want to shoulder the responsibility", Yuji Otabe, professor of Japanese history at Shizuoka University of Welfare, told AFP.

"If you think about the heredity system, a woman is also of imperial blood," he said, voicing concerns about the future of the Japanese royal line if the situation does not change.

Another consequence of the male-only succession line is the enormous pressure to conceive boys to keep the line going.

The future emperor and empress were under huge pressure to have a boy but their only child -- born in 2001 -- was Princess Aiko.

The "crisis" was averted when Prince Hisahito was born in 2006 to the Crown Prince's younger brother Akishino, meaning the male blood line could continue.

After Crown Prince Naruhito takes the throne, Akishino is next in line, followed by Hisahito.

Crown Princess Masako, a former high-flying diplomat, has struggled for years with a stress-related illness after joining the tradition-heavy household, which some have put down to the pressure of producing a male heir.

Hideto Tsuboi, professor of modern Japanese literature and history at the International Research Center for Japanese Studies, argued that Masako's illness epitomises the difference between Japanese and British royals.

Japanese imperial family members "do not enjoy normal human rights due to too much emphasis on" the male-blood lineage succession system compared to the British monarchy, said Tsuboi.

Analyst Otabe also pointed to the "great pressure" on any woman marrying into the imperial family to bear a son.

"Who would want to marry (Hisahito)?" he asked.

Tokyo resident Mizuho called for change, saying: "I really don't think it has to be a man."

"As long as the person has the qualities needed to take over the throne, whether the heir is male or female doesn't matter to me."