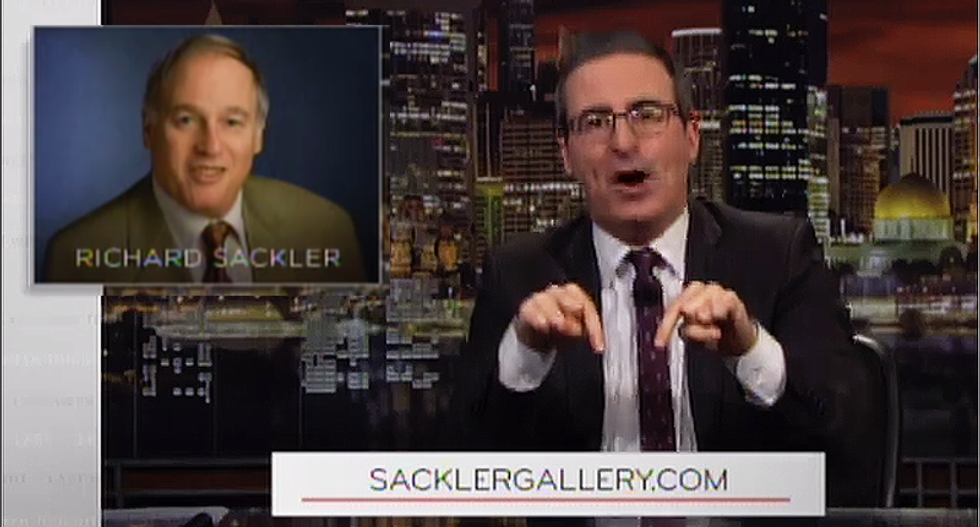 Late-night host John Oliver went after the Sackler family, who founded and owns the pharmaceutical company that created OxyContin, the opioid drug that is leading to addiction across the United States.

The "Last Week Tonight" host launched a new website called SacklerGallery.com, where videos will appear of actors reading Richard Sackler's deposition that he tried to have sealed from the public.

The idea came from the many protests around the country at museums where the Sackler family tries to donate its money. The protesters demand that the museums and galleries stop taking drug money from the family desperate to have its name on anything from an institute at Yale or library at Oxford.

"Not bad for a family whose very name sounds like a Hamburgler-like villain that steals testicles," Oliver said of the family.

The report from Oliver was the second he's done on the opioid crisis, and the third on the drug crisis. But it's been several years, and lawsuits against Purdue Pharma and the Sacklers have revealed that they were aware that their drugs were highly addictive.

"Let's pull a few of these new revelations together and look at what we've learned about how the first wave of the opioid crisis began," Oliver said at the top of the report. "Because it's a story of how major companies acted wildly irresponsible, skirted any meaningful consequences and, for the most part, avoided public scrutiny."

He began with the big three drug distributors: Cardinal Health, McKesson and AmensourceBergen. The second one, however, he noted managed to ignore a pharmacy in Kermit, West Virginia, where the population of just 400 people was getting more than 3 million doses of the narcotic Hydrocodone.

"That's just one example of McKesson's reckless behavior," Oliver said. "The problem is, at no point were they effectively deterred."

He said that in 2008, the DEA found that McKesson failed to control the narcotic and the company agreed to a $13 million fine and refused to admit wrong-doing. They promised to create a monitoring program that would catch these types of problems, but it didn't work. A DEA agent said that their "bad acts continued and escalated to a level of egregiousness not seen before."

The report continues, revealing the heartless ways in which these drug makers and distributors couldn't possibly care less about their role in the opioid crisis.

Watch the shocking video below: