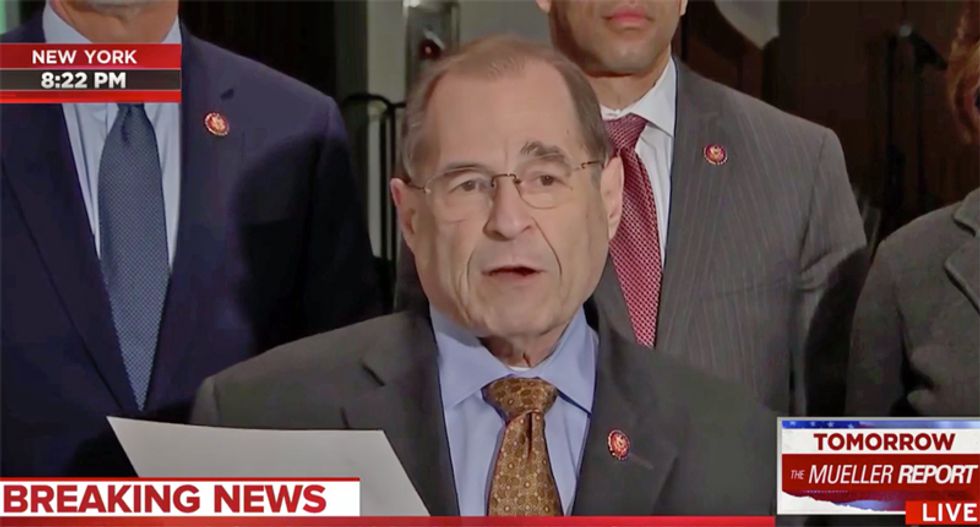 Rep. Jerry Nadler (D-NY) holding a press conference on the eve of the release of the Mueller report (screengrab)

"The Attorney General appears to be waging a media campaign on behalf of President Trump -- the very subject of the investigation at the heart of the Mueller report," Nadler said. "Rather than letting the facts of the report speak for themselves, the Attorney General is taking unprecedented steps to spin Mueller's nearly two-year investigation."

Nadler then laid out four arguments against Barr.

"One, he summarized the report and cherry-picked findings in his March 24th letter to Congress," he charged.

"Two, he withheld summaries written by the special counsel that were intended for public consumption," he continued.

"Three he briefed the White House before providing Congress a copy that helped them prepare a rebuttal response for the president," he said.

"And now, the evening before the report's scheduled release, the Department of Justice has informed the committee that it will receive a copy between 11:00 and noon -- well after the Attorney General's 9:30 a.m. press conference," Nadler said. "This is wrong."

Following Nadler's comments, the chairs of five committees called on Barr to cancel his press conference.

"The Department of Justice announced today that the Attorney General will hold a press conference tomorrow morning before Congress has even seen Special Counsel Mueller’s report," the statement said. "This press conference, which apparently will not include Special Counsel Mueller, is unnecessary and inappropriate, and appears designed to shape public perceptions of the report before anyone can read it."

“In addition, we understand from press reports that the Department of Justice has had ‘numerous conversations’ with lawyers from the White House about the report, which ‘have aided the President’s legal team as it prepares a rebuttal to the report.’ There is no legitimate reason for the Department to brief the White House prior to providing Congress a copy of the report," the statement continued.

"The Attorney General should cancel the press conference and provide the full report to Congress, as we have requested. With the Special Counsel’s fact-gathering work concluded, it is now Congress’ responsibility to assess the findings and evidence and proceed accordingly," the statement concluded.