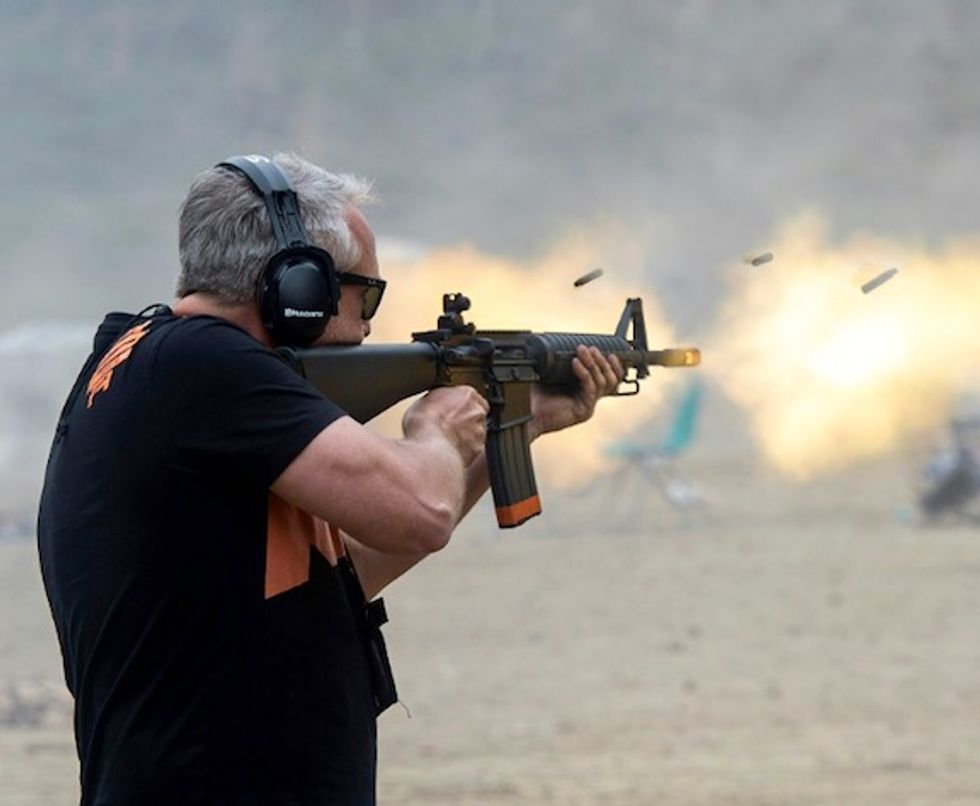 Paul Winters has been coming to the Knob Creek Gun Shoot since 1992 to blast away at targets with machine gun rounds.

"This is Disneyland with guns," Winters said of the two-day event held twice a year in the hills of Kentucky near the hamlet of West Point.

"This is a place to come compete and have fun with your buddies," he said.

The Knob Creek Machine Gun Shoot and Military Gun Show was started in 1965 by Biff Sumner and a few friends who were having a cookout and firing off weapons for fun.

It has evolved into the biggest private machine gun shoot in the world, attracting thousands of automatic weapons enthusiasts from around the United States and abroad.

General admission is $15 a day for adults and $5 for children under 12.

The rapid fire thumping of automatic gunfire is never far away as machine guns riddle abandoned cars, old appliances and other targets with bullet holes at the Knob Creek Gun Range.

Machine gun owners can reserve spots on the main firing line, but there is a waiting list of up to 10 years.

Visitors who don't own a weapon can rent a machine gun -- cash only -- if they sign a waiver and are over 18 years old.

"You can shoot anything that goes bang if you got enough money for rental," said Winters.

There are shooting competitions featuring sub-machine guns, shotguns and pistols.

At the Military Gun Show that accompanies the shoot, vendors sell everything from guns to ammunition. An extensive amount of German World War II memorabilia is also on offer.

Each day ends with a "night shoot" with thousands of tracers bouncing off their targets into the night sky and setting off fireworks attached to barrels of fuel.

Kenny Sumner is the current owner and manager of the Knob Creek Gun Range.

"It is in the United States because we have that luxury of being able to own guns, especially machine guns," Sumner said.

"There is a little paperwork that you have to go through -- background checks on the full auto stuff," he added.

Title 1 weapons are ordinary firearms such as rifles, pistols and shotguns.

The next machine gun shoot takes place in October.

Oath Keeper indictments show Jan. 6 could have been much worse

Indictments against Oath Keepers co-founder Stewart Rhodes and 10 others serve as a reminder that the Jan. 6 insurrection could have been much worse.

The right-wing paramilitary group attempted to make a coordinated move on the Senate chamber, according to the seditious conspiracy indictment, and "tried to push their way through" a line of police officers who "forcibly repelled their advance" -- and seemingly stopped them from executing their mission, reported CNN.

Disgraced cop uses glowing letter from Capitol security to contest obstruction charges — but he got it by mistake: report

On Friday, POLITICO reported that disgraced Capitol Police officer Michael Riley, charged with obstruction of the investigation of the January 6 Capitol insurrection, is defending himself, in part, with a letter issued to him praising his "professionalism."

"In a lengthy court filing, Riley — who retired in December, just weeks after he was charged — appended a letter of congratulations from top Capitol security officials. The letter, signed by Capitol Police Chief Thomas Manger, as well as the House and Senate sergeants-at-arms and the architect of the Capitol, hailed Riley for a 25-year career of 'honor and distinction,'" reported Kyle Cheney. 'Through your years of service with the United States Capitol Police, you have consistently demonstrated the leadership and integrity which are absolutely essential in law enforcement excellence,' the security leaders wrote in the Dec. 2 letter. 'Your attention to duty, professionalism and dedication are above reproach.'"